Revealed: official plan to save Venice from flooding sacrifices St Mark’s basilica for Marghera, the industrial port of Venice

The mobile barriers have at last held back a flood, but they will not be raised to protect the low-lying parts of town 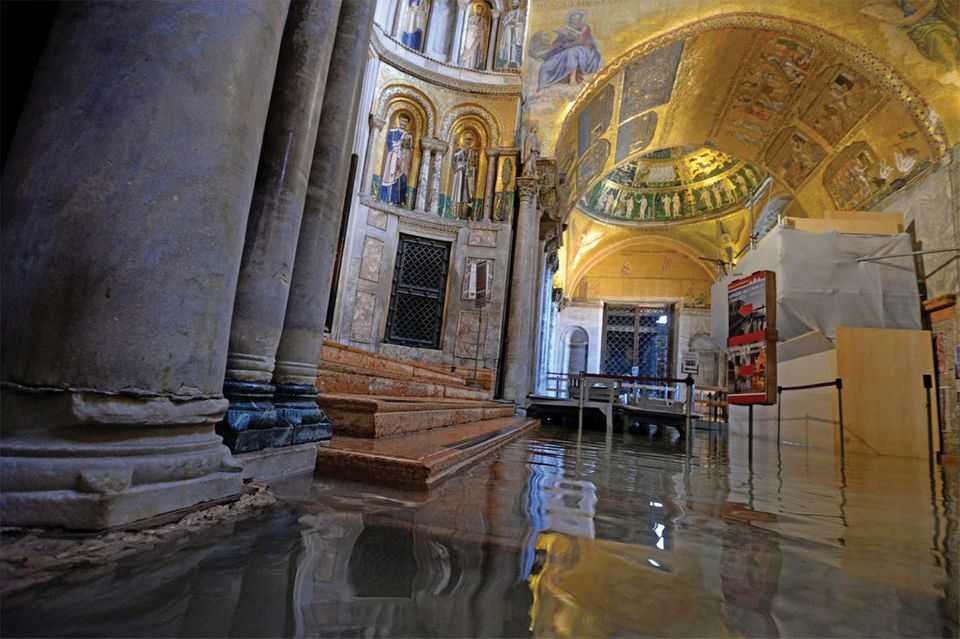 In Venice, a comfortable relationship with the water depends on a few centimetres. Barbara del Vicario has an apartment on the ground floor of a palazzo on the Grand Canal. She knows that when the water reaches 105cm it will flood, as it did ten times in 2019. In the basilica of St Mark’s—the only survivor of the full splendour of Byzantium, all gold and porphyry purple, with saints and Bible stories in the mosaics above and precious stone inlay beneath your feet—the entrance fills with water at 86cm, just 6cm above a “normal” high tide.

On Saturday 3 October, neither the apartment nor the basilica flooded, because the mobile barriers at the three openings between the sea and the lagoon were raised for the first time in reaction to a flooding event. The Gazzettino newspaper reported that Venetians in St Mark’s Square were moved to tears because, for the first time in history, an acqua alta had been stopped.

The meteorologists had predicted a flooding event of 130cm, caused by strong winds, a low-pressure weather system and a high tide. The barriers, known as Mose, which have been under construction since 2003, have become infamous for the political rows they have engendered; corruption scandals leading to soaring costs, now at €5bn; delays, and doubts as to whether they will work. “I said they would work, and they do work,” says Alberto Scotti, the engineer who designed them and has followed their construction from the first.

On this occasion, they were raised when the water was at 70cm, but from now until the end of 2021, he says that they will be raised only when the water reaches 130cm. At this point, 69% of the town will be affected, Del Vicario’s flat will be badly flooded, and the entrance of St Mark’s will be inches deep in water. This apparently perverse decision, made by the Consorzio Venezia Nuova which is responsible for Venice’s flood protection, is mainly because a major problem has arisen. Seven ships were held up for five hours outside the lagoon by the barriers, and the port authority is objecting. Scotti says that over the past 20 years the port has signed numerous protocols to the effect that the protection of the city would have priority, but now it is trying to make its interests prevail.

And these economic interests are considerable. The vast cruise ships have had all the publicity, but the serious economic pressure actually comes from the part of the Venice port at Marghera on the landside of the lagoon. It has major political clout because, with the cruise ship port in Venice, and a smaller port at Chioggia, it is the eighth biggest in Italy, strategically connected by rail and road, employing 21,175 people and involving 1,260 businesses, according to the port authority’s own statistics. It represents 27% of the economy of the Commune of Venice, which extends deep into the mainland and has four times as many voters as the historic town of Venice. Not for nothing was Luigi Brugnaro, a “business first” mayor who lives on the mainland, re-elected in this September’s elections.

Someone has to pay if a cargo ship is delayed in unloading its cargo, usually the charterer or, in the case of bulk carriers, the owner of the cargo—and the port at Marghera is mostly for bulk carriers for petrochemical products, foodstuffs, coal and suchlike. Either way, a port that causes delays is likely to lose business, hence the opposition to the barriers by the port authority. The long-standing plan is eventually to raise the barriers at 110cm, which, however, is still sacrificing the lowest-lying part of the city, St Mark’s, to commercial interests, as to protect them the barriers would need to be raised at 80cm to 85cm. In 2018, this area was affected 121 times by acque alte of up to 110cm, so the Procuratori (administrators) of the basilica are considering what special measures they can devise to protect their 900-year-old church, as the heart of Venice and a Unesco World Heritage Site. 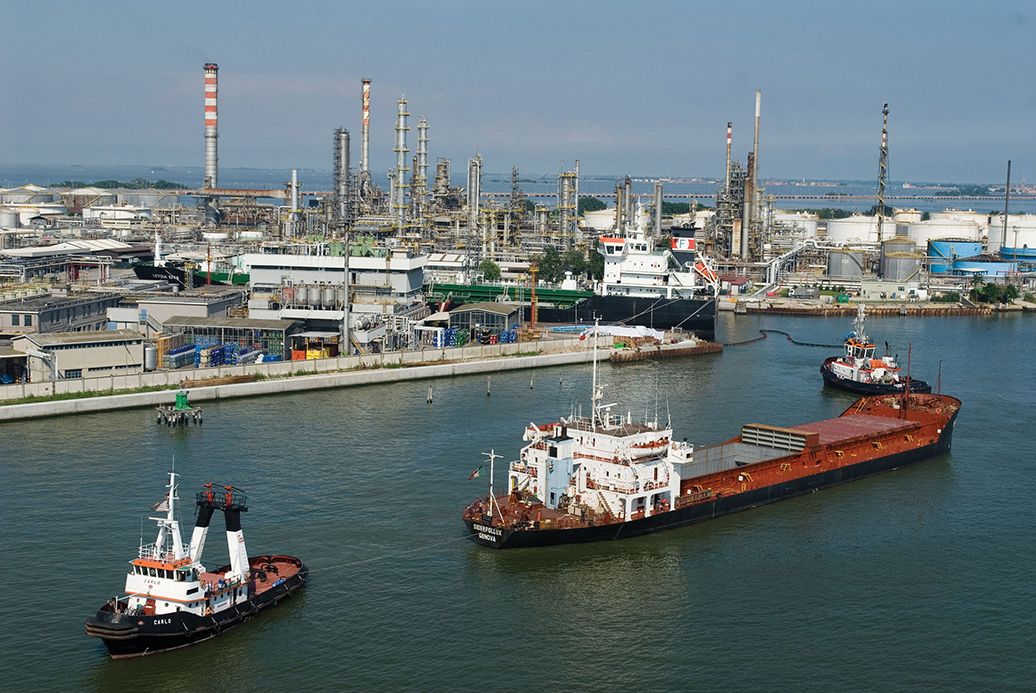 The business needs of the port, which handled 165m tonnes of cargo in 2019, have been prioritised over Venice’s low-lying buildings Credit: Andia / Alamy Stock Photo

The official reason for the 110cm threshold is that it limits the amount of time the lagoon will be cut off from the sea and thus for pollution to accumulate, but the barriers will have to be closed ever more frequently in any case due to sea-level rise. The 2019 report of the IPCC (Intergovernmental Panel on Climate Change), the most authoritative body on the subject, predicts that, if we limit global warming to an increase of two degrees centigrade, which most experts think is unlikely, sea-level rise will be 30cm to 60 cm, but, if not, it foresees a 60cm to 100cm rise, at which point the very survival of Venice is in doubt, unless new, as yet unknown protective measures are devised.

Scotti is aware of this and, while he says the barriers will be effective up to 60cm, he admits that how they get used raises major policy issues. A new agency was announced by the government in August, the Agenzia di Venezia, whose job will be to manage the barriers and their maintenance, expected to cost €50m a year. Scotti says that he hopes its head will be Elisabetta Spitz, the tough “super-commissario” who was brought in to administer the completion of the barriers, but he says that she is not interested in long-term thinking at present. He says that after all the scandals and polemics, so far as central government is concerned, “Venice is the devil”—an expensive headache for a political system that is good at reacting to a crisis, but bad at planning for the long term. He believes that it is time for the campanilismo (defence of one’s own backyard) to end, and for the authorities to recognise that the days of the commercial port inside the lagoon are numbered and it should be moved to Monfalcone, a port north-east of Venice near Trieste, with only small ships entering the lagoon in future.

Tom Spencer, the professor of coastal dynamics at Cambridge University and the organiser of the last, comprehensive survey of knowledge about the Venice lagoon, in 2003, says that to prepare for sea-level rise, Venice and the Italian government might consider looking at the approach of the UK Environment Agency, which manages the Thames Barrier that protects London and is planning as far ahead as 2100. The agency is already collaborating with the other main barrier cities, St Petersburg and Rotterdam.

Andreina Zitelli, a biologist at Ca’ Foscari University, Venice, and a past adviser to the government on the environment of the lagoon, recalls the proposal of the late Bruno Visentini, an eminent citizen of Venice who in the 1970s said that the city needed a special administrative status to take account of the many interconnecting challenges facing it.

Sneska Quaedvlieg-Michailović, the secretary general of Europa Nostra, believes that it needs the involvement of the European Union, possibly as part of its Green Deal, which has committed a trillion Euro over the next ten years to greening the economy of Europe. One thing is certain, though. This first successful employment of the Venice barriers is only the beginning. The difficult part is yet to come.

Appeared in The Art Newspaper, 328 November 2020
More NewsTopicsVenice in Peril