No firm date is set amid San Francisco quarantine, but museum is inviting artists to take part and sell their work

At a time when most US museums are hunkering down in response to the coronavirus (Covid-19) pandemic and mainly promoting their online offerings, the Fine Arts Museums of San Francisco (FAMSF) say they plan to physically open a juried exhibition of local artists this summer on the resonant theme of “On the Edge”.

FAMSF did not give an opening date for the show, to be held at the de Young Museum, since it is still uncertain when the city can lift its “shelter in place” order requiring San Francisco residents to stay home unless they are filling essential needs. (The order, which was to expire on 7 April, was today extended until 1 May.) The de Young and the Legion of Honor, FAMSF’s other museum, have been closed since 14 March in response to the pandemic.

The exhibition, in which artists from nine Bay Area counties will be invited to submit their work, is aimed at supporting those artists through difficult times, the museum says. Artists will be encouraged to offer their work for sale and be allowed to retain 100% of the proceeds.

“It’s never easy being an artist, but especially now,” says Thomas Campbell, the director and chief executive of FAMSF. “We’re announcing it so that artists can be working [on submissions] during the shelter-in-place orders. As soon as we can get the museum up and running again, this will be a way to welcome the community.”

Campbell said the idea for the exhibition originated months ago when museum officials were considering ways of marking the de Young’s 125th anniversary this year. He had been thinking of staging it toward the end of 2020. “And then, in light of this extraordinary time and our having to postpone other exhibitions” because of the coronavius, “we realised it would be a great opportunity to advance this idea, and do it as soon as we can reopen.”

The theme of “On the Edge” derives from “I am dancing. On the edge of the world I am dancing,” part of an ancient song of the Ohlone, a Native American people of the Northern California coast, FAMSF says. The exhibition will be juried by a combination of curators and local art world representatives, who will bestow awards in different categories like landscape, portrait, still-life and narrative. 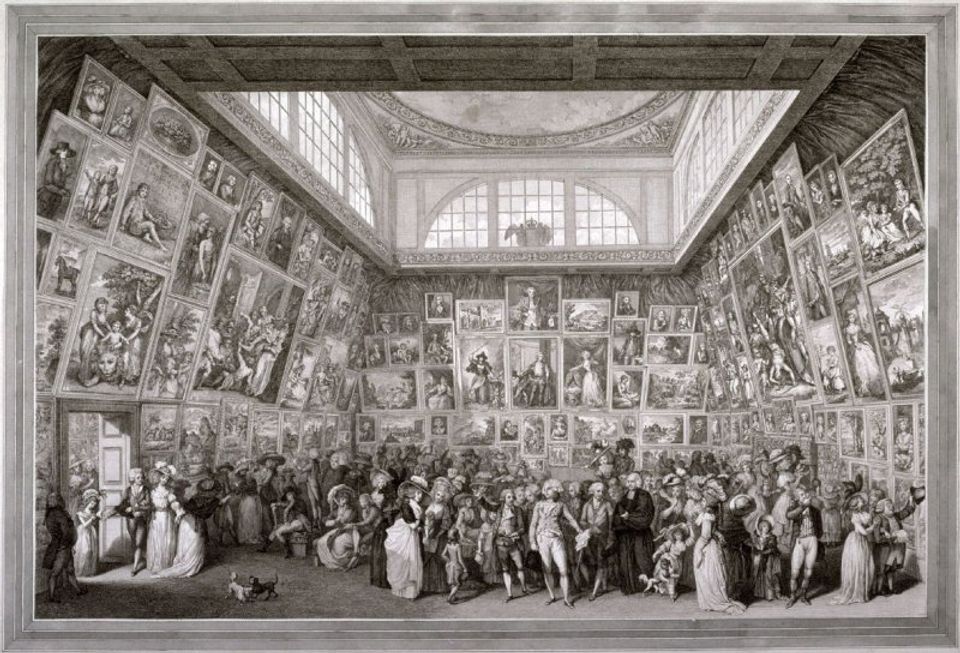 An engraving of The Exhibition at the Royal Academy, by J.H. Ramberg (1787) Fine Arts Museums of San Francisco

Campbell says the de Young “wants to squeeze in as much as we can and hang it academy style” in the museum’s Herbst galleries, similar to the Royal Academy of Arts's popular Summer Exhibition. Works must be in a traditional format–painting, drawing, engraving, photography or sculpture–and should not measure more than 6ft by 6ft. FAMSF said that a diverse range of artists, from self-taught amateurs to professionals, were being urged to apply.

Among the de Young shows that have been postponed as a result of the pandemic is Frida Kahlo: Appearances Can Be Deceiving, which was due to open on 21 March and had already been installed, and a Judy Chicago retrospective that had been scheduled to open on 9 May that has now been deferred to June 2021. Last Supper in Pompeii: From the Table to the Grave, on the theme of feasting, had been due to open at the Legion of Honor on 18 April, but Campbell says much of the art remains in crates in Naples, Italy.

He says he hopes that the de Young’s invitational stimulates similar efforts at other US museums. “In this country we don’t have Culture Ministry funding, and we need to do everything we can to help out artist communities because they bring richness and joy to so many lives,” Campbell adds. “We all need something positive, something hopeful in this difficult time.”