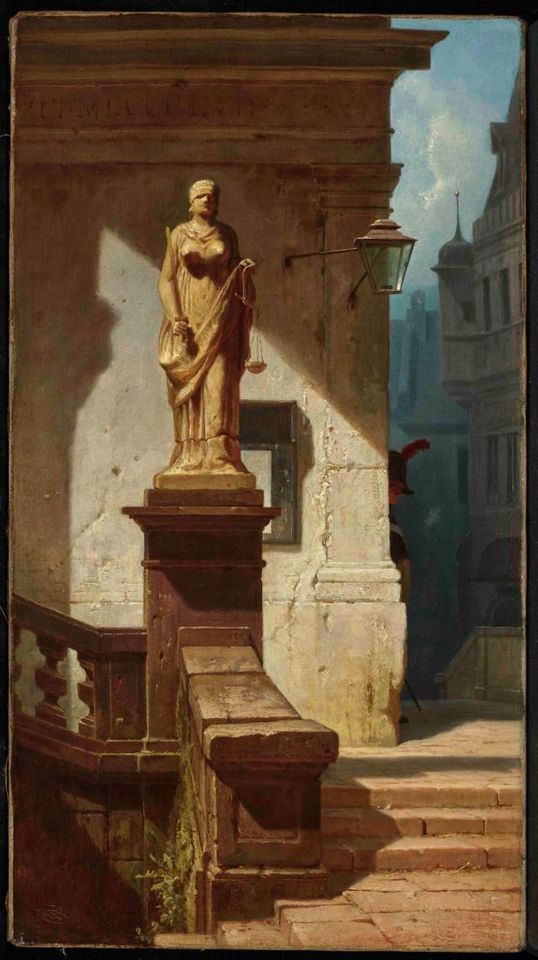 A painting by Carl Spitzweg that was sold under duress in the Nazi era and hung for decades in the German president’s villa is the highlight of a sale later today at the Munich auction house Neumeister, the first art auction with a live audience after the coronavirus lockdown in Germany.

The company sought permission from the city of Munich to hold the auction, and received a green light on 4 May, provided the sale complies with social distancing rules for retailers that limit openings to shops less than 800 sq. m in size and restrict the number of customers at one time.

A maximum of 20 people will be able to participate, Neumeister says. Those wishing to attend were requested to register online in advance. Anyone who prefers not to attend in person can follow the auction live online.

“After almost two months, it is now time to inject some impetus back into the art market,” says Katrin Stoll, the chief executive of Neumeister.

Justitia shows a stone sculpture of the figure of justice watched, surreptitiously, by a policeman. On close inspection, it becomes clear that the sculpture is severely damaged with a big crack in the stonework above her ankles. Her scales are broken, and the blindfold symbolising impartiality has ridden up above her eyes. The work, designed to foil the censors, was a political criticism of the German justice system in the post-revolutionary era.

The painting belonged to the Jewish tobacco merchant Leo Bendel, a Pole who lived in Berlin. He sold two works by Spitzweg at Galerie Heinemann in 1937, when he fled to Vienna. He was arrested by the Gestapo in 1939 and deported to Buchenwald where he died six months later, at the age of 71.

Justitia was purchased for Adolf Hitler’s planned Führermuseum in Linz by the Munich dealer Maria Almas Dietrich. After the war, it wound up in the Central Collecting Point for art managed by American troops in Munich. Its original owner could not then be determined, so it became the property of the German government and hung in Villa Hammerschmidt, where successive presidents entertained international guests, until it was identified as lost due to Nazi persecution in 2006. Bureaucratic hurdles meant that it took more than ten years for the painting to be returned to Bendel’s heirs in 2019.

Neumeister is a few weeks ahead of auction houses in Paris, which are also gearing up for live sales. Christie’s first live auction in the French capital, scheduled for 26 May, focuses on French collectors’ items; the second, a sale of rare books, is scheduled for the following day. Sotheby’s is holding a jewels sale in Paris on 10 June, and Artcurial has scheduled a live auction of 20th-century furnishings on 19 May followed by a sale of books and prints the day after.

UPDATE (8 MAY): "With high security and health and safety precautions, [the auction] took place with bidders once again present on the premises for the first time since the pandemic. The top lot, Carl Spitzweg's masterpiece Justitia (1857), achieved the best result... with a gross sales price of €698,500 euros [with buyer's premium]," says a statement from Neumeister.