The banner, thought lost for more than 40 years, was recently authenticated by a vexillographer who had worked with the artist 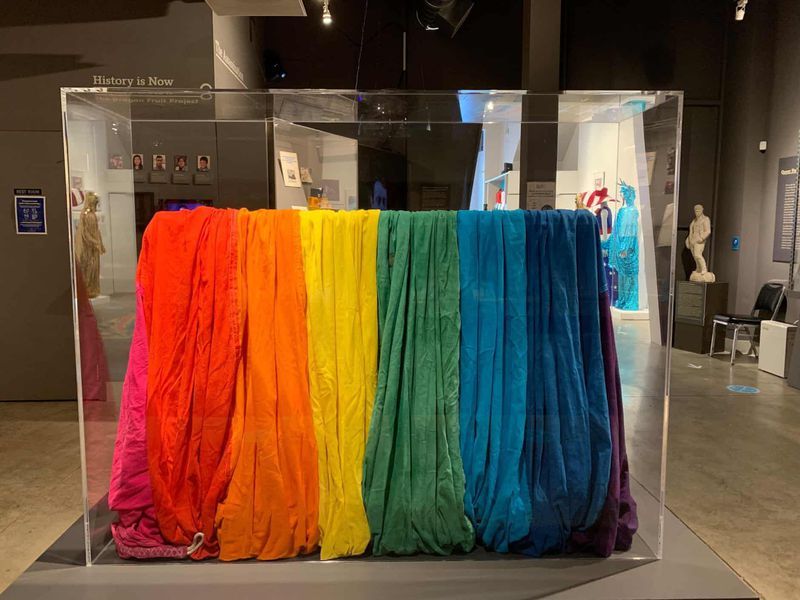 A segment of the original rainbow flag, designed and created by the late artist Gilbert Baker for the San Francisco Gay Freedom Day Parade in June 1978 and thought to be lost since then, was recently rediscovered and donated to the city’s GLBT Historical Society Museum and Archives. To celebrate the start of Pride Month in early June, the hand-stitched and dyed 28ft-long banner, which has become an important symbol of queer identity, has been permanently installed in the museum.

“People hang it in small towns and in countries where they still experience a lot of oppression, but it also has become a political statement to say that we exist, we have the right to love who we want to love and to participate as full members of society,” the museum’s executive director, Terry Beswick, told the local public news station KQED.

Baker, who worked at the Paramount Flag Company in San Francisco in the 1970s, created two monumental flags with the help of volunteers including fellow artists Lynn Segerblom, James McNamara, Glenne McElhinney, Joe Duran and Paul Langlotz. Each featured eight stripes in a rainbow of colours: pink to represent sex, red for life, orange for healing, yellow for the sun, green for nature, turquoise for magic and art, blue for serenity and purple for spirit, according to the artist’s foundation. (The colours were later reduced to six as hot pink was too expensive to mass produce.) One version also had a square of blue and white tie-dyed stars. Both flags were raised at San Francisco’s United Nations Plaza during the 1978 Gay Freedom Day celebrations.

“It was necessary to have the Rainbow Flag because up until that we had the pink triangle from the Nazis—it was the symbol that they would use [to denote gay people]," Baker said in an interview with New York’s Museum of Modern Art in 2015 when the institution acquired his design for its permanent collection. "We needed something beautiful, something from us. The rainbow is so perfect because it really fits our diversity in terms of race, gender, ages, all of those things.”

The flags were then stored in a local community centre, where they became damaged by mildew, but Baker was able to salvage a portion of one and kept it until his death in 2017, when his possessions were all given to his sister, according to Charles Beal, the president of the New York-based Gilbert Baker Foundation. When the organisation was looking for a flag to carry in a parade marking the 50th anniversary of the Stonewall protest in 2019, Baker’s sister mailed them the eight-coloured banner from the artist’s belongings. But it would take a vexillographer, or flag expert, to identify the object as one of the historic originals.

Soon after the Stonewall parade, James Ferrigan, who had worked with Baker at the Paramount Flag Company in San Francisco, called Beal to ask about the first rainbow flag, which he remembered seeing in the artist’s San Francisco apartment in the early 1980s. “When Ferrigan described the flag, Beal suddenly realised this artefact was gathering dust in his closet,” according to a statement from the museum.

After a bit of detective work, which involved bringing the flag from New York to San Francisco, where Ferrigan was able to identify the stitching and grommets done at Paramount, the object was declared “without doubt” the original, with an official vexillological report prepared confirming its provenance. In June, the flag was unveiled at the GLBT Historical Society Museum and Archives as the centrepiece of the ongoing exhibition Performance, Protest and Politics: The Art of Gilbert Baker.

“A flag is different than any other form of art,” Baker told MoMA of his decision to create the original banner. “It’s not a painting, it’s not just cloth, it is not a just logo—it functions in so many different ways.

“I thought that we needed that kind of symbol, that we needed as a people something that everyone instantly understands,” the artist said. “[The Rainbow Flag] doesn’t say the word ‘Gay’, and it doesn’t say ‘the United States’ on the American flag, but everyone knows visually what they mean. And that influence really came to me when I decided that we should have a flag, that a flag fit us as a symbol, that we are a people, a tribe if you will. And flags are about proclaiming power, so it’s very appropriate.”