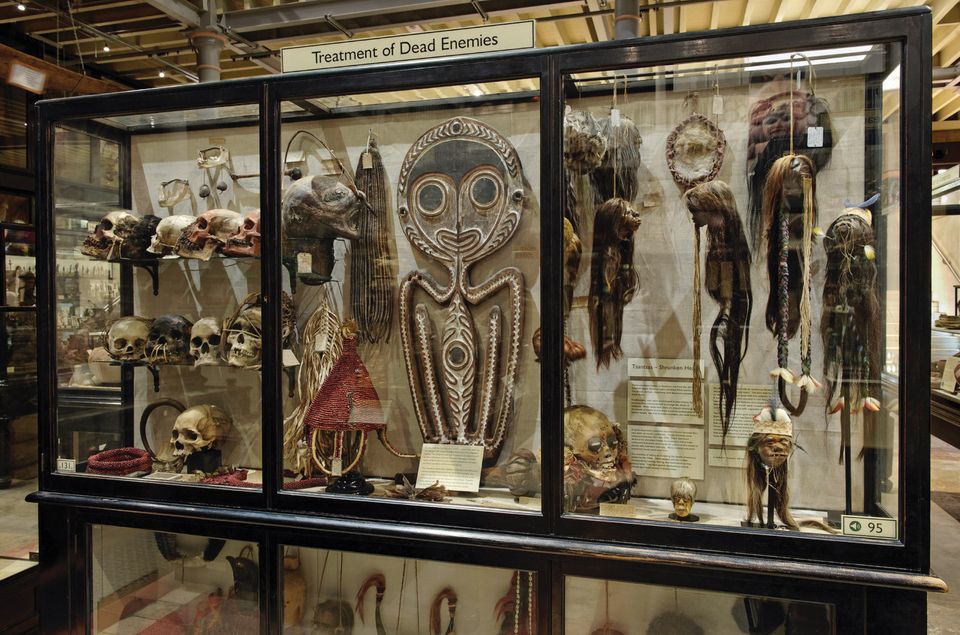 The Pitt Rivers Museum in Oxford is reconsidering its display of shrunken heads, which are currently shown in a case labelled Treatment of Dead Enemies. These human heads with skin and hair, known as tsantsas, were made by the Shuar and Achuar people of Ecuador and Peru—up until the 1960s.

The tsantsas are the museum’s most famed objects. Michael O’Hanlon, the previous director, says the most commonly asked question by visitors is: “Which case has the shrunken heads?”

Laura Van Broekhoven, who took over as director of the Pitt Rivers Museum two years ago, is rethinking the museum’s displays, including the tsantsas, and is consulting with representatives of the Shuar community.

She has an open attitude on what should be done, with repatriation to Ecuador a possibility: “If we conclude it is inappropriate to show the tsantsas, they might be taken off display. So far, we have no indication that this is the case. But all options are on the table.”

Dating back to the 1940s, the Treatment of Dead Enemies display at the Pitt Rivers contains examples of human remains and associated objects from around the world, including four tsantsas with long hair.

Until now the museum has not allowed its official photograph of the display case to be reproduced by the media, because of concerns over sensationalism. But it has exceptionally granted The Art Newspaper permission to publish the image.

Van Broekhoven points out that the Treatment of Dead Enemies display is both “cherished and feared” by visitors: “Many think of these objects as bizarre, gruesome, barbaric, a ‘freak’ show. The practice of headhunting, instead of being better understood, is misunderstood entirely. The Shuar communities do not want to be represented in these stereotypical ways.”

The review of the tsantsas is being undertaken as part of a wider project, entitled Labelling Matters, which will reconsider the Pitt Rivers Museum’s historic labels, some dating back to its foundation in 1884. The museum is also applying to the Arts and Humanities Research Council for funding to undertake provenance research on the tsantsas and to invite Ecuadorian researchers and Shuar representatives to Oxford.

Run by the University of Oxford, the museum is placing great emphasis on fostering cross-cultural understanding. Van Broekhoven believes it is vital to involve representatives of the Shuar community, who number around 40,000.

The museum recently signed an agreement with Quito’s University of San Francisco to collaborate with Shuar representatives to discuss the tsantsas. Maria Ordoñez, the leader of the Quito-based research project, says they hope to study the tsantsas using technology such as CT scanning and DNA analysis.

One of the challenges is that the Shuar people are now involved in difficult and divisive decisions over concessions for mineral exploitation on their lands, making it more difficult for them to focus on cultural matters.

Van Broekhoven is also only too aware about the ethical sensitivities surrounding the original acquisition of tsantsas, since in some cases this involved violent and criminal behaviour by collectors who were responding to the appetites of museums.

This has been examined by the anthropologist Frances Larson in her recent book on severed heads: “Collectors behaved in a way that would have been criminal at home… Some stole the dead from hospital morgues, bought bodies from prison, offered people goods in exchange for bits of their dead relatives or asked the locals politely for enemy body parts after battles and raids.” Arguably it is inappropriate for museums to display human remains acquired in such circumstances.

Along with the Pitt Rivers Museum, tsantsas are held by most major museums of ethnography, such as the Smithsonian’s Natural History Museum (Washington, DC), Quai Branly (Paris) and Ethnographic Museum (Berlin). The largest collection is at the Museo Pumapungo in Cuenca, Equador, which is a partner in the Quito university project.

What exactly are shrunken heads?

The shrunken heads, or tsantsas, were made by the Shuar and Achuar people who live in the rainforests of Ecuador and Peru. They were created by peeling back the skin and hair of a human skull of a dead male enemy, with the bones, brain and other matter being discarded.

The skin and hair were then soaked briefly in hot water, with sand poured inside the cavity. This process was repeated several times, with the facial features shaped after each stage. The eye sockets and mouths were sewn shut to prevent what is regarded as the dead man’s soul escaping. The resulting shrunken heads are the size of a large orange.

The purpose of taking and preserving the heads of enemies was to obtain the powers that had been located in them. It was not the head that was important, but the deceased man’s soul. The concept of the tsantsa is that if someone does not die, then someone else cannot be born. Head-hunting was a way of circumventing this limitation by appropriating the identity of someone from another group.

From the 1870s to the 1930s tsantsas were acquired by foreigners near the Ecuadorian and Peruvian borders, most of whom had gone there to find Chincona trees, whose bark is a source of quinine, which was used to treat malaria. Demand for tsantsas quickly outgrew supply, which led to the creation of fakes to meet demand.

The Pitt Rivers Museum has 12 tsantsas, which were acquired from six different collectors from 1884 to 1936. Of the dozen, seven are human. Two are sloth and three are monkey, made to to satisfy demand from collectors. Of the seven human heads, three are now deemed to have been authentically created for ritual purposes and four were probably made sale from corpses somehow acquired from morgues or hospitals.