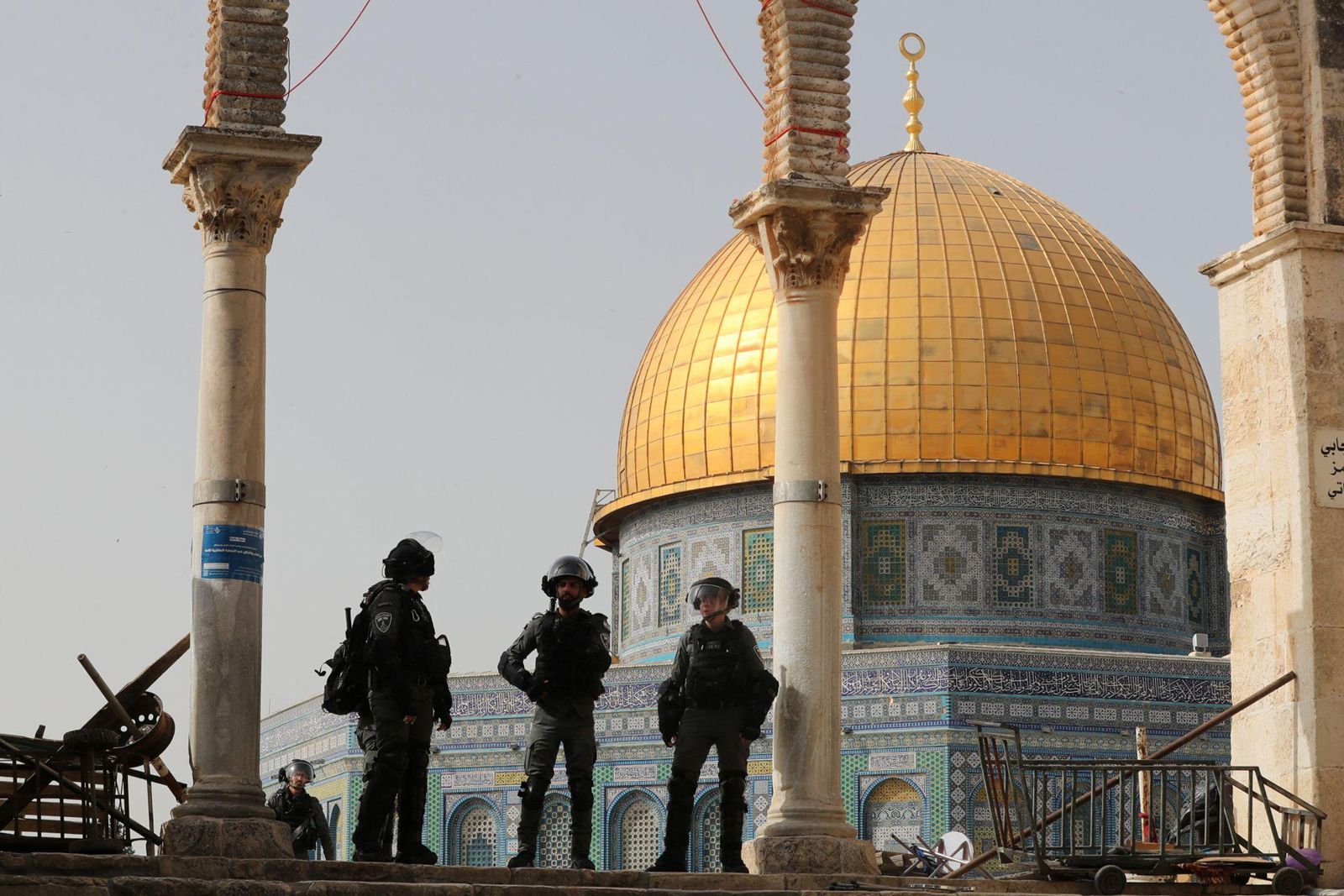 Israeli police stand in front of the Dome of the Rock during clashes with Palestinians at the compound that houses Al-Aqsa Mosque, known to Muslims as Noble Sanctuary and to Jews as Temple Mount, in Jerusalem's Old City © Reuters/Ammar Awad

The Turner Prize-nominated artist Lawrence Abu Hamdan turned over his Instagram account to fellow artist Inas Halabi on Tuesday night as she reported live from Haifa on the continued police crackdowns on protestors in the Jewish-Arab city.

Nightly demonstrations have been taking place all week after hundreds of Palestinians were injured when Israeli forces stormed the Al-Aqsa mosque in Jerusalem on Monday, firing tear gas and rubber bullets at worshippers. Other protests have focused on the threatened forced eviction of dozens of Palestinians from their homes in the middle-class Sheikh Jarrah neighbourhood in East Jerusalem.

Halabi recorded footage on Tuesday evening showing sound bombs being thrown, including a video of a Palestinian protestor who was hit in the eye by one of the stun grenades. As Hamdan later points out, the flash from sound bombs is temporarily blinding. The volume of the detonation also causes temporary deafness and disturbs the fluid in the ear, causing a loss of balance.

The Palestinian actress Maisa Abd Elhadi, who starred in the artist Larissa Sansour’s film, In Vitro, at the Danish Pavilion at the 2019 Venice Biennale, is reportedly among those to have been injured by a stun grenade in recent days.

Other footage shot by Halabi captures police on horseback trampling over peaceful protesters and, elsewhere, Israeli forces using “skunk water”. She says: “Skunk water was used nonstop whenever a group of people gathered. Its stench stays on you for three to four days no matter how many showers you take. Skunk water is one of the tactics used besides tear gas, running over protesters with horses, stun bombs, excessive force and illegal arrests.” Israeli protesters, meanwhile, are shown being protected by the police.

Halabi is among those calling on the international community to adopt a strategy of non-violent pressure inspired by the South African anti-apartheid movement and the US civil rights movement. She says: “If, for any reason, you are currently not boycotting Israel, its economy and institutions (especially the artistic and cultural ones who whitewash the colonial reality in Palestine), in every single way you can, then I urge you to do so.”

The organising collective, Artists for Palestine UK, also reiterated calls to boycott Israeli arts bodies. “We believe that artists and arts organisations must sever links of complicity with Israeli institutions now. We think artists and arts producers should collectively refuse to engage with a system that oppresses Palestinians. We should build pressure on our own governments to take action. They must hold Israel to account for its violations of Palestinian rights and end Israeli impunity. We see this as a moral obligation to uphold human rights and oppose injustice.”

The latest violence comes after weeks of rising Israeli-Palestinian tension in East Jerusalem. Last Friday, thousands of worshippers gathered at the Al-Aqsa mosque compound to pray on the last Friday of the holy month of Ramadan, but were met with huge police presence.

Al-Aqsa is Islam’s third holiest site and is one of the most important cultural locations in the world. The area the mosque sits on, called the Temple Mount by Jewish people, is the also the holiest site in Judaism and overlooks the Western Wall, a place of prayer and pilgrimage.

Israeli police are reported to have fired rubber bullets and stun grenades to disperse worshippers, injuring more than 200 people, mostly Palestinians. One stun grenade entered the mosque. Police said Palestinians had thrown rocks, fireworks and other objects at officers.

On Monday, the violence escalated when Hamas fired more than 200 rockets at Israel. The country responded with 130 strikes by fighter jets, killing 28 Palestinians including ten children. According to the health ministry in Gaza, at least 67 people in Gaza and seven Israelis have been killed. More than 400 people have been injured.

But, as Artists for Palestine UK points out, “the violence of forced displacement, and the police repression that punishes any form of protest or peaceful resistance by Palestinians, is ongoing and has been taking place in many forms, for decades, often without it registering in our news media”.

The group adds: “Palestinians are reminding us that this is the same violence that has displaced, fragmented and repressed Palestinians since the Nakba of 1948 [when more than 700,000 Palestinian Arabs fled or were expelled from their homes]. We think it’s important to recognise the context of what is happening in Palestine as settler-colonialism, as apartheid.”