On the heels of bomb scares in the city, a cultural casualty of Isis is rebuilt in City Hall Park

As the UN General Assembly started in New York, during which hundreds of diplomatic and political dignitaries gather for a week-long discussion on key global issues such as terrorism, a reproduction of the Roman Triumphal Arch of Palmyra, a 2,000-year-old structure in Syria that was destroyed by Isis last year, was unveiled on Monday at City Hall Park in New York.

The rebuilding of the arch, given the climate in the city following the explosion of homemade terrorist bombs in Manhattan and New Jersey on Saturday, “references the value of things like democracy”, says Dr Alexy Karenowska, the director of technology of the Institute of Digital Archaeology, which helped create the replica. It also helps draw connections between cultures. “The arch frames City Hall very beautifully, where the classical architecture of the structures very much mirror one another and shows a great link between Eastern and Western cultural reach,” Karenowska adds. 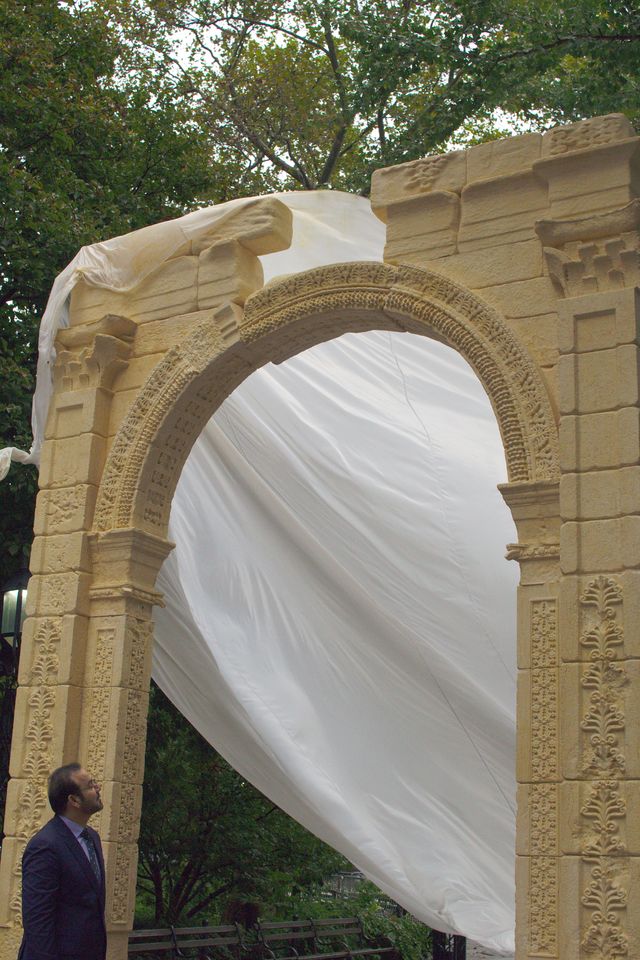 The reproduction of the Triumphal Arch of Palmyra is unveiled at City Hall in New York City (Image: Simon Haisell)

The Institute of Digital Archaeology (IDA), a conservation organisation based at the University of Oxford, worked with Unesco, Icomos and other cultural heritage organisations to create the 25-foot installation, which weighs around 30,000lbs and is made from Egyptian marble.

The arch, previously shown in Trafalgar Square in London last year, will be on view in New York until 24 September. It is slated to travel to Dubai next, and then to Palmyra, where it will be displayed near the site of the original arch.

Correction: This article was updated on 10 October to remove a quote from Mariya Polner, whose comments in a press statement referred to the IDA’s World Heritage Strategy Forum at Harvard University, not the Palmyra arch project.