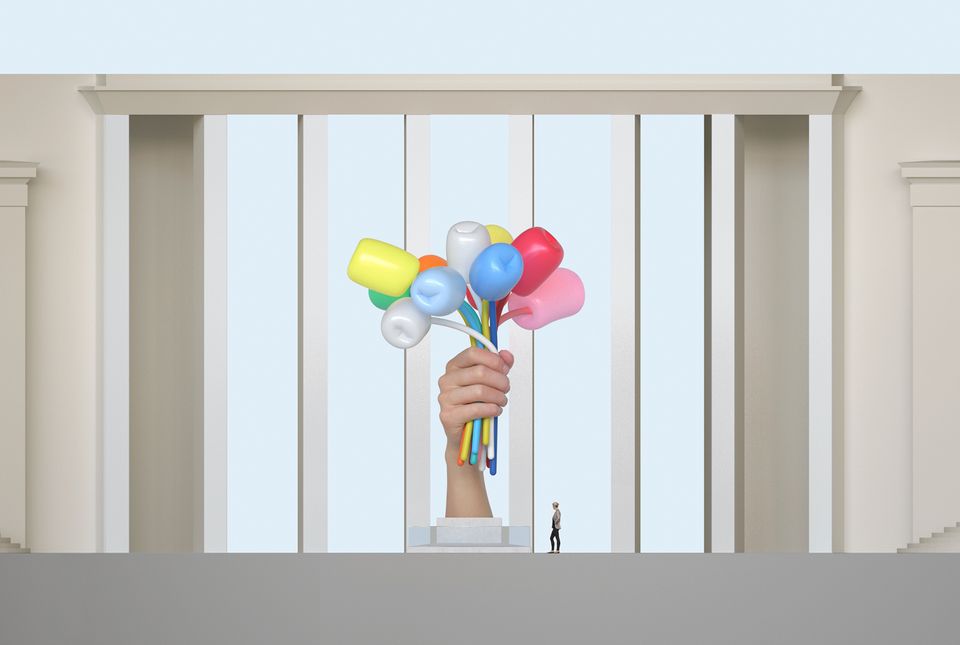 A rendering of Bouquet of Tulips by Jeff Koons Jeff Koons. Courtesy Noirmontartproduction

Jeff Koons' sculpture Bouquet of Tulips, made to pay homage to the victims of the November 2015 terrorist attacks in Paris, is still awaiting authorisation to be installed in front of two museums in the French capital.

The 11m-high sculpture of a hand holding a bunch of 11 tulips (the missing twelfth flower represents those who lost their lives), was conceived by the artist at the request of Jane Hartley, the former US ambassador, who wanted to extend support to France.

“Bouquet of Tulips was created as a symbol of remembrance, optimism, and healing in moving forward from the horrific events that occurred in Paris one year ago,” Koons wrote in a press statement in 2016.

Noirmontartproductions, founded by Jérôme and Emmanuelle de Noirmont who represent Koons in Paris, suggested that the symbolic place for the sculpture would be in front of the Palais de Tokyo and the Musée d'Art Moderne de la Ville de Paris.

Produced with funds from French and US donors, the brightly coloured sculpture has neared completion. But its future home is still undecided and is proving controversial.

According to the French newspaper Le Figaro, the mayor of Paris Anne Hidalgo suggested other sites—such as the park of Passy or La Villette—but Koons was adamant about the proposal. “No other place has the same symbolism and it's a magnificent present from the US to France,” Emmanuelle de Noirmont tells The Art Newspaper, adding that Koons would donate all revenue from the ensuing postcards of the sculpture to the families of the 130 victims from the terrorist attacks for 25 years.

The decision lies in the hands of the French culture ministry, which manages the Palais de Tokyo. The ministry is still mulling Koons' present after receiving complaints from French artists who do not wish to see the flamboyant sculpture in front of the prestigious art centre and musem, according to Le Figaro. ​Other critics think that the gift is ostentatious and self-interested.​ The ministry has not yet replied to The Art Newspaper's questions on the issue.

Antoine de Galbert , the founder of La Maison Rouge art centre, says: “[The work is] a present that's not costing the artist anything; a publicity stunt which would enable him to benefit from the most beautiful place in the world. Furthermore, the financing for this work's production through private sponsorship would generate substantial tax breaks. This work has no artistic interest and is unworthy of a homage to victims of the attacks. There are very great French or foreign artists that are more deserving of this honour.”

The French photographer Raphaël Gianelli-Meriano says: “Placing this artwork in front of the Palais de Tokyo would taint the museum and take up too much of its landscape. Jeff Koons had enough attention with his installations at the Château de Versailles [in 2008-09] without resorting to benefit from the memory of the Paris attacks.”

However, the president of the Palais de Tokyo, Jean de Loisy, would welcome the sculpture in front of his museum. “It will be a splendid work born from an obsessional attention to detail and the symbol from a great artist,” he says. “The space in front of the Palais de Tokyo is not laid out well yet three million people with a passion for art cross it every year; the installation of an artwork and the development of this space is obviously desirable.”