Members of the climate activist group BP or not BP? blocked entry to the museum's show dressed as statues based on Greek mythology 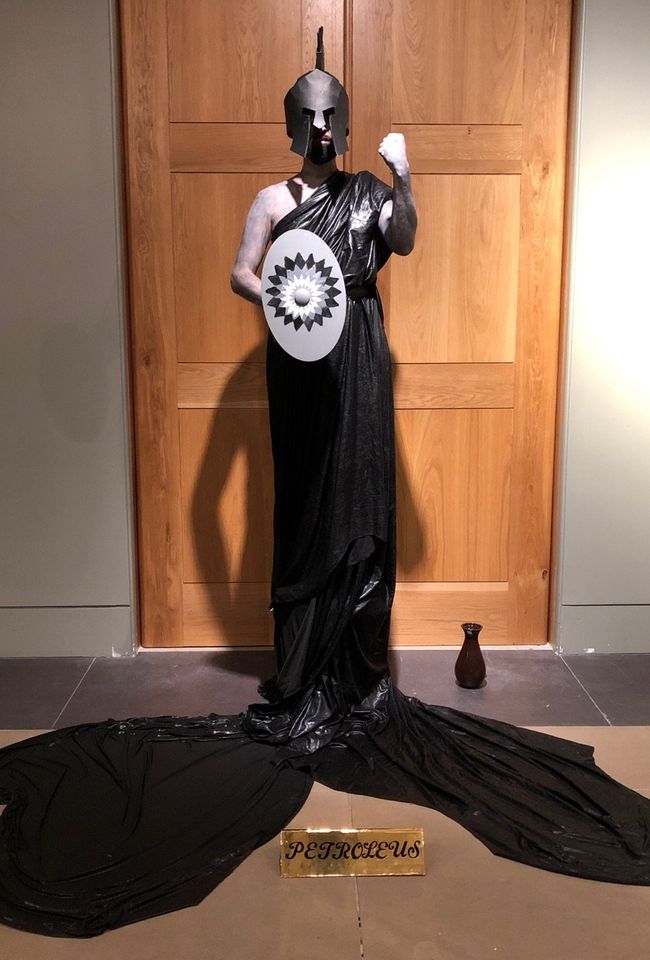 A member of the climate activist group BP or not BP?, dressed as the Petroleus, a tongue-in-cheek addition to ancient Greek mythology Courtesy of Gareth Harris

The climate justice group "BP or not BP?" disrupted the British Museum yesterday evening, in an attempt to prevent guests from seeing the exhibition Troy, Myth and Reality (21 November-8 March 2020) during the VIP private view. The campaign group wants the museum to cut ties with oil company British Petroleum, which is sponsoring the Troy show.

According to a statement from BP or not BP, the launch event was forced to take place in an adjacent gallery. Some guests were later able to view the exhibition but only after an hour’s delay and by awkwardly entering through the gift shop, the group says.

Images on its Instagram feed (@BPnotBP) show members from the protest group blocking five doorways to the exhibition dressed as statues based on Greek mythology and the story of the Trojan Wars.

“Alongside Helen of Troy, Achilles, Zeus and Athena, they added a fifth statue of their own invention, the god Petroleus, who wore a BP logo and an oil slick for a robe,” says BP or not BP. As guests arrived, Petroleus drenched the other statues in oil at the museum entrance, accompanied by a Greek chorus singing: "We foresee the fall of BP!”

Blockading the exhibition is the latest, and most direct intervention, by the group which staged a mass demonstration in February at the museum against BP’s sponsorship of the exhibition I Am Ashurbanipal: King of the World, King of Assyria.

A spokeswoman for the British Museum says: “We did hold the reception in the Egyptian Sculpture Gallery but had planned to do that in any case. The reception went ahead as planned and guests were able to see the exhibition. The British Museum respects other people’s right to express their views and allows peaceful protest onsite at the museum as long as there is no risk to the museum’s collection, staff or visitors.”

In July, Hartwig Fischer, the director of the British Museum, said that BP’s support for the museum over the years has helped “create unique learning opportunities… this sort of support is vital to [the museum’s] mission.”

Earlier this month, National Galleries of Scotland announced that it will no longer host the BP Portrait Award exhibition, saying that this year’s edition will be “the last time” that it stages the show in its current form.