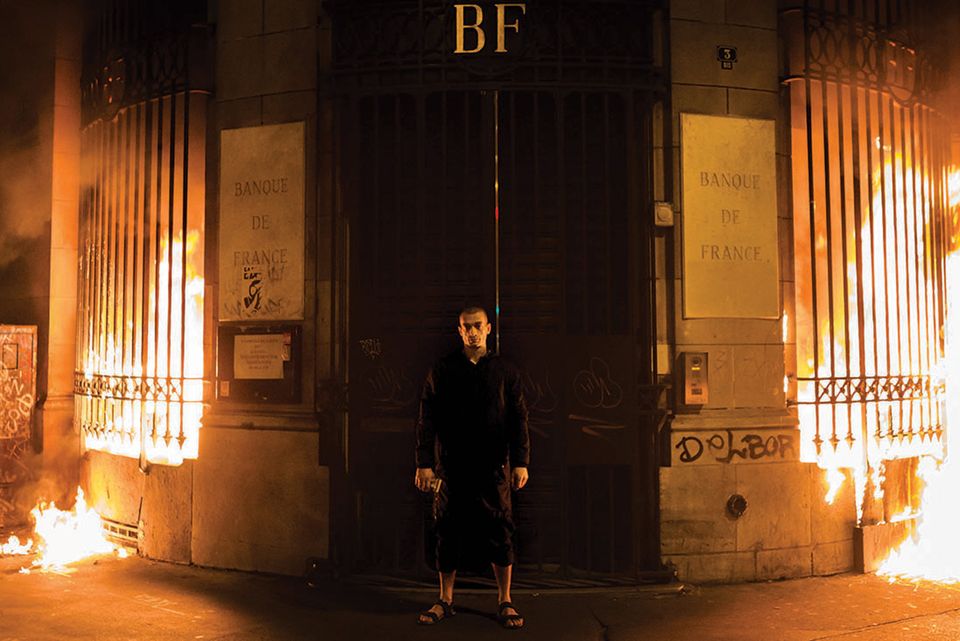 The Russian performance artist Pyotr Pavlensky set fire to an entrance of Bank of France in Paris this weekend. The artist also condemned bankers as the new monarchs in his latest act of political performance art in France, the country that granted him political asylum in May. Pavlensky came to worldwide attention for his previous performances in Moscow, such as nailing his scrotum to the ground in Red Square and setting alight an entrance of the Federal Security Service building.

The prisoners’ rights website MediaZone—created by Pussy Riot’s Nadezhda Tolokonnikova and Maria Alyokhina—revealed details of Pavlensky's performance citing tweets posted yesterday evening (15 October) by a French photographer with images of Pavlensky and the fire. The tweets said that he had been detained by French police at 4.10am the same day he set fire to the bank.

The French photography agency Divergence Image published a photograph with a caption quoting a statement from Pavlensky, in which he denounces “the bankers (who) took the place of the monarchs” and appeals to “the great French Revolution”.

Pavlensky, along with his partner Oksana Shalygina and their two young daughters, traveled to France via Ukraine in January 2017 after fleeing Russia where they were facing sexual assault charges. An actress at a Moscow theatre known for plays questioning Russia’s political and social system, accused them of pressuring her into a sexual encounter that they claimed was consensual.

Many in Moscow’s artistic community had initially championed Pavlensky as a dissident and campaigned for his release from prison. However, some began to question their support after he was stripped of the Vaclav Havel International Prize for Creative Dissent in 2016 for pledging to donate the $42,000 prize money to a radical group convicted of killing policemen in eastern Russia. The sexual assault complaint further polarised opinions of him.

In a Facebook post, the Russian contemporary art collector Marat Guelman, now based in Montenegro, wrote that he now understood why “three days ago [Pavlensky] sent me all his exhibition files and said I should have copies ‘just in case’”. Olga Romanova, a civil rights activist, wrote on her Facebook page: “How sadly everything ends. And how quickly”. Responses to her post ranged from suggestions that Pavlensky is crazy, simply seeking publicity and that next time he should nail his scrotum to the Eiffel Tower. The artist Oleg Kulik—who became famous in the 1990s for his performance as a mad dog—said it is too early to write Pavlensky off.