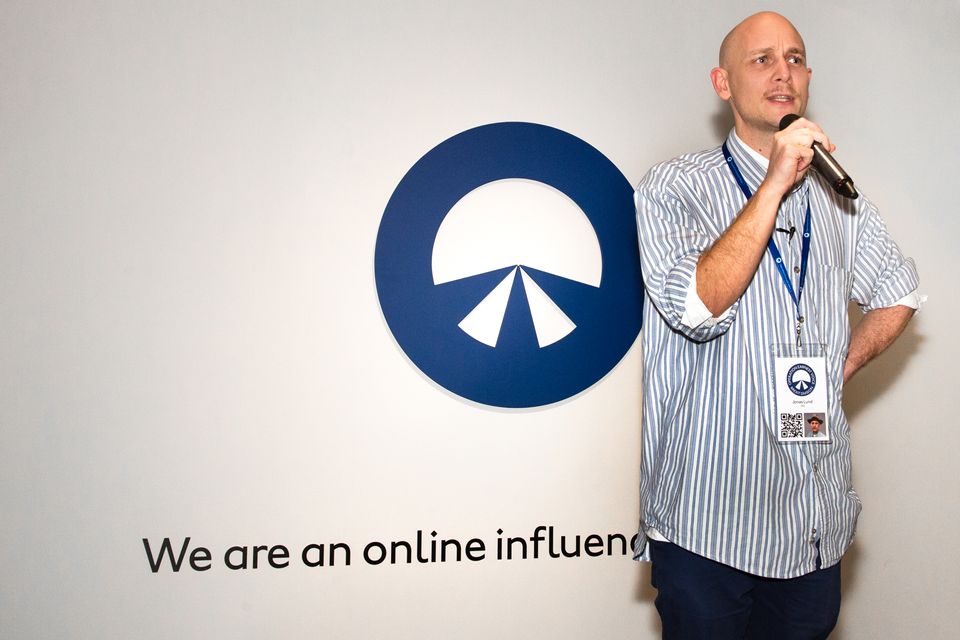 Jonas Lund speaking at the launch of Operation Earnest Voice at the Photographers' Gallery in London © Alan Mozes, 2019

The Swedish artist Jonas Lund’s project, a fully functioning office “tasked with reversing Brexit”, was hijacked by Leave Means Leave last week, as the pro-Brexit campaign group took to Twitter to try and shut down the performance.

Part-satire, part-serious proposition, Lund’s Operation Earnest Voice, which saw 12 paid “employees” including meme makers and social media managers run the open-plan office for four days at the Photographers’ Gallery in London, closed on Sunday. The project could not have been more timely, with the vote on Prime Minster Theresa May’s Brexit deal taking place today (15 January).

On 9 January, before the project had even begun, Leave Means Leave called for the gallery to be stripped of its charitable status and future funding from the Arts Council England be withheld, claiming the installation amounted to “blatant political campaigning”, as first reported in Arts Professional.

In a statement, the gallery said it had followed guidelines from the Charity Commission, consulted with Arts Council England, as well as taken legal advice “to ensure that the project complied with all appropriate regulations especially with regard to publicly funded, charitable institutions”. As a result, it “would not adjust or shut down the project”.

Describing Brexit as “one of the biggest political blunders” of our era, Lund–whose plans to move to London could be stymied by the referendum–said the aim of his project was “not to preach”. The goal, he said, was to produce content–via Facebook or fake news websites, for example–and test it. “I don’t have a message. For me, it would be enough if just one person became better informed about the tools used to manipulate us,” he said.

Lund believes regulation of Facebook and other social media sites needs to be improved. “Social media tools supposedly have no bias, but there are certain consequences if you surrender all personal information to Facebook,” he said. “The use of targeted ads and companies like Cambridge Analytica have manufactured consent.”

Although Brexit was a highly topical catalyst for the project, its wider aim “was to expose and explore online manipulation tactics used widely by propaganda offices”, according to the gallery.

Indeed, Barack Obama’s use of the internet in his 2008 US presidential campaign is considered a turning point in modern politics. Alan Mozes, a photographer on Obama’s 2012 campaign and Hillary Clinton’s 2016 bid—and an employee on Lund’s project—recalled how liberals praised Obama’s use of technology and social media at the time. “We have to be honest that this conversation goes both ways. Social media is not evil per se, it can be used for good and bad,” he said.

Katrina Sluis, the senior curator of digital programmes at the Photographer’s Gallery, points out that photography has a long history as a medium for influencing politics. “It’s entirely appropriate that the Photographers’ Gallery look at not only the content of public images, but also the way they mobilise through online platforms,” she said.