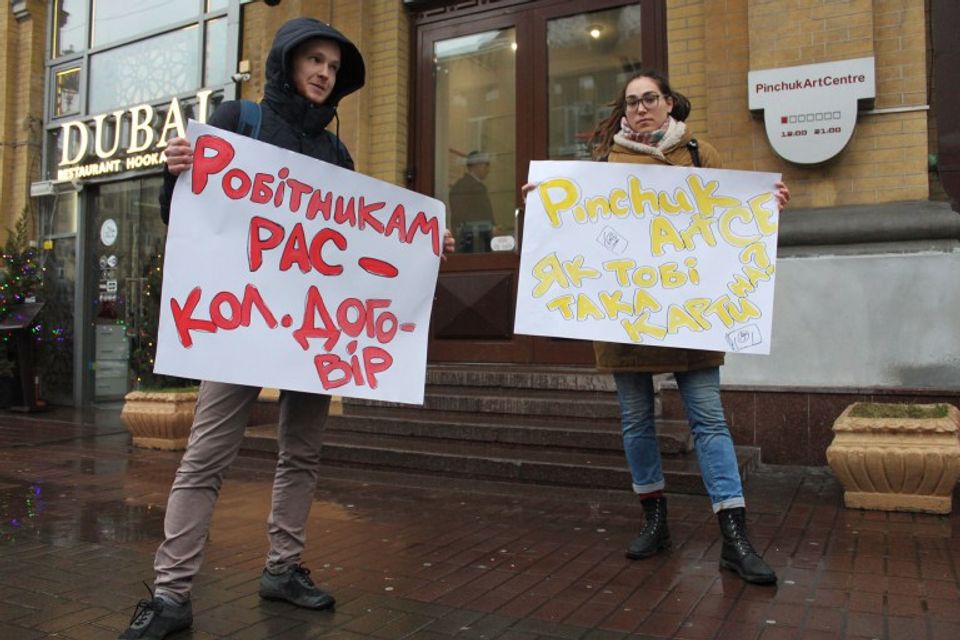 Union members protesting outside the PinchukArtCenter in December

A few months after attempting to form a trade union, 28 guides at the PinchukArtCenter have been dismissed by the Kyiv-based institution.

According to an open letter published this week by Anastasia Bondarenko, the head of the union representing the dismissed guides, the group was "fired without any explanations or notifications after a series of threats. We believe that our union activity was the reason for our dismissal.” She says that the guides were not allowed to take sick leave but were instead required to work nine-hour shifts while ill or risked losing their jobs. Bondarenko says that guides were given “shoestring contracts” on a precarious basis, adding that in between exhibitions, the guides remained unemployed, often for several weeks or months on end.

The PinchukArtCentre, which denies the allegations, says its decision to not renew the guides’ contracts was borne from a desire to enhance visitor experience. In a statement published on its Facebook page, the gallery said: “Our exhibitions are complex. Especially difficult, for example, was Boris Mikhailov's exhibition, which turned out to be a real test for our team of guides. They [the guides] had a hard time explaining some provocative work. Our guides could not engage the audience in dialogue, and we, as an institution, saw the [drawbacks] of this model.”

The statement goes on to say that after an internal review in September 2019, it was decided that the guides would no longer be required. “Therefore,” the statement reads, “we decided to stop and review our approach. During this process, a union was formed. This happened at the end of October, two months before the expiration of contracts with the guides.”

The statement continues: "We need to re-determine what a guide should be. We understand they need to be more mature. We understand that they need to provide better preparation. We see that our audience seeks to interact with art in a different way. Therefore, we are working on developing new ways to interact […] Do we not have the right to think? Are we not entitled to innovation?"

Two of the 20 nominees of this year's PinchukArtPrize 2020, Valentina Petrova and Pavel Grazhdansky, published separate open letters after deciding to withdraw from the competition in solidarity with the dismissed guides. The artists said they wanted to see an amicable resolution between the two parties.

The PinkchukArtCenter is one of the most important galleries in the Ukraine. Located in Kyiv’s central Bessarabska Square, it was founded in 2006 by Viktor Pinchuk, a billionaire who built his fortune when his father-in-law, Leonid Kuchma, was president.

The case echoes the Marciano Art Foundation's spectacular shutdown earlier this year, which closed shortly after employees attempted to unionize, pointing to a troubling trend within private institutions.

The union representing the guides is asking management to restore their positions, with the added caveat that the future fate of the profession should be subject to open public dialogue between the gallery, the trade union, artists, the media, specialized specialists, and others. Also, they are seeking priority employment rights to laid-off workers. To avoid discrimination, the union is seeking to protect the rights of other PinchukArtCenter workers, as well as to immediately conclude collective agreements with all employees involved in the recent standoff.