Investigators recovered more than 2,000 objects, mostly coins, that they say were offered for sale through auction houses

Greek police have busted what they say is a criminal organisation that has been looting antiquities from ancient sites in the country for the past 10 years and smuggling them out to auction houses and private buyers in Germany, Austria, Switzerland and the UK. A spokesman for the Patras police department in western Greece, which led the 14-month investigation, said on Wednesday that more than 50 people were involved in the ring and 26 arrests have been made.

The two alleged ringleaders of the gang were arrested on Sunday at the Greek-Bulgarian border, and had almost 1,000 coins and small artefacts hidden in the bumper of their car. Police said they have recovered a cache of more than 2,000 objects, mostly coins, but including gold jewellery, bronze figurines, ancient glassware and some larger stone and marble statues. The antiquities were taken from sites across Greece and date from as early as the sixth century BC. Police also confiscated several metal detectors, a stash of guns and currency in euros, US dollars and Kuwaiti dinars, as well as counterfeit plates. 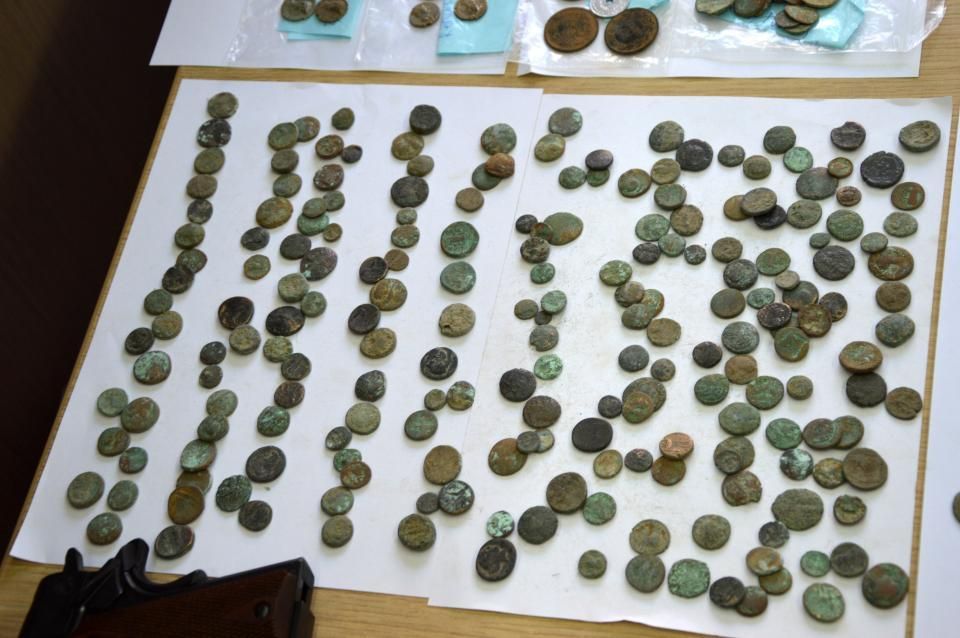 Police said they have recovered a cache of more than 2,000 objects, mostly coins, but including gold jewellery, bronze figurines, ancient glassware and some larger stone and marble statues

Police said the works were sold using fake provenance documents attributing them to private collections in Europe, but that the auction houses involved (which have not been named) knew the coins were illicit property and often helped inflate the final prices paid for them. Officials added that extensive paperwork will help them track down many of the objects that have already been sold. “For very many of the coins we have full documentation, starting from when they were discovered in the earth to the auction at which they were sold,” the police spokesman Haralambos Sfetsos told The Associated Press.