City authorities in Wiesbaden say it posed a threat to security 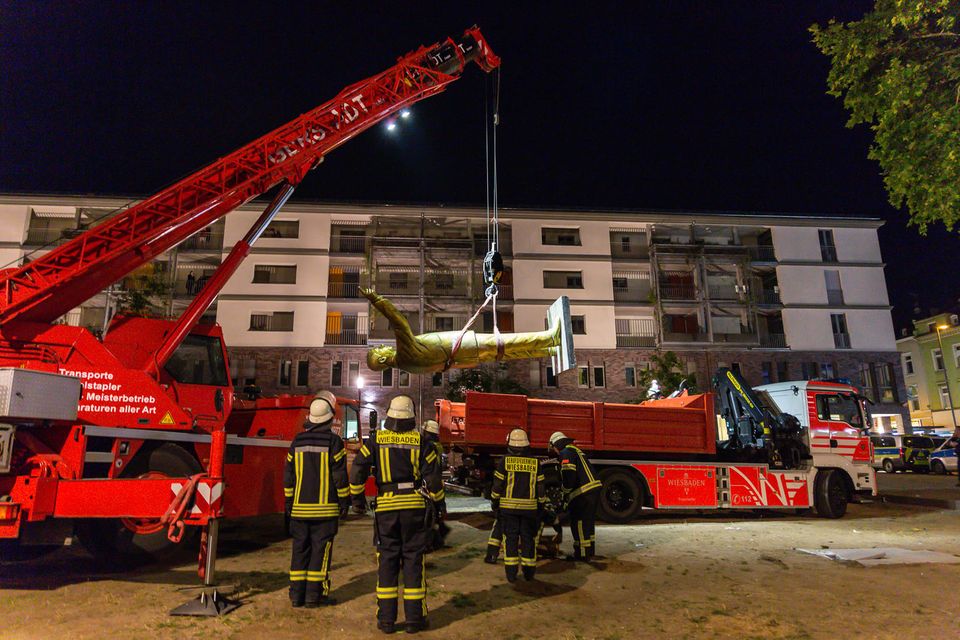 Firefighters remove the golden statue of Turkish President Recep Tayyip Erdogan on late 28 August in the western German town of Wiesbaden, where it had been placed as part of the Wiesbaden Biennale Sebastian Stenzel/AFP/Getty Images

Police have removed a gilded, larger-than-life statue of Turkish President Recep Tayyip Erdogan erected on a central square in the German city of Wiesbaden after municipal authorities said it posed a threat to security.

The four-metre-high sculpture was part of the Wiesbaden Biennial, which this year bears the motto “Bad News.” The police said fans and opponents of Erdogan had engaged in a verbal exchange near the statue last night and the mood was “mildly aggressive,” according to the Frankfurter Rundschau newspaper. City authorities described “heated discussions and skirmishes that required several police interventions.”

“Artistic freedom is a valuable principle that is worth defending,” a statement from the city said today. “But protecting an art installation day and night with a large police presence in order to guarantee security and order seemed disproportionate.”

Though some people posed for selfies with the statue before it was removed, it also attracted vandals, with one man captured on video spraying Erdogan’s suit. Others voiced anger on Twitter. “Erecting an Erdogan statue is not art, it is a slap in the face to all those who fled this dictator and came to Germany,” tweeted Ali Utlu of Cologne.

City authorities said yesterday they had given permission for the Biennial to mount a “sculpture of a person-like figure.” They said they were not previously aware the sculpture portrayed Erdogan. Yesterday they released a press statement, saying “the city council has recognised that artistic freedom is anchored in the constitution and sees no legal basis nor need for action as long as the art installation presents no danger for public safety and order.”

The Wiesbaden Biennial opened on 23 August and runs through 2 September. Kathrin Luz, a spokeswoman for the festival, said she could not reveal the name of the artist who produced the sculpture. “It is part of the concept that it is anonymous,” she says. “The intention was that it should suddenly be there and we would see how people would respond to it.”

“The question of authorship is not central for us,” says Martin Hammer, the curator of the Wiesbaden Biennial. “What is important is what happened on the square in the last 24 hours. Through these discussions and debates, (the statue) took on an important public function.”

Luz said the Biennial, which aims to cross borders between theatre and art, is seeking to defend artistic freedom. "We were pleasantly surprised by the positive statement from the city recognising artistic freedom yesterday,” she says.

UPDATE: This story was updated to include the latest comments from Wiesbaden city authorities.