Plaster casts were made of the newly discovered victims of Vesuvius eruption, which are believed to have been a wealthy landowner and his slave 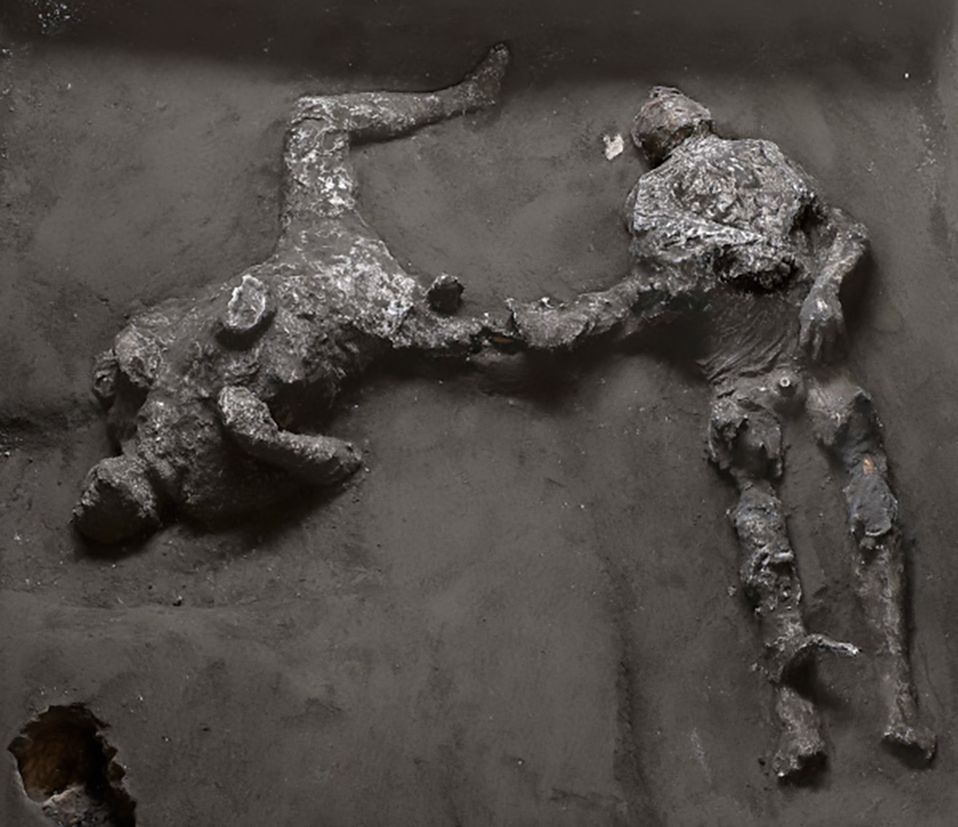 The men—who were were discovered during excavations at the Civita Giuliana, a suburban villa northwest of Pompeii—were identified as a wealthy landowner and his slave Courtesy of the Archaeological Park of Pompeii. Photo: Luigi Spina

Archaeologists at the Roman city of Pompeii have turned to a centuries-old technique to conserve the bodies of two men recently unearthed at the ancient site, which was engulfed by volcanic ash in 79AD spewing from Mount Vesuvius. The men, identified as a wealthy landowner and his slave, were discovered during excavations at the Civita Giuliana, a suburban villa northwest of Pompeii.

“Once the bones had been analysed, plaster was poured in according to the famous plaster casting technique developed by Giuseppe Fiorelli, who first invented and experimented with it in 1867,” say Pompeii officials in a statement. The technique involves pouring liquid plaster into the cavities left by the bodies, creating casts of the impression in the ash. Laser scans were also made of the body cavities as part of the casting process.

Other holes at the excavation site were also filled with plaster which “[when] poured in, revealed the presence not of victims but of objects which had perhaps been lost during the escape. Manual exploration of these voids, and the shape revealed by the plaster casts, revealed that these were heaps of cloth, with large and heavy folds,” say the officials.

The skeletal remains of the men lay in a passageway below the villa which led to the upper floor. Both escaped the initial eruption on 24 October 79AD, only to be killed by a blast on 25 October.  “The flow that struck was however very fast and very violent, bringing down the first floors of the houses and surprising the victims as they attempted to escape across a few centimetres of ash, leading to their deaths. In this case it is probable that the pyroclastic flow flooded the room through several openings, entombing them in the ash,” says the Pompeii statement.

The younger man is thought to be aged between 18 and 23. “The presence of a series of vertebral compressions, unusual in a young man of his age, would suggest that he had carried out hard manual work. He could therefore have been a slave,” say the officials, adding that the imprint of his drapery is clearly visible on the lower part of his belly. The older victim is believed to have been between 30 and 40. “This victim wore more intricate clothing compared to the other… a tunic and mantle,” they add.

Massimo Osanna, the outgoing director of the Archaeological Park of Pompeii, said in a video issued by the Italian Culture Ministry that the find was “a touching discovery of great emotional impact.” The dig at Civita Giuliana is continuing while the park remains closed in light of the coronavirus pandemic; prosecutors in the nearby Torre Annunziata region charged a group of people with robbing tombs at the site in 2017.