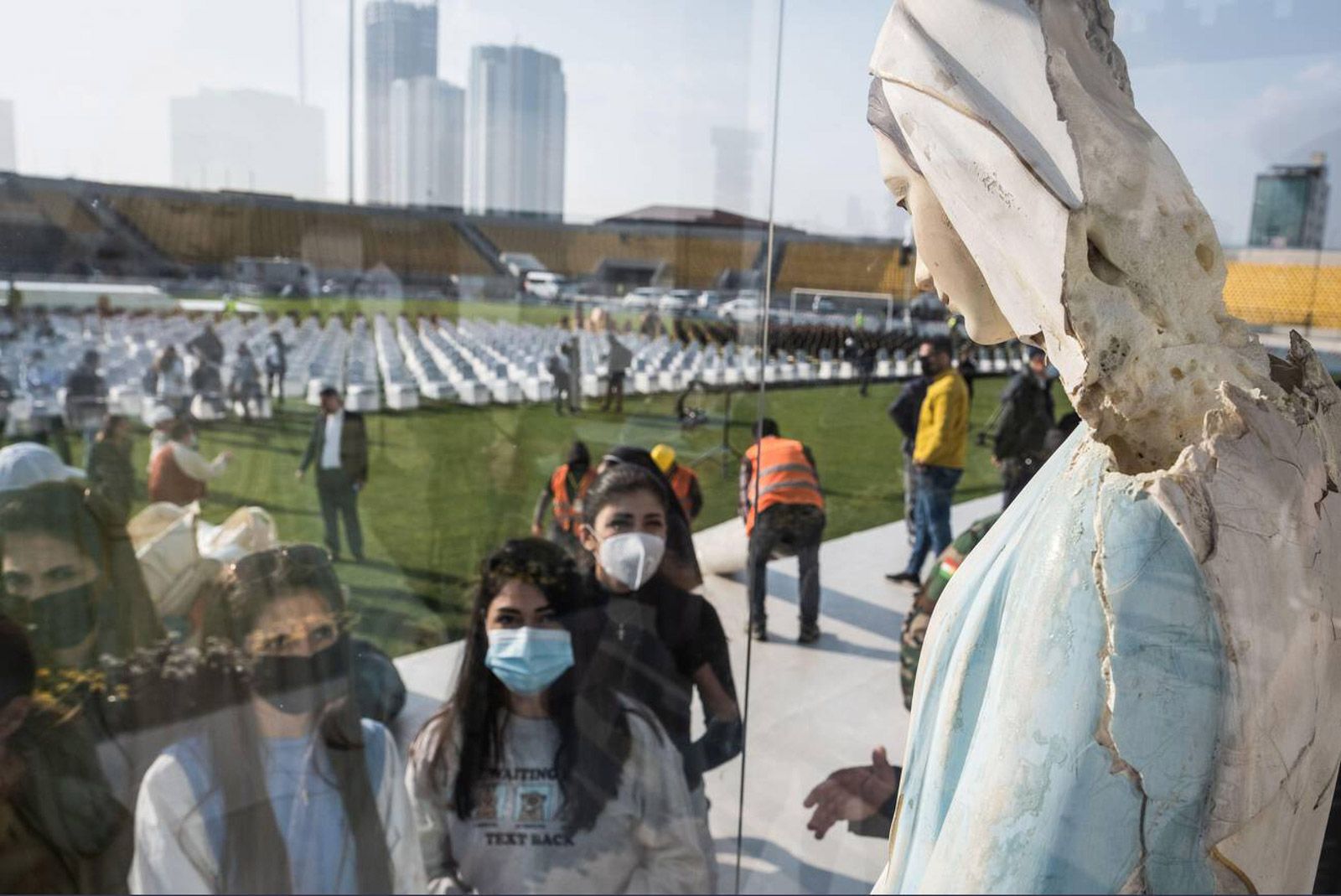 Artists played a prominent role in Pope Francis’s historic visit to Iraq last month, presenting the pontiff with multiple works—including plaster sculptures, restored statues and crosses made from burned wood—as testaments to the trauma citizens endured under Islamic State (Isis), and expressions of their hopes for a future of religious tolerance.

The Vatican framed the first visit by a Pope to Iraq as a chance to repair damaged interfaith relations. In 2014 Isis swept through the northern Nineveh Plains—the heartland of Iraq’s Christian communities—razing more than 350 churches, destroying art and persecuting Iraqi Christians, whose numbers have dwindled from 1.5 million before the US-led invasion in 2003 to less than a third of that today. Iraqi and US-led coalition forces ousted Isis in 2017.

Highlights of the Pope’s whirlwind tour from 5 to 8 March included a mass in a football stadium in Erbil, a prayer among Mosul’s ruins, and a meeting with the Shiite leader Grand Ayatollah Ali Al Sistani. During the Erbil mass on 7 March, the Pope blessed a statue of the Madonna which was displayed in a glass case; in Mosul later that day, he kissed crosses made from wood salvaged from burned churches, and was presented with a bas-relief medallion depicting local monuments demolished by Isis. 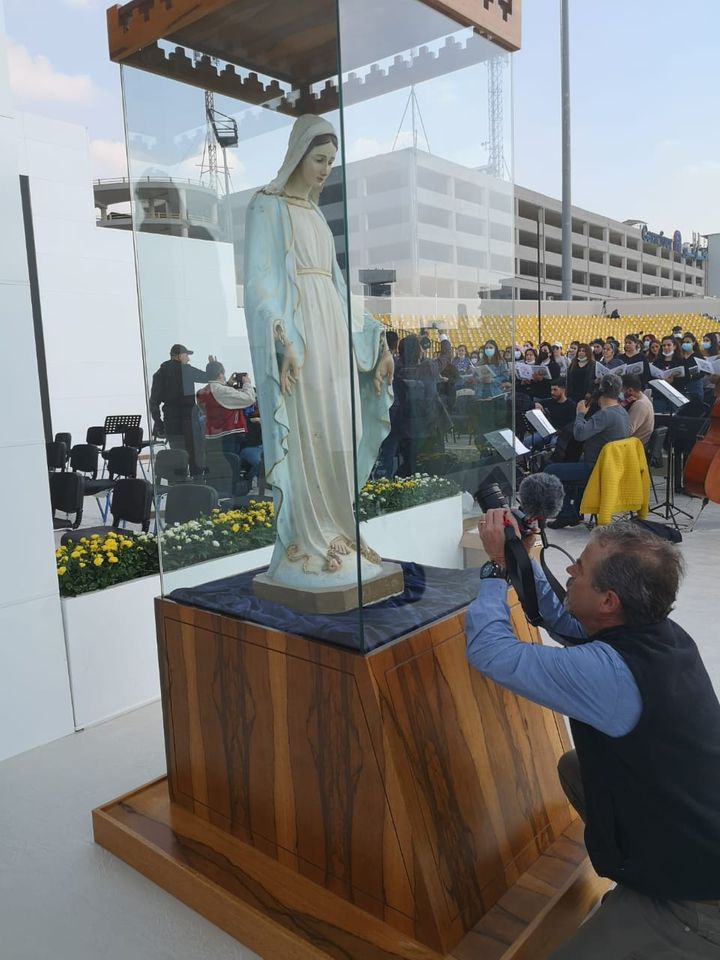 The Madonna originates from the Church of St Adday in the village of Karamles, which Isis desecrated in 2014, destroying an 18th-century marble altar, smashing the bell tower and sawing off the Madonna’s hands and head before burning the building. Christians quickly deserted the village when Isis arrived, and number just 345 today compared with 820 before the rise of the fundamentalist group, says Fr Paolo Thabit Mekko, the head of the local Christian community.

Weeks before the Pope’s arrival, Malik Kadifa, an Orthodox architect who lives in Erbil, was requested by the archbishop of the city to restore the statue from Karamles. Together with his multi-faith team, which includes Muslims, Kadifa reassembled the fibreglass structure with steel rods and foam, leaving signs of damage intact. “We did not repair the cracks or reattach the hands, to show the hatefulness of those years,” Kadifa says.

The Madonna—which was first delivered to Iraq by Italian missionaries in the 1970s—will soon return to the Karamles where it will be a symbol of resilience, Fr Paolo says. “When I first saw the Madonna smashed to pieces on the floor after the fall of Isis I was so sad. But restoring it shows that we are now ready to heal the wounds,” he says. 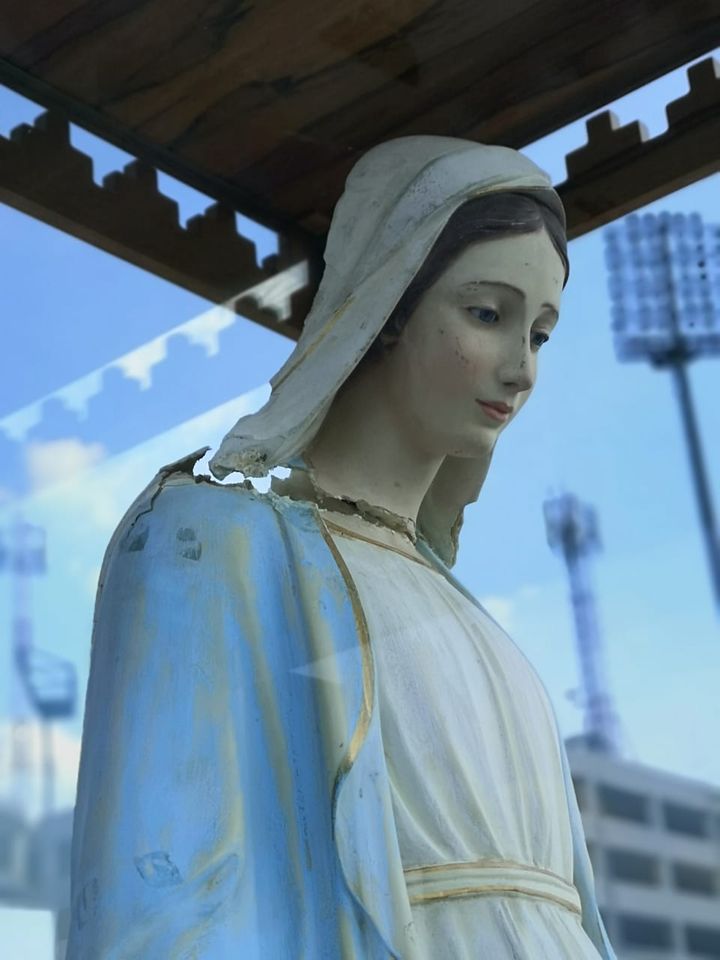 During the Mosul ceremony, the sculptor Omar Qais personally presented the Pope with a medallion displaying the city's demolished monuments—including the iconic al-Hadba' minaret and clock tower of the Al-Sa’a Dominican Church—set in a golden cross capped with a white dove and supported by two hands cradling the city. In return, the sculptor received a bronze medal engraved with the image of the Prophet Abraham and a map of Iraq.

Qais, a Muslim, was asked by the Archbishop of Mosul to create the work just one week before the Pope's visit, and “worked day and night” to complete the structure, the sculptor says. He made the cross in separate sections, and pieced them together on an iron armature. 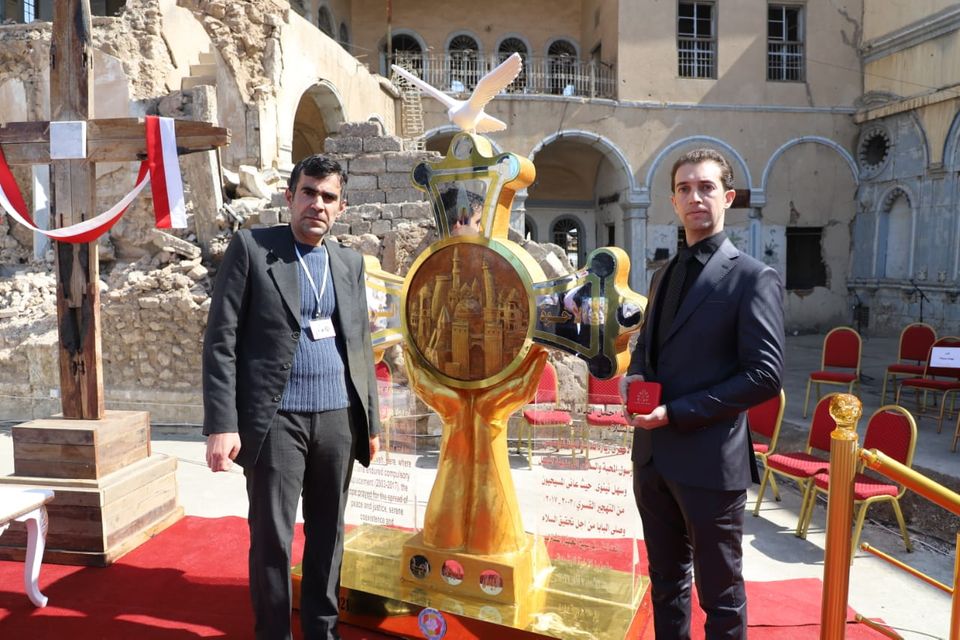 Yet Qais designed the central medallion at an earlier time during the rule of Isis. As the jihadists punished the creation of figurative art with death, Qais secretly worked in his basement studio for 33 months, making numerous clay studies, including for the medallion, which he ordered his family to smash if militants entered their house.

The finished sculpture is symbolically powerful because it was "created by a non-Christian for a Christian", Qais says. The Orthodox Kadifa expresses a similar sentiment. “When I see this Catholic symbol destroyed, I cry. If they attack one of us they attack us all. That’s why we should stand together.”