Tens of thousands expected at the weekend festival celebrating the newest addition on the National Mall, including performances by the Roots and Public Enemy, dance, spoken word and a southern BBQ

Thousands of people are expected to line Constitution Avenue to celebrate the opening of the National Museum of African American History and Culture (NMAAHC) tomorrow, 24 September, in Washington, DC. Free tickets to the museum’s opening weekend—all 28,500 of them—sold out in less than an hour. President Obama is due to inaugurate the museum by ringing a bell on loan from the First Baptist Church in Virginia, which was founded by slaves and free black people in 1776.

NMAAHC is the first new museum built by the Smithsonian Institution in a more than a decade and the first museum dedicated to African-American history on the National Mall. The bell-ringing is just one part of a three-day festival to celebrate the grand opening, which includes music by the Roots and Public Enemy, dance and spoken word performances and southern BBQ.

This citywide party could not have been more difficult to imagine when Lonnie Bunch, the director of NMAAHC, arrived for his first day on the job in 2005. At the time, the institution had no site, no building and no collection. What a difference 11 years makes. The $540m David Adjaye-designed museum, next door to the Washington Monument, now houses a collection of more than 34,000 objects that tell the story of African-American people from the beginnings of the slave trade in the 15th century to the present.

As its cumbersome name might suggest, NMAAHC is in fact two institutions rolled into one: a history museum and a culture museum. Downstairs, a sweeping spiral staircase guides visitors through the darkest chapters of US history. (To adhere to strict height regulations for buildings on the National Mall, around 60% of the 400,000 sq. ft museum is underground.) Upstairs, culture galleries trace the influence of African-Americans on all aspects of US life, from sport to the arts. 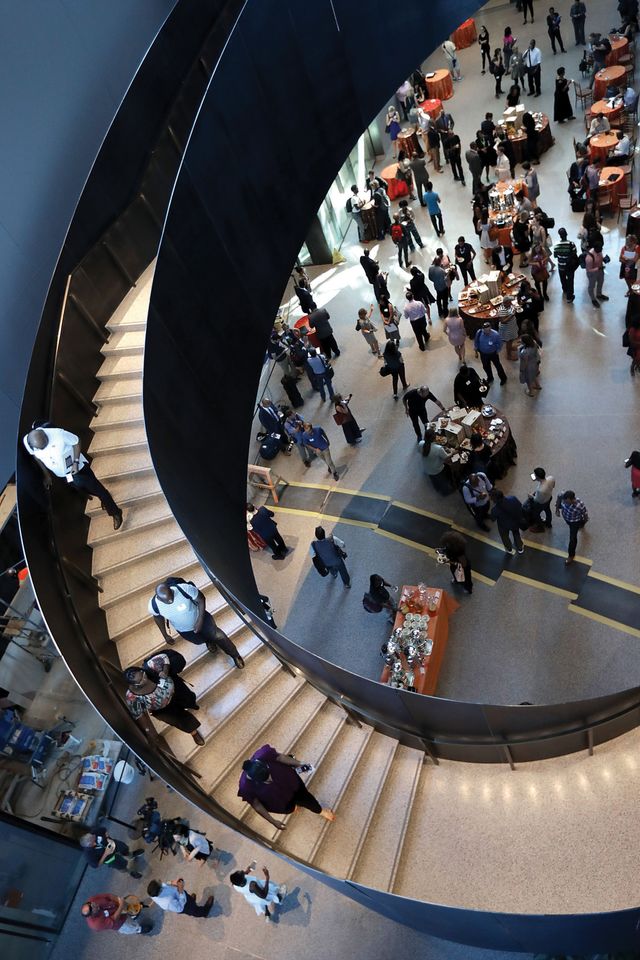 The spiral staircase leading to the history galleries WASHINGTON, DC - SEPTEMBER 14: A spiral staircase moves visitors from the main floor to the lower levels of the Smithsonian's National Museum of African American History and Culture during the press preview on the National Mall September 14, 2016 in Washington, DC. Filled with exhibits and artifacts telling the story of the first Africans in the United States and their descendents, the 400,000-square-foot museum will open to the public on September 24. (Photo by Chip Somodevilla/Getty Images)

“We wanted African-American history to be the quintessential example of American history—the lens through which people understand what it means to be American,” says Rex Ellis, the museum’s associate director for curatorial affairs. Curators also had to strike a delicate balance between accurately representing the horrors of slavery, segregation and racism, and providing moments of celebration and uplift.

When visitors enter the building, they are encouraged to take a glass lift underground and back in time. The first room evokes the confinement of the Middle Passage, which transported millions of slaves from Africa to the New World. The low-ceilinged gallery contains artefacts, including remnants of shackles and iron ballast, that were salvaged from the wreck of a Portuguese slave ship recovered off the South African coast in 2008.

The history galleries house many of the museum’s most visceral and monumental objects. One room contains the coffin of Emmett Till, the 14-year-old whose murder in 1955 helped galvanise the Civil Rights movement. (Till’s family donated the casket to the Smithsonian after his body was exhumed in 2005 as part of an investigation into his death.)

Inside a slave cabin “We wanted objects that had a narrative imperative—that would allow us to tell a story in an immediate way,” Kinshasha Conwill, the museum’s deputy director, says. Visitors can peer into a painstakingly reassembled slave cabin from South Carolina to see the harsh conditions in which families lived for generations. They can walk through a segregation-era train car to observe the radically different accommodation for black and white passengers, who paid the same price for a ticket. 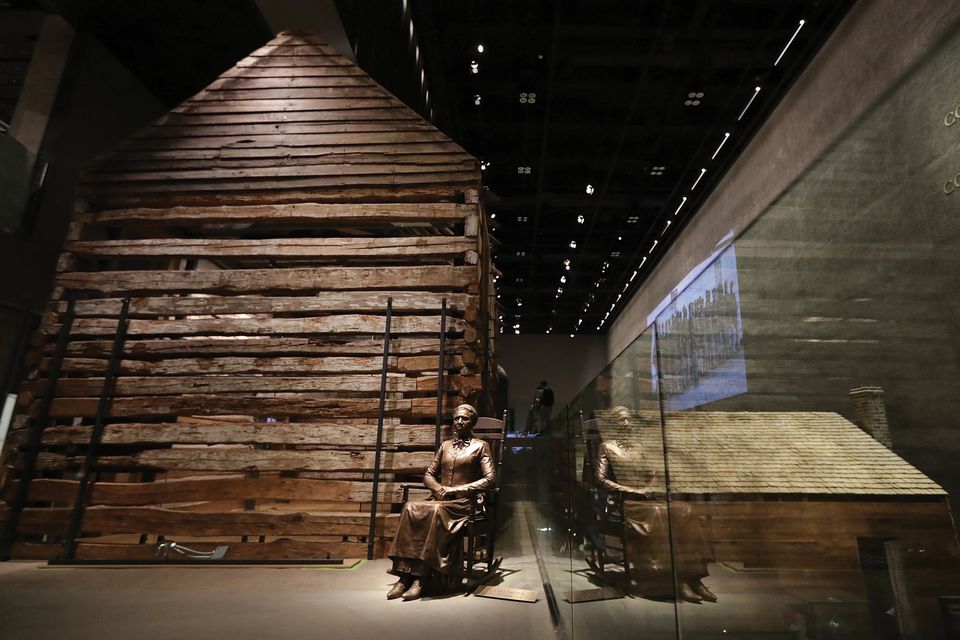 A statue of Clara Brown (1800-85), a pioneer born a slave, is displayed next to a preserved slave cabin WASHINGTON, DC - SEPTEMBER 14: A statue of Colorado pioneer and former slave Clara Brown is on display next to a preserved slave cabin at the Smithsonian's National Museum of African American History and Culture during the press preview on the National Mall September 14, 2016 in Washington, DC. Filled with exhibits and artifacts telling the story of the first Africans in the United States and their descendents, the 400,000-square-foot museum will open to the public on September 24. (Photo by Chip Somodevilla/Getty Images)

Upstairs, galleries dedicated to music and theatre offer a hit parade of high-profile artefacts, from Louis Armstrong’s trumpet to Chuck Berry’s cherry-red Cadillac. By comparison, the visual arts gallery is a quieter affair. It is free of architectural interventions and celebrity belongings. But it does contain some of the most difficult, important work in the entire museum.

Like the history galleries, the art gallery seeks to tell a universal story while acknowledging the unique concerns and challenges facing African-American artists. “We’re emphasising that this is an American art gallery—we really don’t discuss race unless it is germane to the artwork or important to the artist,” the curator Tuliza Fleming says.

Donors were responsive to this approach. “We don’t call him ‘black artist Sam Gilliam’, or see his work and automatically see a slave quilt,” Fleming says, referring to the DC-based abstract painter. “Potential donors were very excited about that concept.” A wall of works by Gilliam, Nelson Stevens, Amy Sherald and Barkley Hendricks illustrates the diverse approaches of artists working in the 1970s.

But art is not made in a vacuum, and the display also traces how the historical events chronicled downstairs shaped the way artists saw the world. Gilliam’s April 4 (1972), a painting with yellow splatters and slashes of red, takes its title from the date of Martin Luther King’s assassination. David Driskell, meanwhile, was compelled to paint Behold Thy Son (1956)—which Fleming describes as “a modern-day pietà”—after the death of Emmett Till.

“Art is a part of history,” Fleming says. It also enables the museum’s visitors to better understand the events of the past, and their impact on the American psyche. The history galleries may feel like a punch in the gut, but the museum’s art collection is a slow burn. It is likely to linger in visitors’ minds long after they leave.

It started with a phone call: how artefacts found their way into the collection  Some of the museum’s most treasured objects arrived unsolicited. Rex Ellis, NMAAHC’s associate director for curatorial affairs, says: “As individuals found out about what we were doing, we fielded and followed up on calls. We depended a great deal on regular citizens who had Grandma’s old hats or tools or Bibles.” Here are three prized objects in the collection that found curators, rather than the other way round. 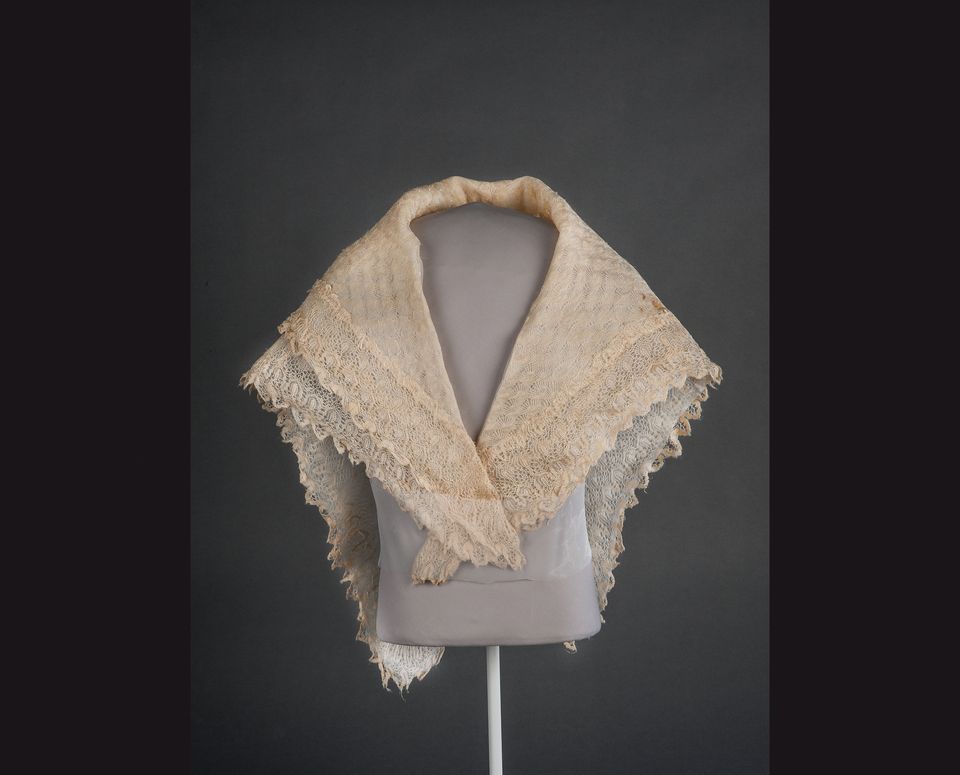 The Civil War spy and Underground Railroad operator received this silk shawl as a gift from Queen Victoria around 1897. It is one of several artefacts donated by the historian Charles Blockson. His ancestor, Jacob Blockson, escaped slavery in Maryland with Tubman’s help before the Civil War.

Timeline: a long time coming 1915 African-American veterans form a committee to propose the creation of a memorial in Washington, DC, dedicated to African-American achievement in the arts and sciences.

1929 President Herbert Hoover appoints a commission tasked with creating the memorial, but fails to gain support from Congress and private funders.

Late 1970s In the wake of the Civil Rights movement, proposals for a national museum begin to circulate again in Congress, supported in part by Lonnie Bunch, the current director of NMAAHC, who was then a staff member at the Smithsonian’s National Air and Space Museum.

1988 Representatives Mickey Leland and John Lewis introduce to Congress separate bills for a standalone African-American history museum within the Smithsonian. Both are scrapped due to high costs.

1995 The Smithsonian suggests incorporating a centre for African-American history into its existing buildings. The institution’s secretary, Ira Michael Heyman, questions the need for an “ethnic” museum on the National Mall.

2002 Early donors come on board, including General Electric and the insurance company Aflac ($1m each), and retailer Walmart ($5m).

2003 Congress assigns the museum $17m for planning and site selection, and $15m for educational programmes. The government will eventually provide half the $540m budget. The rest comes from private donors.

2005 President Bush approves a site adjacent to the Washington Monument, the last vacant parcel of land on the National Mall.

2013 The museum names its 350-seat theatre after the billionaire TV host Oprah Winfrey, who has donated more than $20m to the project. 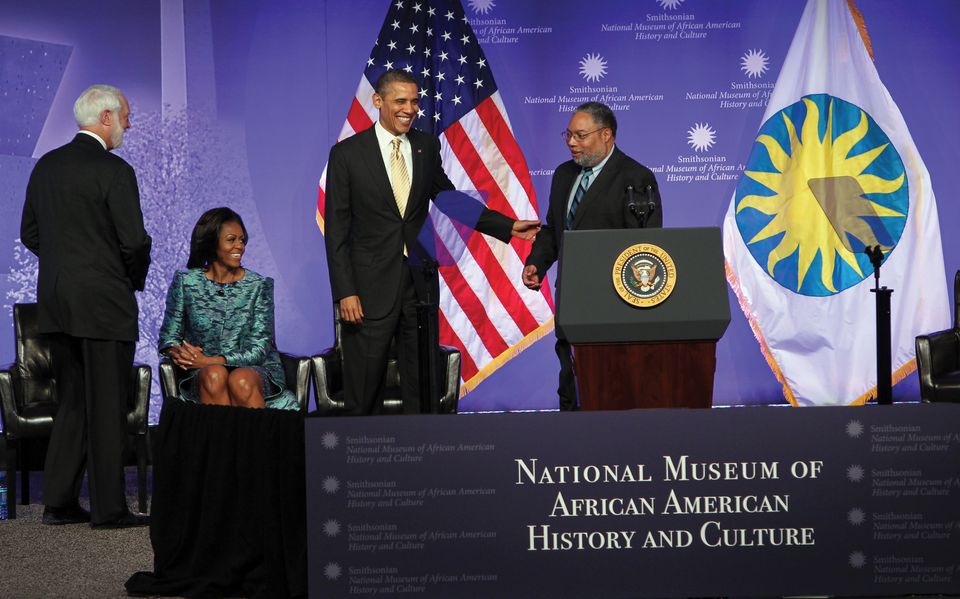 A version of this story appeared in our October print edition as part of a special report on Washington, DC.