As the museum opens an ambitious $450m expansion, activists are demanding that “vulture fund” investor Steven Tananbaum be taken off the board—but he is not the only trustee with financial interests in the island 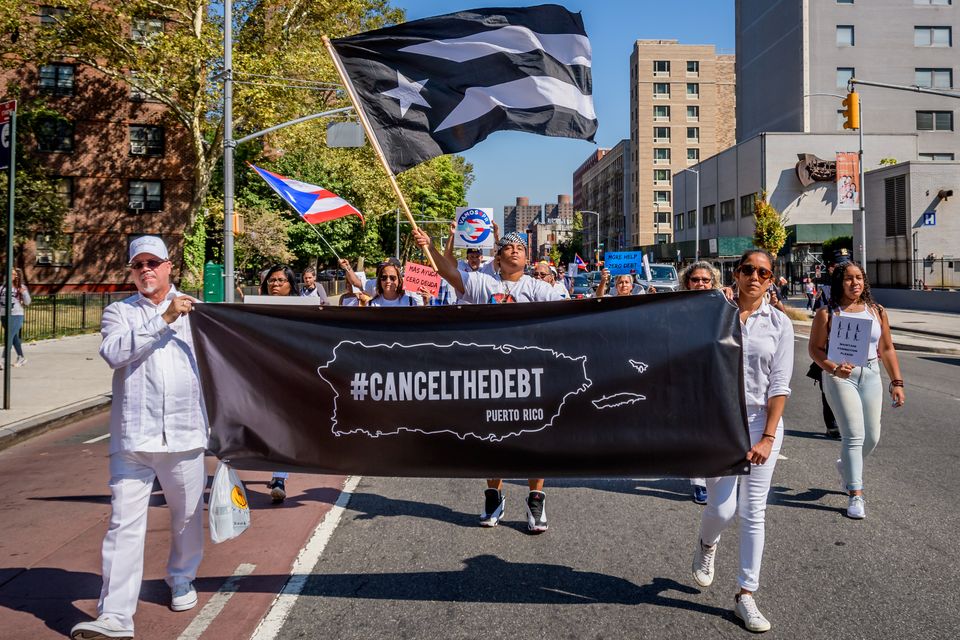 The newly expanded Museum of Modern Art in New York has yet to officially reopen to the public—and already finds itself under siege. Dozens of protesters plan to crash its opening preview party on Friday 18 October, calling upon the museum to divest itself from private prisons by severing its ties with Bank of America and the investment management firm BlackRock, whose CEO Laurence Fink sits on the museum’s board. Fidelity Investments, which manages MoMA’s pension fund, is also a large owner of private prison stocks.

And now, a coalition of grassroots organisations representing the Puerto Rican community is calling for the removal of MoMA’s trustee Steven Tananbaum, who founded GoldenTree Asset Management, a hedge fund that owns at least $2.5bn of Puerto Rico’s debt and has profited from the island’s financial crisis.

“The demand is to take action and remove Tananbaum. As long as he is on [MoMA’s] board, we will be at their door,” says Gina De Jesus, an organiser with New York Communities for Change who is organising a protest at the museum during the public opening on Monday 21 October. De Jesus expects several politicians to attend the march, including the former New York City Council speaker Melissa Mark-Viverito and the city’s current Public Advocate Jumaane Williams.“People died after Hurricane Maria and [Tananbaum] didn’t think twice about profiting from the disaster. If MoMA cares about the wellbeing of other humans more than money, it must take action.”

When Hurricane Maria ripped through Puerto Rico with devastating force on 20 September 2017, the Commonwealth’s bond prices were already plummeting. Investment firms known as “vulture funds”, which specialise in high-risk "troubled assets" that are near default, and therefore at a discount, took notice and went on a buying spree, quadrupling their collective holdings from $254m to $1.1bn. One of the most aggressive companies involved in the rush was GoldenTree Asset Management, which in 2019 ranks in the top three holders of the island’s debt, with more than $2.5bn total in sales tax revenue bonds issued by the Puerto Rico Sales Tax Financing Corporation (COFINA). GoldenTree has accumulated hundreds of millions of dollars in paper profits while the island’s recovery efforts have stalled under austerity measures that are designed to deliver investment returns to bondholders, like the hedge fund.

Tananbaum helped found GoldenTree, which manages more than $25bn according to its website. He serves as the company’s managing partner and chief investment officer. Just days before Hurricane Maria hit Puerto Rico, he attended a Milken Institute conference in Singapore where he challenged investors to pursue risk bonds in danger of defaulting because of their relative cheapness. Through his firm, Tananbaum has also brought together a group of COFINA bondholders, which includes other hedge funds, that have been advocating for Congress to raise interest payments on Puerto Rico’s debt as the island’s pension system and government services continue to teeter on the brink of collapse.

Over the last four years, federal disclosures show that the group has spent $1.43m on lobbyists targeting bills like the Puerto Rico Oversight, Management, and Economic Stability Act (PROMESA), which was supposed to steer the island’s economy back into the black after Congress phased out a corporate tax credit programme that buoyed the island’s business developments from 1996 to 2006.

GoldenTree’s actions have made it a target of politicians and interest groups, who consider the debt restructuring unconstitutional and potentially illegal. Tananbaum, in particular, has become the subject of public scrutiny because of his position on the Museum of Modern Art’s trustee board. Critics say his leadership at the vulture fund puts him at odds with the institution’s ethical responsibilities, and its affiliate MoMA PS1’s past efforts to help Hurricane Maria victims.

“Steven Tananbaum is using cultural institutions to create an image of himself as a philanthropist who cares about society,” says Abner Dennis, a Puerto Rican research analyst with the Public Accountability Initiative, a nonprofit watchdog group focused on corporations and governance. “I think that’s dangerous because it normalises the violent and unethical ideals of a businessman who profits from the suffering of others.”

According to Dennis, GoldenTree has become known on the island for its attempts to sway Puerto Rican legislation and bankruptcy proceedings in its favour. When the hedge fund faced resistance on a plan to reduce the Puerto Rico Electric Power Authority's (PREPA) debt by 32.5% over the next four decades, which would eventually result in higher utility fees for customers, investors simply bought another company to bolster their position. On 5 September, GoldenTree acquired Syncore Holdings Ltd for $429m in cash. Four days later, Syncora announced that it had agreed to join the PREPA Restructuring Support Agreement.

“When Hurricane Maria devastated Puerto Rico, many of us looked for ways to help,” Jimmy Van Bramer, the ambitious New York City Council representative from Queens who also chairs the legislative body’s Cultural Affairs, Libraries and International Intergroup Relations Committee, says in a statement. Two weeks after Hurricane Maria ripped through Puerto Rico with devastating force on 20 September 2017, MoMA PS1 held a fundraiser. The Center For Popular Democracy organised the event alongside Klaus Biesenbach, the museum's then-director, and Van Bramer. Attendees donating a minimum $20 at the door would have spotted actors James Franco and Rosie Perez inside the charity event, as well as other notable celebrities and politicians. The evening was considered a great success, raising $36,000 for storm victims.

In addition to sitting on MoMA’s board, Tananbaum also endowed a curatorship named after himself and his wife, Lisa, in the museum’s Department of Painting and Sculpture. In March, Ugochukwu-Smooth C. Nzewi, a scholar of African art, was named to the position. Tananbaum is also a member of the Council on Foreign Relations, a foreign policy think tank that has denounced the tactics of COFINA bondholders like GoldenTree in blog posts. “Even after the restructuring, payments on the COFINA bonds would put Puerto Rico's debt burden [judged relative to its revenue] above that of an average state,” wrote Brad Setser, a senior fellow at the non-profit.

Spokespersons for Tananbaum, GoldenTree, MoMA, and MoMA PS1 all declined to comment.

Biesenbach, who is now the director of the Museum of Contemporary Art in Los Angeles, did not respond to requests for comment.

And Tananbaum is not the only MoMA trustee member with connections to vulture funds holding Puerto Rican debt. Daniel Och founded Och-Ziff Capital Management Group in 1998. Until recently, he served as the CEO of the largest publicly traded US hedge fund before becoming its chairman, a position he left in March 2019. While under his direction, the firm purchased more than $100m worth of Puerto Rican bonds during a $3.5bn sale in 2014. As of June 2019, the company held $393m in general obligation bonds, which are typically backed by a taxing authority. Och-Ziff Capital Management Group, now called Sculptor Capital Management, declined to comment.

Lobbying to make a profit

Vulture funds have held major sway in deciding the scale and speed of Puerto Rico’s recovery from bankruptcy and the devastation of Hurricane Maria. The Commonwealth’s economy entered a debt crisis in 2006 after a decade-long phaseout of special tax rates that were offered to US companies to build factories on the island expired.

That same year, COFINA was created to issue government bonds paid for using around half the state government’s revenue generated through sales tax. Debt rose exponentially, and in 2014 Puerto Rican bonds were downgraded to “junk status” by three credit rating agencies—drawing the attention of vulture funds. After the creation of an oversight board in 2016, the Puerto Rico filed for bankruptcy with over $70bn in debt by May 2017, just four months before Hurricane Maria made landfall. While most of the island was offline during the storm, the assault on Puerto Rico’s finances continued. COFINA bondholders digitally submitted numerous motions to bankruptcy courts asking that the government readjust its debts.

They were successful. Despite more than $90bn in estimated damages and over 3,000 people killed by the natural disaster, bondholders have continued to fight over who deserves the island’s sales tax revenues. Meanwhile, Puerto Rican officials have tried to legally challenge austerity measures, and in 2018, members of Congress penned a letter saying that the federal government “never intended PROMESA to be used to grant Puerto Rico’s creditors a priority, yet fiscal plans would appear to do so, which is a clear contravention of Congressional intent.”