The liberal intelligentsia say the culture sphere is under attack, while officials argue that it is flourishing 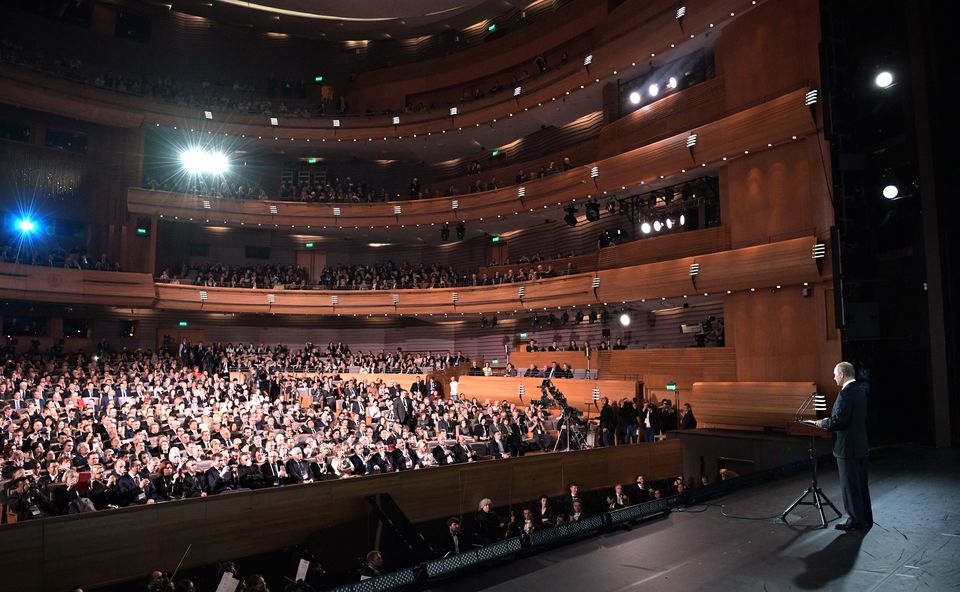 The Russian government’s annual St Petersburg International Cultural Forum (16-18 November) set off a new round of debate about the state of artistic freedom in Russia, with officials saying it is flourishing and a model for the world and the liberal intelligentsia saying it is under attack.

The arrest in August of the progressive theater director Kirill Serebrennikov on charges of fraud and misuse of government funds has made many in the cultural sphere feel especially vulnerable. In the leadup to the forum, some on the arts scene called for an outright boycott of the event, saying it is window dressing for a repressive regime, while others said it is morally defensible to attend only for the purpose of speaking out in defense of the artistic freedom.

Marina Davydova, a theater critic and art director of the New European Theatre festival, wrote on Facebook that the forum only served as an occasion to express a vote of no confidence in the culture ministry. “It is responsible for the atmosphere of fear that reigns in culture in general right now, but especially, of course, in theater. And it doesn’t particularly hide this,” Davydova wrote. “Rumors that dossiers are being compiled on all of us have been circulating for a long time. But now we have been given the opportunity to familiarise ourselves with the creative work of the custodians of public morals.”

The forum opened on Friday with a speech by President Vladimir Putin at the Mariinsky Theater in which he described “culture, art and education” as a “response to the challenges of barbarity, intolerance and aggressive radicalism”. He also met with the directors of cultural schools and institutions that work with youth, including Valery Gergiev of the Mariinsky Theater, the pianist Denis Matsuev, and Semyon Mikhailovsky, the rector of the St Petersburg Academy of Arts.

Mikhailovsky, who is also the commissioner of the Russian Pavilion at the Venice Biennale, told Putin that his academy has hundreds of Chinese students and a handful from the US studying ecclesiastical arts. “So you’re teaching them the right things?” Putin asked, expressing much more interest in the American students and urging Mikhailovsky to “teach them good and proper”.

But even cultural figures loyal to Putin express concern about the cultural atmosphere in Russia. Mikhail Piotrovsky, the director of the State Hermitage Museum, which hosted many of the forum’s main events, told the BBC Russian Service last week that “one should not show a theater director in a cage”. Serebrennikov is kept in a cage during court hearings, as is anyone accused in a criminal trial in Russia.

Piotrovsky told The Art Newspaper that there is a “also a very bad tendency in the overall attitude to culture” in Russia right now of exaggerating any alleged wrongdoings in the cultural sphere. He also defended a Hermitage deputy director in charge of construction who is under arrest on corruption charges, saying that he got things done effectively, which is virtually impossible on such projects in Russia. Putin had singled out the Serebrennikov and the Hermitage cases during a Kremlin meeting in October, saying their prosecution is a sign of a fair justice system.

Piotrovsky added that elements of an exhibition at the Hermitage’s Winter Palace devoted to the end of the Romanovs’ rule and the Bolshevik takeover are relevant to today’s mood. “What was the ruin of Russia in 1917? Spymania, xenophobia and nationalism,” Piotrovsky said. “This is a line of psychosis, that all of Russia’s troubles come from an encroaching Germany. This is a serious stereotype that continues to exist and that’s why this is one of the most serious subjects connected to the revolution, this spymania, attributing everything to a foreign influence. That’s why it’s very important to show—maybe not exactly parallels—but such important paradigms of Russian history.” Putin did not publicly visit the exhibition while in St Petersburg.

Speaking on Channel One state television on Sunday night, Culture Minister Vladimir Medinsky also said that Russia was “the key player on the world’s cultural map” in cultural education. He said that there were almost 2,000 foreigners from 96 countries among the forum’s 33,500 registered participants and that many of them had studied at Russian cultural institutions. “Maybe Yale and MIT teach something that we don’t, but in terms of musical, artistic and dance education, we are without a doubt the best in the world, and people come to study here, from China, from Asia, from Europe, from the US, in spite of all these mythical sanctions,” he said. “A person who has studied in our school [...] will never be an enemy of Russia.”

Medinsky also defended the ministry from attacks by liberals, mocking an opposition activist who attended the forum and spoke at one of of the forum sessions about artistic repression. He also denied the reports and images that circulated on social media of the culture ministry blacklist that includes the names of some of Russia’s top theater directors and accuses them of striving to create “radical art” in violation of the classical canon. Medinsky added that Russian state funding of theaters is unprecedented, with 100 in Moscow supported by the state versus five in Paris. At the same time, he said that recipients of state grants must not violate the governments cultural policy doctrine and works are examined by experts to make sure they follow the rules.