Queen Victoria and Fath-Ali Shah portraits, torn apart in 2011 British Embassy attack, to go back on show in Tehran

Restored paintings will form part of a new display of 66 works, including several Persian pieces bought by the UK's Government Art Collection after the attack 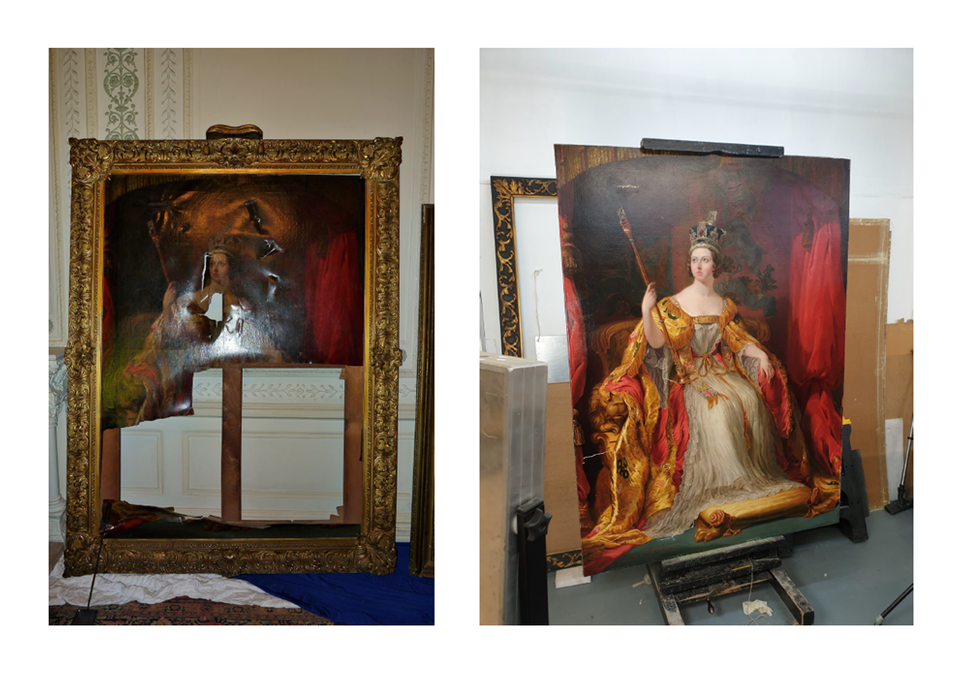 A portrait of Queen Victoria by Sir George Hayter after it was torn in the 2011 attack and, right, today following restoration © Government Art Collection

Two paintings torn apart by protestors who stormed the British embassy in Tehran in 2011, ransacking offices and diplomatic residences shouting “death to England”, are due to go back on show in Iran next month after extensive restoration.

A full-length portrait of Queen Victoria by Sir George Hayter (1863) and a 19th-century Qajar portrait of Fath’ Ali Shah were among six works owned by the Government Art Collection (GAC) that were on display in the embassy at the time of the attack. Both portraits were hung high up, so mainly suffered damage to the lower portions.

Two non-figurative works were unharmed, while a painting of George V after Samuel Luke Fildes, worth £2,000, was completely destroyed. A sixth work, a portrait of Edward VII, also after Fildes, was badly damaged and is being replaced by another copy in the new Tehran display.

Describing the attacks on the paintings as “iconoclastic”, the GAC curator Andrew Parratt says the British royals “suffered the most”, while the Persian paintings were relatively undamaged. There was “an element of consideration” from the protestors, he says.

After negotiations with the Iranian government, the paintings were returned to the UK for restoration in March this year. “Following treatment these works will now return to Iran where they have long associations with the country,” says a spokesman for the DCMS.

Worth £1.2m, the five foot square portrait of Fath’ Ali Shah, thought to have been a gift from the sitter to Sir Gore Ousley, the first British ambassador to Iran, and recently dated to 1813, was the most expensive work on show. The Queen Victoria portrait is an autograph copy of the artist’s state portrait of 1838, commissioned specifically for the British Embassy, and bearing an inscription by the artist in Farsi. It is valued at £20,000. Both paintings have been treated at a conservation studio in London and are planned to be reinstated as part of a new display of 66 works at the embassy next month.

The 2011 attack, led by hundreds of students described as members of the Basij militia by the Iranian state media, was likened to the seizure of the US embassy after Iran’s Islamic Revolution in 1979. The crowd ripped through the British embassy, pulling down the union flag, smashing windows and lobbing satellite dishes from the roof. They scattered thousands of papers in the street where they set alight British, US and Israeli flags. Six British diplomatic staff were briefly held by some of the mob, who were thought to be protesting Britain’s tough economic sanctions against Iran.

The full details of the lost and damaged pictures, together worth nearly £1.3m, were disclosed by the British government in 2014. Other decorative pieces such as ceramics and rugs were also destroyed, although their values were not recorded. None of the works were insured as the GAC is not permitted to insure its own works on a commercial basis.

Arts minister Michael Ellis, the MP that uncovered the figures in 2014, urged the British government at the time to seek compensation from Iran under the Vienna Convention. According to the DCMS spokesman, a compensation claim covering all lost and damaged works is currently being made to the Iranian government by the Foreign and Commonwealth Office. Relations between Britain and Iran are improving. In 2015, the British embassy reopened in Tehran and, in 2016, Nicholas Hopton, previously the British chargé d’affaires in Tehran, was appointed ambassador. That year, the GAC bought three more Persian pictures that were in the embassy’s possession, including a Qajar painting of Yusuf on the throne with servants and officials. They have all been restored in London and are due to return to Tehran.

The new exhibition marks another step forward in diplomatic relations between the two countries. “The fact that these works have been allowed to return to Britain for restoration is a diplomatic and trust-building exercise in itself,” Parratt says.

The earliest work to go on show, dating from 1642, is a portrait of Thomas Herbert who visited the court of Shah Abbas I as part of Sir Dodmore Cotton’s embassy from King Charles I in 1628. Herbert’s family motto, inscribed in Welsh on the painting, fittingly reads “each to their own custom”. Also included are contemporary works such as Derek Hirst’s 1975 Paradox series, created following the artist’s visit to Isfahan in central Iran, and a series of etchings called Round Dance by the London-based Iranian artist Shirazeh Houshiary (born in Shiraz), inspired by the poetry of the 13th-century Sufi mystic Rumi.

The plan is for the new display to be installed before Christmas, “but this will depend upon customs clearance on arrival in Iran”, the spokesman says. “We are working closely with the British embassy to ensure that this happens as quickly as possible.”