Meanwhile, the museum partners with a Chinese tech firm to digitise its catalogued collection 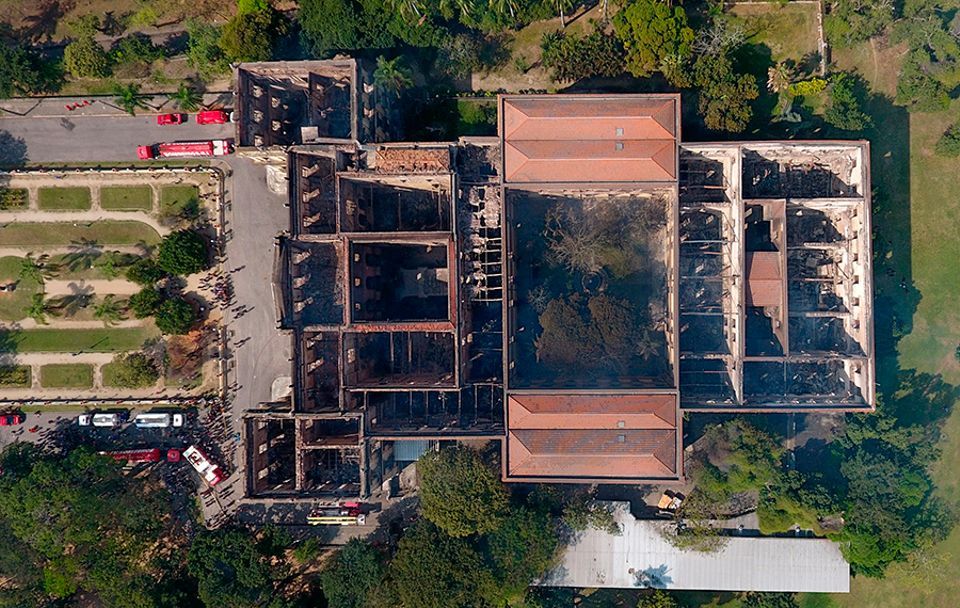 As months of seasonal rain descend on Rio de Janeiro, researchers working in the rubble of the gutted National Museum fear that the dampness could imperil salvaging efforts after September’s devastating fire. “There is rain and heat soon after, which is not good at all” for the objects, the researcher Cláudia Carvalho told Globo earlier this month. Ceramics, metallic objects and meteorites are particularly vulnerable, she adds.

Researchers project that more than 90 percent of the museum’s collection has been destroyed. Cristina Menegazzi, the officer in charge of the quixotic Unesco project to restore the building and rebuild its lost collection, told The Art Newspaper last month that the museum’s inventories “were not homogenous—each department and collection had a different inventory system and not all the items were catalogued, so at the moment it’s impossible to know what was destroyed”.

Meanwhile, the museum has announced that next year it will launch an “online museum” of renderings and photographs of items from the collection alongside audio and text clips. The project, called the Digital National Museum of Brazil, is being spearheaded by the Shenzhen-based technology conglomerate Tencent Holdings and was announced at the Brazilian Embassy in Beijing at a ceremony attended by the museum’s director, Alexander Kellner.

Some prized artefacts in the museum’s collection, such as Luzia, the oldest human skull discovered in Brazil, and various meteorites have been recovered from the debris, but most of the collection will need to be rebuilt with support from international museums and embassies, according to Menegazzi.

So far, the museum has received an initial 15m reais in federal aid, and it needs around 500m reais for the entire project. As reported earlier this month, there’s a looming concern among cultural figures in Brazil that the country’s new far-right president-elect, Jair Bolsonaro, could thwart reconstruction efforts, given that he has proposed folding the Culture and Education ministries into one department. In an open letter prior to the election, Kellner urges the elected official “commit to the reconstruction of the museum [with] a substantial budget”.