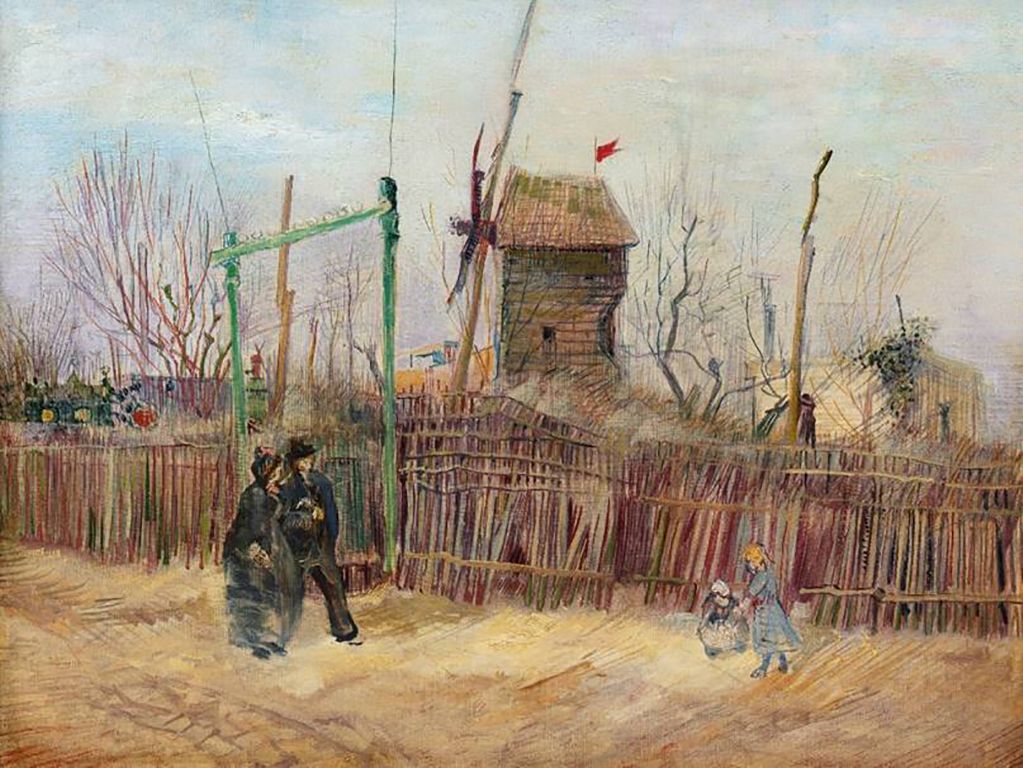 An 1887 painting of Montmartre in Paris by Vincent van Gogh is appearing on the market for the first time next month after belonging to the same French family for over a century. It is being sold on 25 March at Sotheby’s Impressionist and Modern Art sale in Paris in conjunction with the Parisian auction house Mirabaud Mercier.

Titled Scène de rue à Montmartre (Impasse des deux frères et le Moulin à Poivre) and estimated at €5m to €8m ($6.1m to $9.8m), the painting had never previously been exhibited. The only prior public exposure for the painting was black-and-white reproductions in catalogues.

Van Gogh painted the work in the early spring a year after arriving in Paris, where he was staying with his art dealer brother, Theo, on Rue Lepic. The canvas depicts a couple dressed in black walking past a former pepper mill, since demolished, that became a cabaret, with two children walking in the opposite direction. To the left, behind a wooden enclosure, is a carousel.

With its pale luminous sky, vivid use of colour and sense of movement, the painting is part of Van Gogh’s Moulin de la Galette series, portraying a district in Montmartre that was turning into a leisure and tourist attraction. It contrasts with the dark tones of his earlier works made in Belgium and the Netherlands, and predates the distinctly expressive style that he developed in Arles in the south of France.

“The majority of paintings from this Montmartre series are today in large international museums, so it’s extremely rare to still have one in private hands, especially one that has been with the same family for a century,” says Aurélie Vandevoorde, the head of the Impressionist and Modern Art department at Sotheby’s Paris. “Unlike other artists of his era, like Toulouse-Lautrec, Van Gogh was attracted to the pastoral side of Montmartre and would transcribe this ambience rather than its balls and cabarets.”

Van Gogh made around 200 paintings during his two-year stay in Paris, many of them smaller in scale, according to Vandevoorde. Montmartre was a favoured subject.

Etienne Hellman, the senior director of Impressionist and Modern Art at Sotheby’s in Paris, says the work was executed at a pivotal moment in the artist’s career. “After arriving in Paris, Van Gogh discovered the Impressionists in 1886, such as works by Renoir and Toulouse-Lautrec, and he met Paul Signac shortly before making this painting,” he says. “In Paris, he discovered the light—in the south of France he discovered the sun.”

The family consigning the painting had contacted Mirabaud Mercier, which entered into the partnership deal with Sotheby’s. “We have the impression that Van Gogh froze an intimate scene and [...] can feel that it presages the great Van Gogh that would emerge three or four years later with the Arles period,” says Claudia Mercier, an owner of Mirabaud Mercier. She adds that the painting, acquired by the family in the 1920s, had originally hung in an office.

The last work by Van Gogh that appeared at auction in France was a rare painting from his Dutch period that fetched €7.1m at Artcurial in 2018.

• To find out more about the Scène de rue à Montmartre read Martin Bailey's article on it as part of his Adventures with Van Gogh series, here