The Pakistani artist on shaping historical context and the Lahore Biennale

For the past 20 years, Rashid Rana has been at the vanguard of Pakistani art. When he left behind traditional painting for a photographic printmaking process involving the fragmentation and rearranging of mosaic-like images, his pixel-like works were something of a revolution on the Pakistani art scene at the time. I Love Miniatures (2002), in which he recreated a Mughal miniature with the use of photographic mosaic, played on ideas of identity and dislocation, an investigation of the states of flux that have come to de ne his oeuvre.

The images he selects, however, play on notions of subversion and conflicting realities of subverting stereotypes, asking the viewer to re-examine their spatial relationship with the work as they move between macro and micro understandings of what they are seeing. Images of luscious red carpets, for example, are actually comprised of myriad photographs of flesh and blood.

This fascination with the grid has manifested itself in many ways, as Rana navigates a post- Colonial reality in which, in the words of artist Michael Hilsman, he seeks to “transcend Western media stigmas and patriotic narratives.”

A new solo show, Scatter in Time, at Leila Heller Gallery in Dubai (until 22 April), along with work at the gallery’s booth at Art Dubai sees him turn his attention to paintings from Western art history. They are part of his ongoing Transliteration series, first glimpsed during My East is Your West at the 2015 Venice Biennale. 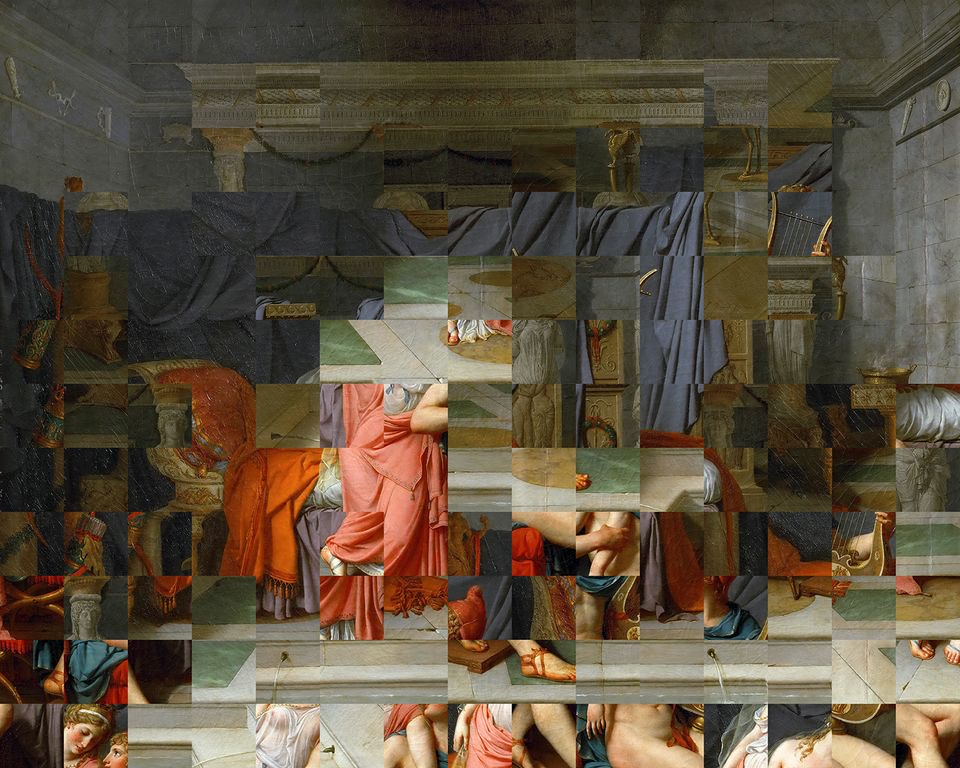 Now, he takes on a new challenge as artistic director of the inaugural Lahore Biennale, due to open in 2018. We spoke to him at his studio in Lahore on how he hopes it will redefine the parameters of not just what a biennale means for the city, but how the public can engage with it. Rana is also in conversation with Alistair Hicks on 15 March at Art Dubai Modern.

The Art Newspaper: These newest additions to the Transliteration series see you turn more to Western art history – why is that?

Rashid Rana: Every image has its own historical context and baggage. I wanted to liberate myself and my viewer from the specificity we give to any one image – by taking European paintings and rearranging their fragments I’m trying to see the possibilities beyond that one particular image, and free them from a specific time and place. By transliterating them, we liberate ourselves and see beyond their original contextual frameworks. In fact, these new works are different because for the first time ever there’s a sense of viewing the micro and the macro image at the same time simultaneously. It creates a different kind of surface tension.

You’ve developed software to create your fragmented works, and you used live video in Venice – is this idea of tech something you’d like to push more?

I remain open to the possibilities of what one can do with technology if it’s useful for my conceptual needs. However, I would like to try more complex iterations of my Venice live- streamed piece. I’d like to create versions in which there is no reference at all to which site we are looking at, to engage with audiences in multiple locations without ever revealing where they actually are, to create a strange kind of ‘third space’ in which one could get lost.

So how does audience awareness come into the Lahore Biennale?

I have always resisted the idea of playing into a notion of otherness. We don’t expect a Dutch artist to create in the style of Rembrandt, so why do we expect Pakistani artists to make miniatures, for example, and play to those stereotypes?

It is, and I have always resisted the idea that my identity as an artist is related to the place in which I was born, and that I have to find some kind of refuge or excuse in stylistic conventions of the past. And it’s great seeing the new generation of artists being able to break free of that too.

I’m hoping to encourage participants, through the curatorial premise, to propose transactions or projects that are not done with the intention of making art per se, but rather ideas that could be conveyed by some real life act.

Let me give you an example – how about a shop, put together in a way that it makes comments in some subversive way on consumerism, suppose. Rather than making a painting, a work, that conveys this idea, why not use a real life act or transaction? We live in a post-Duchampian age where anything can be art.

Will this reach the right audience?

In the context of Lahore, if I really want the biennale to speak to 10-11 million people, then I cannot do it through traditional gallery aesthetics or by importing certain kinds of works of art. I’m questioning the notion of art, what an artist is, and you can’t have an audience without the notion of art, so it begs the question: what is an audience? I think Lahore

is a perfect place to challenge these ideas. Also, importantly, artists will be free to do their projects wherever they are in the world. We live in an age where all of us use many intangible means to do many things, such as social media – expression does not necessarily result in a tangible, physical object. Creative expression can be anywhere.