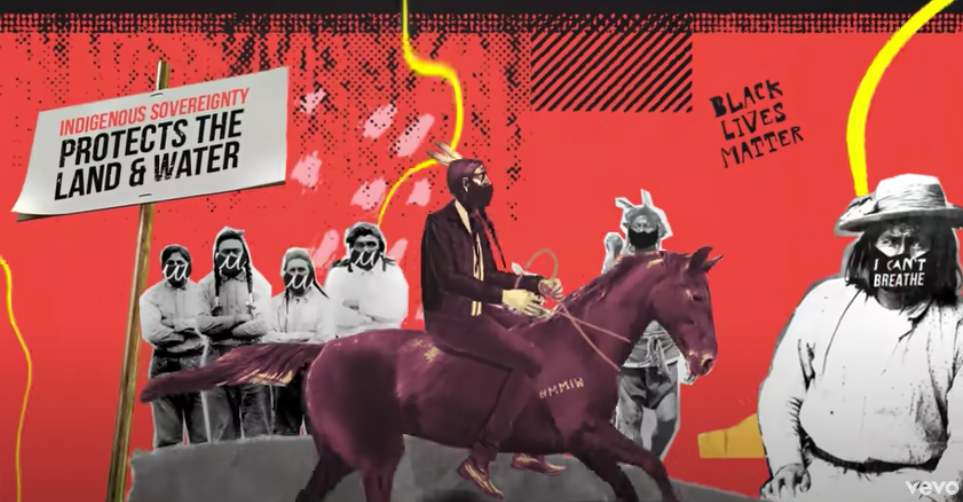 Still from Learned's music video for the 1974 hit "Come and Get Your Love" by Redbone. YouTube

More than four decades since the American rock band Redbone made history with the release of the 1974 single Come and Get Your Love, this classic “one-hit wonder”—which made them the first group of all-Native American members to achieve a Top 5 single on the Billboard Hot 100—has an official music video thanks to a collaboration between the Cheyenne-Arapaho artist Brent Learned and Legacy Recordings, the catalogue division of Sony Music Entertainment.

Learned's ledger-style video is both psychedelic and upbeat as well as poignant and political, chronicling the experience of an Indigenous man who embarks on a spiritual journey. After awakening outside of a tipi, the man traverses dystopian landscapes containing elements critical of the enduring impact of colonisation on Indigenous culture, like the fetishisation of Indigenous people in Hollywood. Included are archival and contemporary images of Native Americans, some of which have been updated with face masks—a reference to the outsized impact the coronavirus has had on many Indigenous populations—and Black Lives Matter signs.

The Oklahoma-based artist, well known for his colourful portrayals of Plains Indian culture, created the short film with the Mexican-born producer and director Juan E. Bedolla. He says the video serves as “an expression of universality”. The Redbone bassist Pat Vegas, who formed the group with his late brother Lolly Vegas in the 1970s, says the visual “really takes you on a journey” and gives us “something to help the young understand the old”.

Redbone's hit has enjoyed a recent resurgence in popularity after being featured in the 2014 blockbuster film Guardians of the Galaxy and, over the last year, its iconic riff has become video meme fodder on the app TikTok. Learned's music video is the inaugural release in Legacy's new catalog project in which the label will revisit major hits and much-loved songs from the pre-video era and commission contemporary visual artists to create new visual content to accompany them.