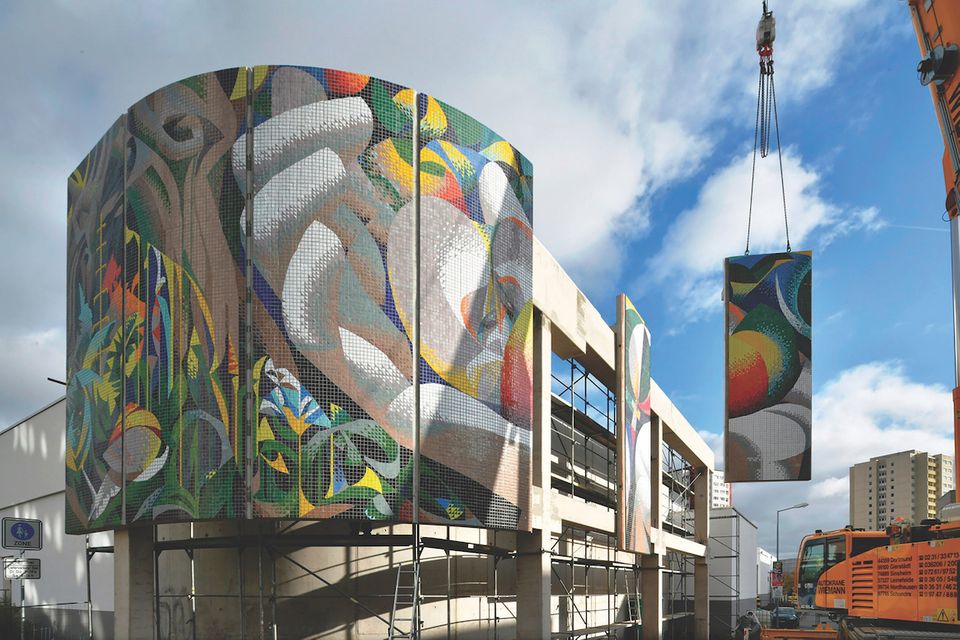 A large Communist-era wall mosaic comprising 70,000 glass fragments has returned to a square in the city of Erfurt after years in storage. Its reinstallation signals the beginning of a shift in attitudes toward East German public art, which has struggled for years to overcome entrenched perceptions that it is ideologically unsound, historically unimportant and eminently disposable.

The official inauguration of the eye-catching mosaic, Josep Renau’s Man’s Relationship to Nature and Technology (1980-84), is to be celebrated on 3 December. The street party, with bratwurst and glühwein for the local residents, will be the crowning moment of a four-year operation costing €800,000.

The mosaic was salvaged from a culture and leisure centre on Erfurt’s Moskauer Platz (Moscow Square) before the building was demolished. Seven metres tall and 30 metres wide, it depicts a pair of giant hands with open palms. The palm on the left cups an apple and a multi-coloured polyhedron nestles in the hand on the right. To the left of the apple are symbols of nature, and the right-hand side features geometric designs and a pair of compasses. The work pays homage to an ideal society in which nature nurtures human achievement and the two can co-exist harmoniously.

Its message is not overtly political, which may have been a factor in its survival, says Oliver Sukrow, an expert in East German art who has conducted extensive research into the mosaic.

“A lot of buildings have been torn down in the last three decades, and usually the art has gone with them,” Sukrow says. Among the many murals that have vanished is another work by Renau with a more pointed political message that once adorned a canteen in Halle-Neustadt, he says. “In the 1990s, the value of the art was not understood; people didn’t consider the quality and looked at it through an ideological lens.”

The Erfurt leisure centre whose facade the mosaic originally covered became a shopping centre after the fall of the wall. In a district of the city characterised by the featureless concrete high-rise blocks favoured by East German planners, it slipped into a slow decline. An investor stepped in to buy the building, planning to pull it down and construct a new mall on the site.

Under pressure from local activists and students of Renau, the mosaic was placed under heritage protection, sawn from the wall and stored in a container in 2009, and the building was demolished in 2013.

It remained in a depot until the Stuttgart-based Wüstenrot Foundation, owned by a financial services company, stepped in with funding to restore it. The foundation specialises in projects related to art and architecture that is underappreciated–recent examples include a campaign to save Brutalist buildings around the world.

“We find it more exciting to work on things that are undiscovered,” says Philipp Kurz, the managing director of the Wüstenrot Foundation.

For Kurz, one of the most fascinating aspects of the project has been investigating the biography of Renau, whose work is more highly valued in his native Spain than in Germany. Born in Valencia in 1907, he was a culture official in the Republican government responsible for overseeing the famous Spanish pavilion at the Paris International Exhibition in 1937, where Picasso’s Guernica was first shown.

Forced to flee Spain after Franco’s victory in the Spanish Civil War, Renau lived in exile in Mexico. There he met important exponents of Mexican muralism, including David Alfaro Siqueiros

“The Mexican achievement was to produce folk art with political content,” Sukrow says. This resonated in the young German Democratic Republic; in seeking to realise its vision of a utopian workers’ state, the regime allocated a percentage of the cost of new buildings for integrated art. Murals and mosaics adorned both the exteriors and interiors of new residential blocks, cafes, public offices, sports and arts centres, canteens and even pharmacies in the building boom that followed the Second World War.

By the time Renau moved to East Germany in 1958, the appetite for such art had diminished somewhat. The Erfurt mosaic, the most important of his commissions, was completed in 1984, after his death.

The new shopping mall where the work has been reinstalled is lower and smaller than the original building, so the mosaic had to be mounted on a specially made concrete structure about a metre in front of the façade. But Tobias Knoblich, the Erfurt city official in charge of culture, has no doubt that the expense and toil have been worthwhile.

“People liked the mosaic,” he says. “It was a part of the local identity. So much was lost after the fall of the wall in terms of cultural infrastructure that districts like this became quite lifeless. People feel thankful that the positive aspects of East Germany are slowly being acknowledged.”

The Erfurt project is “important, and above all, pioneering,” says Martin Maleschka, an architect from the eastern German city of Cottbus. He has documented dozens of threatened East German murals, mosaics and other architectural art of the era in photographs and published them in a book. Among those in danger, he says, are a mural by Ronald Paris in Rostock that has almost faded away and a ceramic work by Carl-Heinz Westenburger on a swimming pool in Oberwiesenthal.

“There is a new generation that grew up far from the ideology of the German Democratic Republic and values the art and architecture of GDR Modernism for its quality and craftsmanship,” says Maleschka, who was seven when the country ceased to exist. “I hope very much that more works in eastern German public spaces will be rescued.”

Acting on Maleschka’s advice, the Wüstenrot Foundation has made a commitment to save at least one more: an abstract mural by Karl-Heinz Adler and Friedrich Kracht in the foyer of the town hall in Plauen. The foundation remains open to further similar projects, Kurz says.