The Museo dell’Opera del Duomo in Florence reopened on 29 October after a renovation that took two and a half years and includes a full-scale re-creation of the original façade of the Duomo, the city’s cathedral. The €45m-€50m project, which increases gallery space from 2,000 sq. m to 6,000 sq. m, allows the museum to mount an ambitious new display of its many masterpieces, including Lorenzo Ghiberti’s Gates of Paradise (1425-52), Michelangelo’s Pietà Bandini (1547-55) and Donatello’s Penitent Magdalene (around 1455).

The centrepiece of the renovation is the great hall, whose dimensions rival those of the Sistine Chapel: 36m long, 20m high and 15m wide. It is now the largest single gallery space in Florence “and one of the biggest museum spaces in Italy”, says Timothy Verdon, the museum’s director.

The process began in 1998, when the Opera bought back a theatre that it had sold in 1778. The theatre’s scale allowed for the construction of a full-scale re-creation of Arnolfo di Cambio’s unfinished original façade of the Duomo, which was destroyed in the 16th century. The model, which cost €1.5m to build, includes dozens of original sculptures and copies. To design it, researchers pored over a 1672 Alessandro Nani redrawing of a 1586 Bernardino Poccetti drawing (now lost) of the cathedral’s 14th-century exterior.

The process, involving transcription and translation, left plenty of room for an art historical version of the game Chinese whispers. If 14th-century Florentines saw the new model, they might question the placement of some sculptures, Verdon admits. “Maybe they’d come back and say, ‘No. He was there.’” But visitors can now see the statues in approximately their original position and from the vantage point for which they were intended.

Opposite the façade are Ghiberti’s newly conserved Baptistery doors. Michelangelo is said to have remarked that the Old Testament-themed doors were “truly worthy to be the Gates of Paradise”. (The door from the south side of the Baptistery, created by Andrea Pisano between 1330 and 1336, is due to be restored next spring and, according to Verdon, should be back at the museum by early 2018. Until then, a copy stands in its place.) “This room, I believe, will launch a whole new generation of Renaissance studies,” Verdon says. “You can do an entire course on Renaissance art and not leave this room.”

The museum—which occupies the site where Brunelleschi had an office and where Michelangelo carved David—is a study in dialectics. The great hall with the reconstructed façade loudly proclaims Florentine power and wealth. Quieter rooms devoted to individual prayer represent the interior. 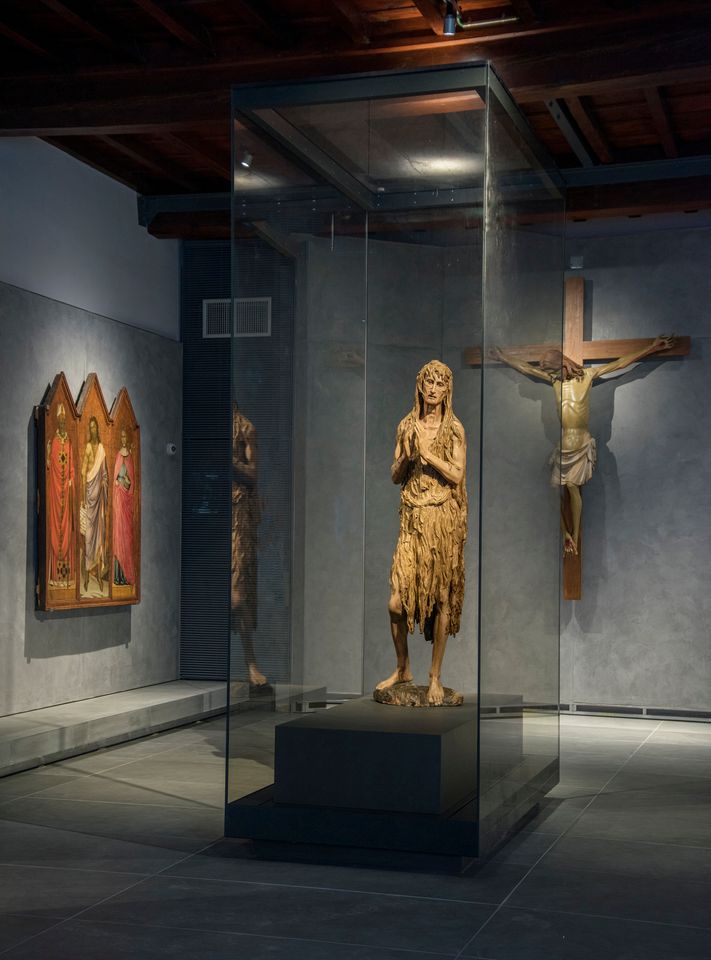 In one room, Donatello’s Magdalene faces an octagonal chapel consecrated to appease reliquary custodians who thought the works should not reside in a museum. Another sightline leads from the Magdalene to Michelangelo’s Pietà, the artist’s penultimate work, intended for his tomb, which he subsequently sought to destroy.

In another room, choir galleries (cantoria) by Donatello and Luca della Robbia hang on opposite walls. While the latter artist depicts orderly figures, those in the work of Donatello are poorly behaved and bacchanalian. “It’s a birthday party of three-year-olds, and they’ve all had too much Coca-Cola and chocolate and have gone berserk,” Verdon says.

As president of the national committee at the Opera, which was founded in 1296 to oversee the construction of the cathedral and has continued to operate ever since, Verdon had long pushed for a more professionalised museum. Before his appointment in 2011, the Opera di Santa Maria del Fiore had mounted just two exhibitions in 20 years. “I always said, like Cato at the end of every speech in the Senate that Carthage must be destroyed,” he says. “The new museum must have a proper staff.”