All known drawings from Francisco Goya’s private “Witches and Old Women” album are being presented in their original sequence, thanks to extensive technical research undertaken by conservators, curators and art historians. An exhibition at the Courtauld Gallery in London (until 25 May) marks the first time that all 22 ink drawings, which include depictions of elderly women fighting, witches carrying babies on their backs and pensioners dancing, have been shown together since their sale and dispersal in Paris in 1877.

In what the noted Goya scholar Juliet Wilson-Bareau calls a “feat in forensics”, conservators and curators spent months examining the sheets to determine the pictures’ correct order. Although Goya (1746-1828) meticulously numbered each sketch, eight lost their numbers over the years. The team analysed the brown and grey ink marks on the back of the drawings and “realised that some stains might be more than just accidental workshop marks”, says Stephanie Buck, the Courtauld’s curator of drawings. These offset marks corresponded with the sketches on the front, which means that the Spanish master drew the pictures in a bound sketchbook and not on loose sheets of paper that were later bound. Buck says that the discovery of the offset marks was instrumental in determining the correct sequencing.

Scholars date the album, one of eight made by Goya in the last 35 years of his life, to around 1819—five years before he left Spain for France, where he died. He began to create the private sketches in the albums while recovering from an illness that left him deaf. Wilson-Bareau believes that Goya would have regarded the works as some of his most prized possessions and therefore probably took them to France. After his death, the albums passed to his son, Javier, who reassembled them into three large volumes. When Javier died, Goya’s grandson sold the albums. “Witches and Old Women” and others were eventually taken apart and their drawings incorporated into albums factices, or “amusing albums” of prints and drawings, which were popular with 19th-century collectors. 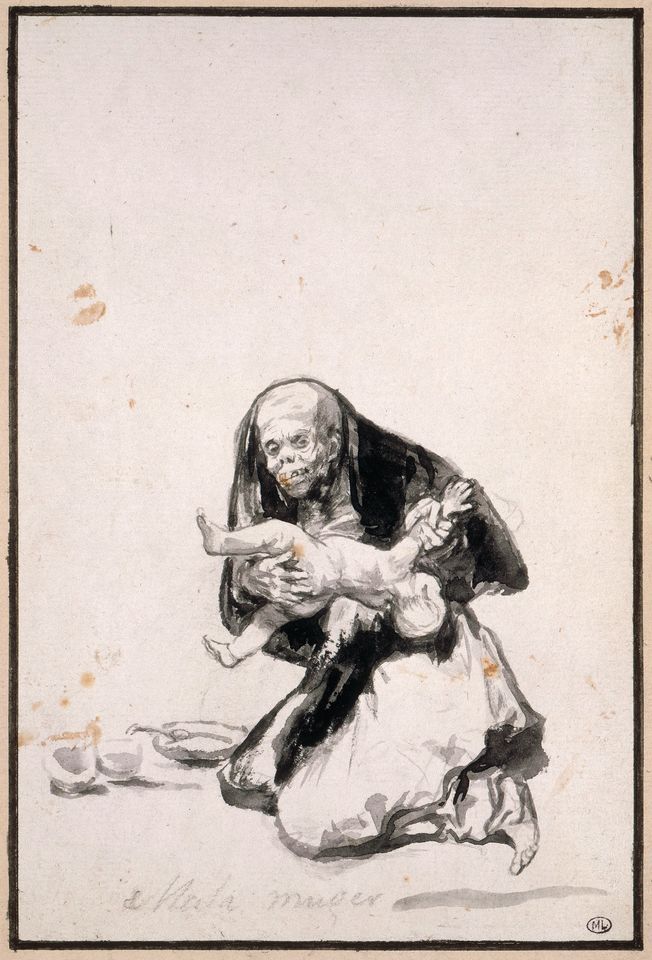 Kate Edmondson, the conservator of works on paper at the Courtauld, says she was “bowled over” by the emotions Goya could convey using a few simple brush strokes. “I was initially looking at the drawings from a materials and condition point of view, but I was increasingly captivated by the figures,” she says.