The Nîmes arena, where a restoration effort is expected to continue for 15 more years Ville de Nîmes

It is one of the best preserved Roman amphitheaters in the world, yet suffering all the same from centuries of water damage. So nine years ago, the city of Nîmes embarked on a €54m project intended to restore its arena to its former glory–one of the most ambitious conservation efforts ever undertaken for an ancient site in France.

Now the effort is changing direction. After focusing on the exterior, planners have decided that the renovation should also include interior passageways, galleries and the seating in the arena.

The oval amphitheater, 436 feet long, 328 feet wide and 68 feet high, was built at the end of the first century AD within the walls of the Roman city with limestone from local quarries. Designed to host massive public spectacles like hunts and gladiatorial games, it remains the most visited monument in Nîmes, with more than 300,000 tickets sold each year for concerts, bullfights and re-enactments of Roman battles.

Planners resolved from the outset of the restoration project to keep the arena operating, with 13,000 seats out 16,000 available. As a result, the restoration is expected to last 15 more years.

A crew of around 30 is at work cleaning each of the spans of the arena with a low-pressure water spray and then scrubbing them with a micro dry brush. Depending on the degree of water damage, the stones may undergo resin injections or dowel reinforcements, and a special mortar is used for screeding, or evening the surface. When the damage is so great that there is no other choice, the blocks are replaced with pre-sized Barutel stones.

“Only the severely deteriorated stones should be replaced”, says Goutal. And some rows may be left as they are to preserve the authenticity of the monument, given that it appears to be in good condition compared with others from the same epoch. While some Roman sites have deteriorated to such an extent that it is difficult to reconstruct their layouts, the arena of Nîmes is easy to navigate and therefore needs more reinforcing than it needs remodeling, he adds.

“Most Roman ruins made it impossible to imagine what life must have been like in it,” Goutal says. “This is why they were renovated to the fullest. The arena of Nîmes is in an exceptionally remarkable state.”

The first restoration of the amphitheater, which involved only a few rows, was carried out in the 19th century under the supervision of the legendary engineer Stanislas-Victor Grangent. In 2005, after a couple of minor interventions on the building, the city of Nîmes launched a study to analyze how extensive the water damage was. Workers experimented with restoring one span before opening a more thorough investigation into the history of the site.

Four to six spans will be treated at a time until the renovation is completed somewhere around 2033. 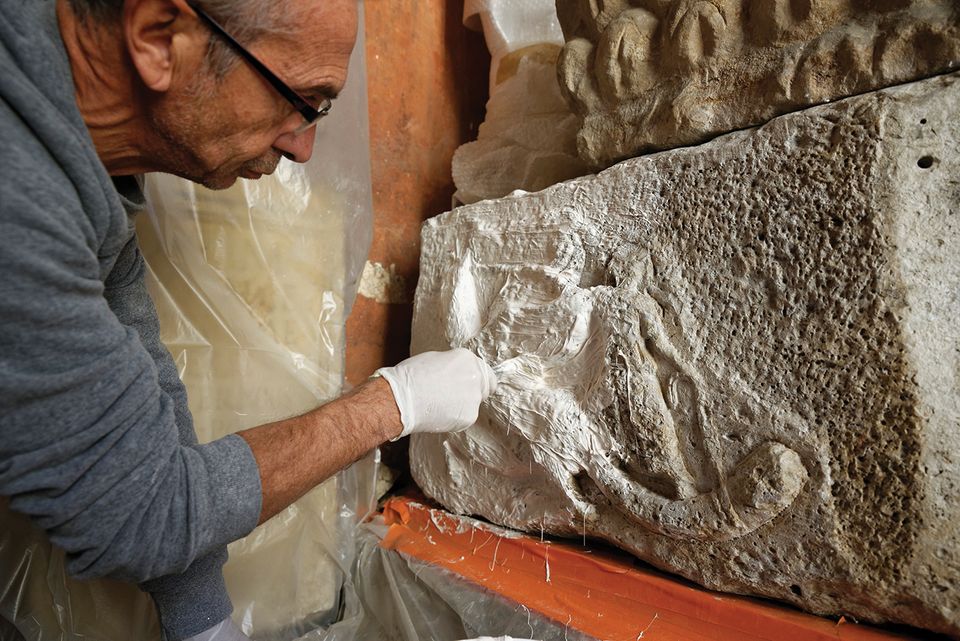