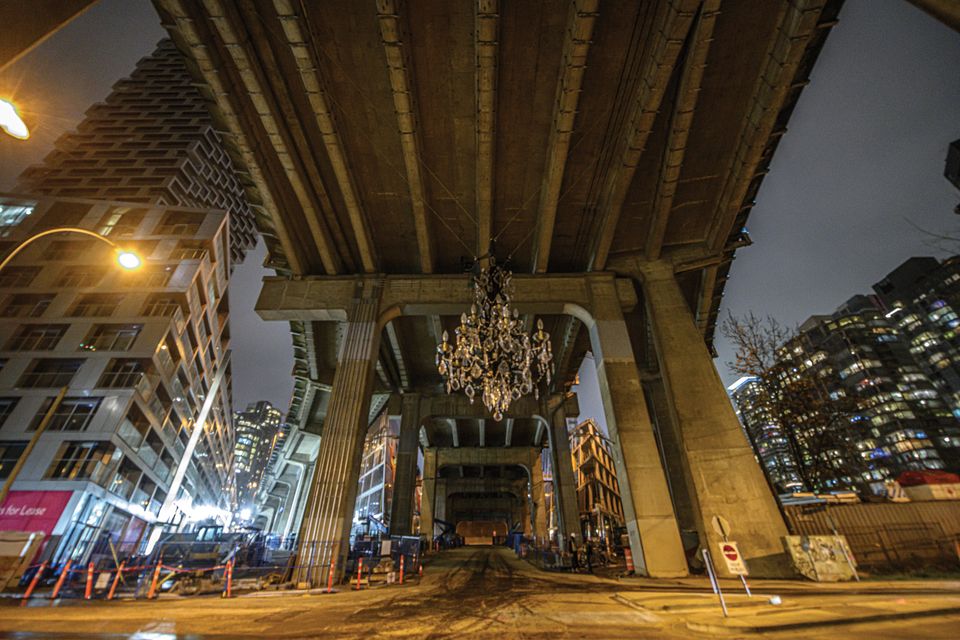 A “let them eat cake” moment: the huge chandelier hangs under a bridge that was once a haven for the homeless Mark Teasdale

A furious debate has erupted in Canada over the recently unveiled $3.6m public art installation by the Vancouver-based artist Rodney Graham called Spinning Chandelier, with critics angry about its cost, its intention and its very presence in a city facing a housing crisis.

The work’s installation under the arched Granville Street Bridge, an area of Vancouver that was once a haven for the homeless and is now part of the luxury developer Westbank’s new $575m Vancouver House tower project, has been vilified by critics who call it a catalyst for class warfare. That sentiment has been echoed online by affordable housing advocates and outraged citizens who consider the public work a tone-deaf gesture in a city where artists are being priced out of the housing market.

But some wonder if Graham is making a sly commentary on Vancouver’s dizzying real estate market with the piece. Based on his 35mm film loop installation Torqued Chandelier Release (2005), the 14ft by 25.5ft crystal chandelier slowly drops from its perch below the bridge twice a day, spinning and flashing its lights for four minutes, and then returns to its starting point. It is mesmerising to watch and as a contemporary “let them eat cake” moment, has provoked discussion about the purpose of public art.

“I think it is worthy of the outrage voiced by many,” says professor Patrick Condon, the chair of Landscape and Liveable Environments at the University of British Columbia. “It can be read as thumbing its nose at those unable to enjoy the lifestyles of the Vancouver investor class.” The 375 condominiums in the Bjarke Ingels-designed high-rise, priced between $300,000 and $9m, quickly sold out, with 35% taken by foreign buyers.

The Vancouver curator Jesse McKee, who has served on public art selection panels and is one of many signatories to a 2018 open letter against Westbank and its “artwashing agenda”, thinks the city’s vision for public art needs fine tuning. “Art that serves mostly to embellish real estate projects seems inherently conflicted,” he says, adding that public art commissions by developers are “often a contribution made in lieu of development taxes. It would be better to keep the tax and fund numerous more modest—but trenchant—projects in all parts of the city.” While the cost of Graham’s work was initially estimated at $900,000 in a 2015 proposal to the Vancouver city council, it rose to four times that due to the complexity of its installation. Westbank was allowed to pool public art resources from three of its other developments to fund the solo project.

While McKee acknowledges that “it takes several years for works of this scale to be planned, produced and installed”, he says that such a schedule “doesn’t work any more against the rate of land speculation and development in the city. Many in the cultural community are questioning whether the monumental and spectacular form can legitimately perform at this pace of change.”

Westbank replied to critics of the project in a written statement, published by the Canadian Broadcasting Corporation (CBC). “There is a pervasive attitude in our city that we must choose between contributing to social infrastructure or making other contributions, whether artistic or cultural, that are seen as less functional,” the developer wrote. “Westbank does not view this as an either/or situation.”

Eric Fredericksen, the head of public art at the city of Vancouver, notes that “public money was not spent on this artwork, which is fully funded by the developer”. Westbank realised the com-mission with the independent curator and Polygon gallery director Reid Shier and will take care of the work’s long-term maintenance.

How the work will be perceived as a permanent fixture to the Vancouver landscape remains to be seen. “Public art’s significance often emerges over time,” Fredericksen suggests. “The launch of Spinning Chandelier has attracted a great amount of attention and reaction, but its success in the city will be judged over a longer period.”