Rothko Chapel to be restored, and gain auxiliary buildings 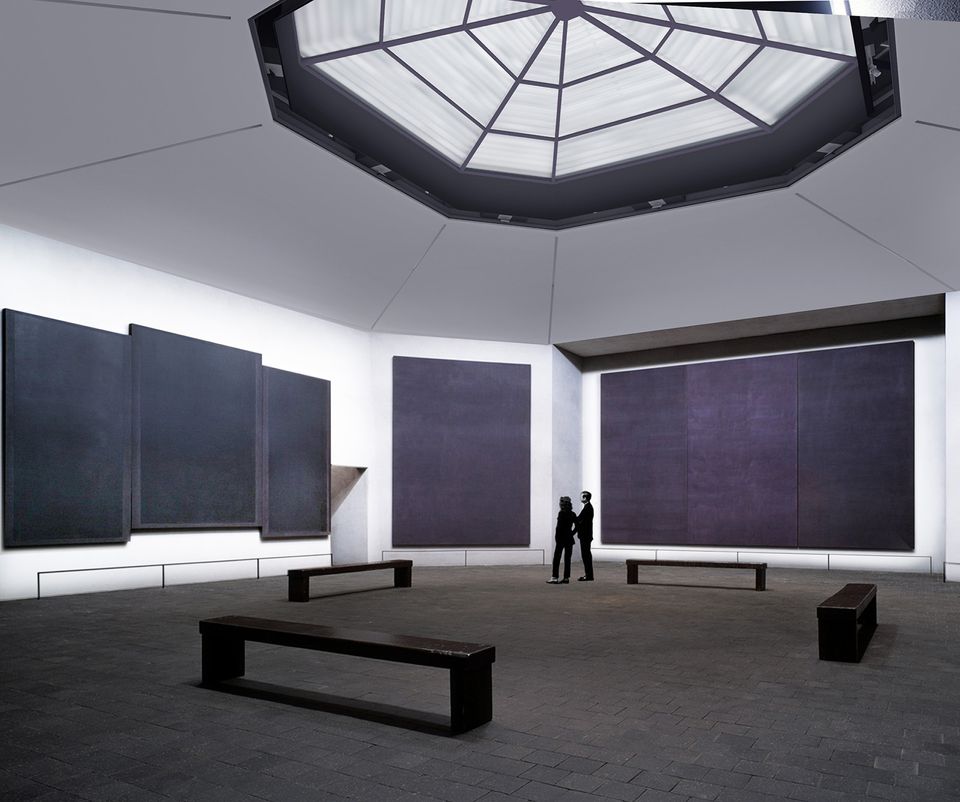 The interior of the Rothko Chapel in Houston © Architecture Research Office

For over four decades, the caretakers overseeing the Rothko Chapel in Houston have struggled to calibrate the natural light that pours through a skylight in the building’s roof, illuminating 14 paintings by the artist Mark Rothko.

The Texas sunlight often proved to be too bright, threatening to cause the monumental canvases in purple and black to fade, says David Leslie, the executive director of the nonprofit organisation that runs the chapel. Over the years officials installed a series of umbrella-like baffles beneath the skylight to partially block the sunshine, he says–essentially inserting what they came to see as an “intrusion” in a sacred ecumenical space designed for contemplation of the canvases.

“It was like a black disc hovering over you,” says Stephen Cassell, a principal with the firm Architecture Research Office (ARO).

Now a lighting designer has come up with a solution that will eliminate the baffle as part of a $30m project led by ARO that will also add new buildings to the 1971 chapel’s campus. On Monday, the octagonal chapel is to shut down for a restoration that is expected to last until the end of the year while a new visitors pavilion and an “energy house” for mechanical systems are also built.

A second phase of the project calls for construction of an administrative and archival building and a centre for public programmes, and the relocation of a bungalow that will serve as a guest house. Plantings will be redone on the two-acre site by the landscape architects Nelson Byrd Woltz, and a “meditation garden” will offer visitors respite.

The goal is to complete most of the work by 2021, when the chapel will observe the 50th anniversary of its founding by the Houston arts patrons and philanthropists Dominque and John de Menil.

George Sexton Associates has designed a new skylight with special glass to align with the original shape approved by Rothko, who was inspired by the light streaming through a skylight into his New York studio. Painted aluminium louvers immediately below the glass will filter the light, but the overall impression will be that “there is nothing between you and that skylight”, Leslie says. Cassell says that a new system of artificial lighting will also be able to project light in a shape that frames each of the paintings.

“My father loved the light in that studio and wanted to replicate it in the chapel,” says Christopher Rothko, the painter’s son, who leads the chapel committee overseeing the project as well as chairing a capital campaign to raise $30m. Leslie says that about $10m has been raised so far.

Glass partitions erected in the chapel foyer to control humidity and temperature will be removed. Instead, a pocket space between two sets of entry doors will shield the chapel from outdoor elements like temperature and humidity. The popcorn-style surface of the chapel’s ceiling will be replaced by plaster with acoustical properties.

Rothko’s 14 paintings, commissioned by the de Menils, are in “great shape” and will not require conservation work, Leslie says. They will be crated and stored during the first phase of the building project.

Beyond its contemplative function, the chapel is dedicated to promoting social justice and human rights and routinely hosts events like a climate change symposium scheduled this week. Those activities will shift to the new programme centre, which will also add events like film screenings and dance performances and allow the chapel to simply function as a place for reflection. Similarly, books, postcards and memorabilia will be sold in the new visitors pavilion rather than the chapel, “decommercialising” the sacred space, Leslie adds.

Christopher Rothko says the chapel had become somewhat overburdened by the press of events. "We have been using the chapel for all of our activities, which means that we are bringing in benches and stages and speakers two or three times a week," he says. For "people who may have come far around the globe, really, almost on a pilgrimage to see the chapel, all of a sudden this quiet space for contemplation becomes a bee’s nest of workers and equipment coming in and out, and it really interferes with the sanctity of the chapel."

Open 365 days a year, the Rothko Chapel estimates that over 100,000 visitors from more than 100 countries visit the building annually.

Rothko, who died by suicide in 1970, never saw the 1971 building completed; Christopher Rothko suggests that his father would have approved of the restoration and expansion project.

“This was something we needed to do, to do right by my father’s vision for the space,” he adds. It is “as close to a perfect solution as you could get”.