Following a wave of protests from Irish heritage groups, the Alfred Beit Foundation, which runs the historic Irish country estate of Russborough, has withdrawn a group of seven Old Master pictures from the forthcoming Christie’s sales in July. The group, which include paintings by Rubens and Guardi, were estimated to fetch between £5.3m and £8m and would have provided support for the cash-poor estate, once the property of the philanthropist and art collector Alfred Beit.

“Lessons to be learned”

In early June the National Gallery of Ireland warned of “lessons to be learned from the unfortunate circumstances” of the Christie’s sale. The Board of Governors and Guardians describes the Irish export licensing system for works of art as “wholly inadequate”, since—unlike in the UK—licences are granted on request without any opportunity for public collections to match the sale price. The gallery said “some of these works are of interest in principle to the National Gallery of Ireland”. Other organisations opposed the sale, including the Irish Georgian Society, the Irish Museums Association and the National Trust for Ireland (An Taisce).

On 24 June, in a surprise development, the Alfred Beit Foundation announced that it had decided to halt the Christie’s sale because of “a proposal by private Irish donors for the possible purchase” of works of art. If this proceeds, the pictures could be lent for long-term display at Russborough or the National Gallery of Ireland. The potential donors have not been named.

The Irish Times reported that withdrawing the pictures from Christie’s might result in a cancellation fee of £1.4m. It is unusual for fees to be disclosed, and (if confirmed) this sum is equivalent of 21% of the group’s mid  estimate. A spokesman for Christie’s declined to comment.

Russborough, 20 miles from Dublin, dates to the 1740s. It was bought in 1952 by Alfred Beit, the nephew of the South African mining tycoon (also named Alfred) who transferred the house and its collection to a charitable foundation in 1976. Two years later Russborough was opened to the public. Beit, who died in 1994, donated 17 of his finest paintings to the National Gallery of Ireland in 1987, including works by Vermeer, Goya and Gainsborough.

The house attracted 24,000 visitors in 2014, but high maintenance costs mean the foundation runs at a loss: its deficit in 2014 was €394,000. Judith Woodworth, the chairwoman of the foundation, says that the sales are now essential because Russborough has no endowment: “The alternative is to mothball this great house, put up the shutters and allow the house and the estate to fall into decay.” The foundation also stresses that all but one of the paintings earmarked for sale have not been displayed at Russborough for security reasons, following a series of thefts (see below).

There have been earlier sales. In 2006, the foundation sold 62 Italian bronzes at Christie’s for £2.6m, while in 2013 it sold 14 pieces of Chinese ceramics at Sotheby’s for £1.1m. Before the July sales were cancelled, two paintings by John Atkinson Grimshaw were sold by Christie’s on 16 June for a total of £112,500.

The foundation is seeking a meeting with the Irish arts and heritage minister, Heather Humphreys, “to establish the government’s support for Russborough for the future”. If arrangements over the private sale are not concluded by October, the foundation will proceed with a later sale at Christie’s.

No longer for auction in July 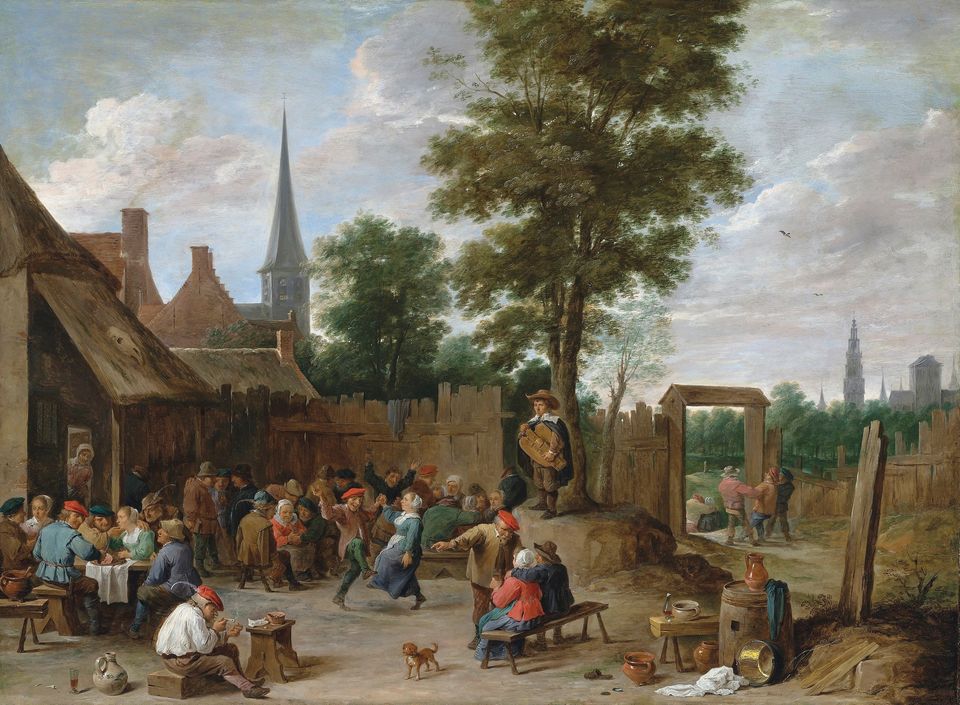 Teniers the Younger, A Village Kermesse near Antwerp (1640s)

Teniers the Younger married a daughter of Jan Breughel the Elder, whose work influenced his scenes of village festivals. This is among Teniers’s finest works. The spire of Antwerp cathedral is visible in the distance. Earlier owners included Napoleon’s brother, Lucien Bonaparte. Alfred Beit Sr bought the painting in 1894 and it passed to his nephew. 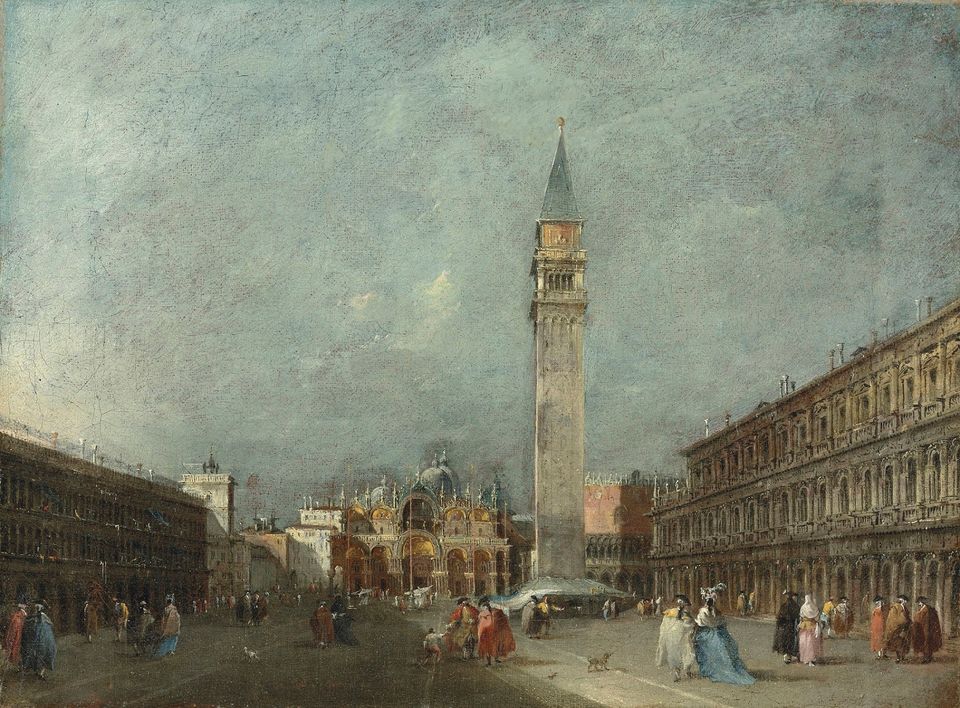 Francesco Guardi, Piazza San Marco, Venice, with the Basilica and the Campanile, with figures in carnival costume (1775-80)

This is one of Guardi’s most popular subjects, with 17 other versions of it being recorded. Alfred Beit Sr bought it in 1904, later passing it on to his nephew. The painting was stolen in 1986 and suffered minor damage, which was repaired. The Beits owned a Guardi pendant depicting Venice’s Piazzetta (1760-70), which was also to be sold at Christie’s, with the same estimate. 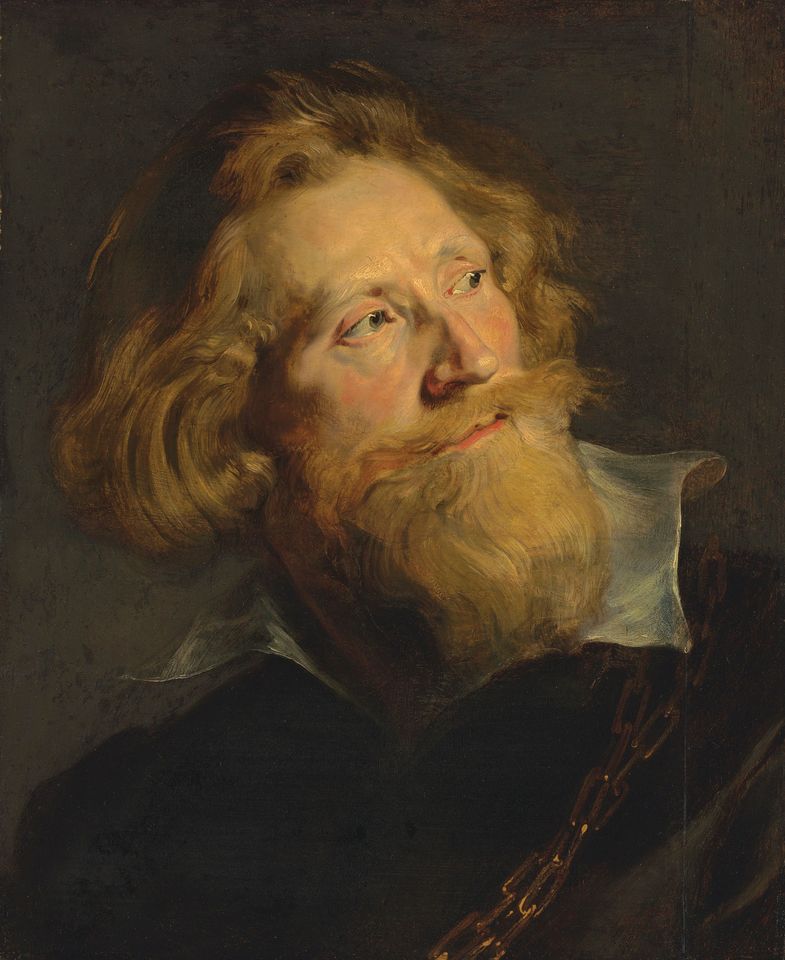 An oil study done from a model, this work is presumed to be for future use in a larger, multi-figure composition (although no such painting survives). Facial similarities suggest it is a depiction of the Antwerp collector Anthonis Cornelissen (1565-1639). A decade or two after Rubens’s death the study was reproduced as an etching. Otto Beit, Alfred’s father, bought the study in 1930. It was later stolen twice—in 1974 (quickly recovered) and in 1986 (recovered in 2002).

1986: Eighteen paintings were stolen by a gang that included the Dublin criminal Martin Cahill, nicknamed The General. Vermeer’s A Lady Writing a Letter, with her Maid (around 1670) was taken again. Nearly all of the pictures were recovered by 1995, some in The Netherlands and Turkey. A pair of small scenes by Guardi are still missing.

2001: A Gainsborough and a Bellotto were stolen. Both were recovered the following year.

2002: Five Dutch and Flemish pictures were stolen. All were recovered later that year.