Update, 3 March 2017: Syria's Directorate-General of Antiquities and Museums released early images of the damage at Palmyra on Thursday night, including the destruction of the central arch and façade of the Roman theater and the Tetrapylon, a four-sided columned gate that marked a crossroads of the ancient city. 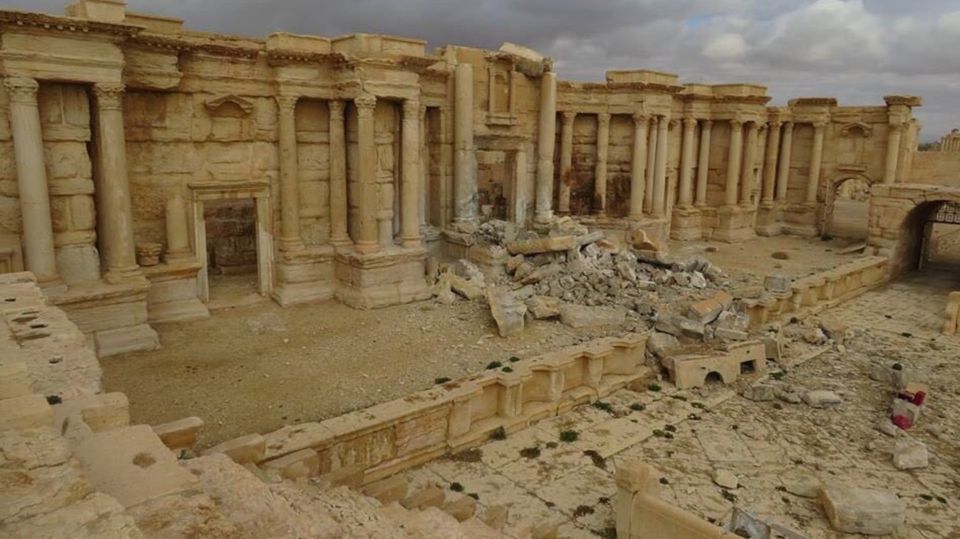 Early images of damage caused by Isil at Palmyra's Roman theatre after the city was retaken by Syrian and Russian forces in March 2017 (Image: Syrian Ministry of Culture, Directorate-General of Antiquities and Museums)

Syrian government troops have retaken Palmyra from Islamic State forces, with help from Russian air support, the Syrian army said in a statement on Thursday. Politicians in Russian welcomed the news as a triumph, as widely reported by the state’s media, but few details have emerged about the condition of the ancient site, where Isil has previously wreaked large-scale destruction.

Konstantin Kosachev, the chairman of the Foreign Affairs Committee of Russia’s upper house of Parliament, told the RIA news agency that the loss of Palmyra had been a tragedy and its recapture “is a powerful symbol of the liberation of Syria from the terrorist plague, of the return of the country to normal life and the return of Palmyra’s surviving treasures to all of mankind.”

But cultural experts were more cautious. Russia’s Ministry of Culture told the news agency that “the city has just been liberated and for now nothing is known about the state of the monuments.” Nadezhda Filatova, who is in charge of international cultural heritage and cooperation at the Likhachev Institute of Cultural Heritage, told the Interfax news agency that the organisation was ready to send a monitoring team that had been to Palmyra in 2016, but only once the military operation is fully completed.

“For now, it is unclear whether the entire territory is under the control of Syrian government forces,” she told Interfax. “I think that some more time will be required to complete the military operation, followed by removal of mines from the territory. It might take several weeks, during which access for specialists will be closed for reasons beyond our control.”

Isil first took Palmyra in May 2015 and the extremist group destroyed a number of important monuments, including the Triumphal Arch and the temples of Baal Shamin and Bel. The site was recaptured by Syrian government forces, with Russian help, in March 2016, then seized again by Isil last December.