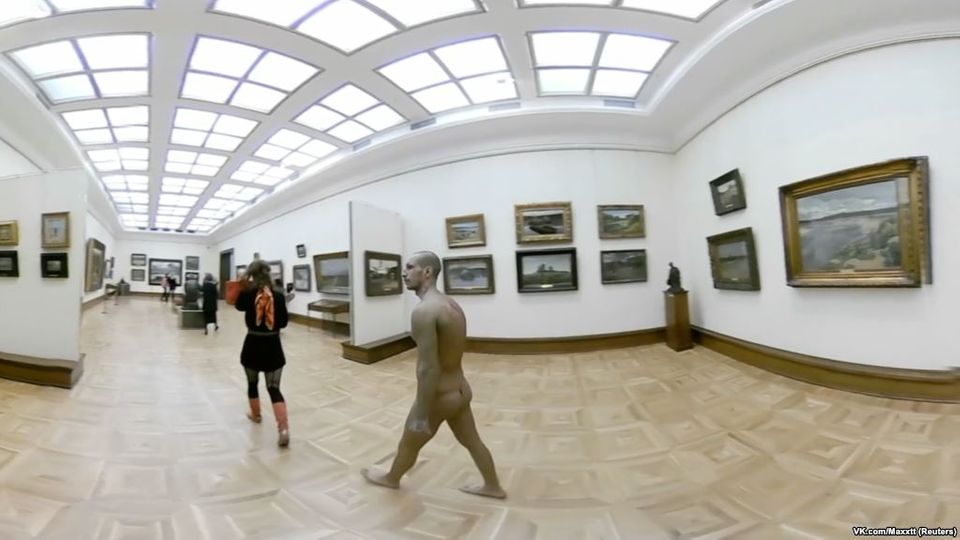 A naked man walks in Tretyakov Gallery in Moscow, Russia March 20, 2019 in a still image obtained from a social media video VK.COM/MAXTT via REUTERS

A man stripped down to his thong underwear in Moscow’s Tretyakov Gallery and paraded around the halls of the museum on Wednesday evening, in the latest bizarre incident at one of Russia’s most important institutions. The museum’s press office described it as “an unsanctioned performance of certain contemporary artists,” the Tass news agency reported.

The man, who has not yet been identified, appeared to be drawn to the works of Mikhail Vrubel, a late 19th- to early 20th-century artist known for his mystical themes. Tass cited a law enforcement source saying the man had undressed near Vrubel’s painting Christ in the Garden of Gethsemane, and video footage broadcast on Russian television news reports showed him staring at Vrubel’s monumental Princess of the Dream.

Another video taken by a museum visitor showed the man walking nonchalantly through the displays of Russian art at the Tretyakov’s main building in Lavrushinsky Pereulok, his back was covered in red runic symbols. The scene is reminiscent of the theft on 27 January of a painting taken directly off the museum’s wall.

Life, a tabloid website that posted the longest video of the incident, reported that once the man disappeared from the museum, it became clear that he had a sidekick who used the distraction to hang one of his paintings on the wall. Komsomolskaya Pravda posted a short interview with the accomplis. “This museum has become better,” after the painting was hung up, he said. “I come to the museum, see contemporary art, my heart is calm.”

The museum said in a statement that there had been no damage from the performance: “The result of this act was several small objects left in the halls.”