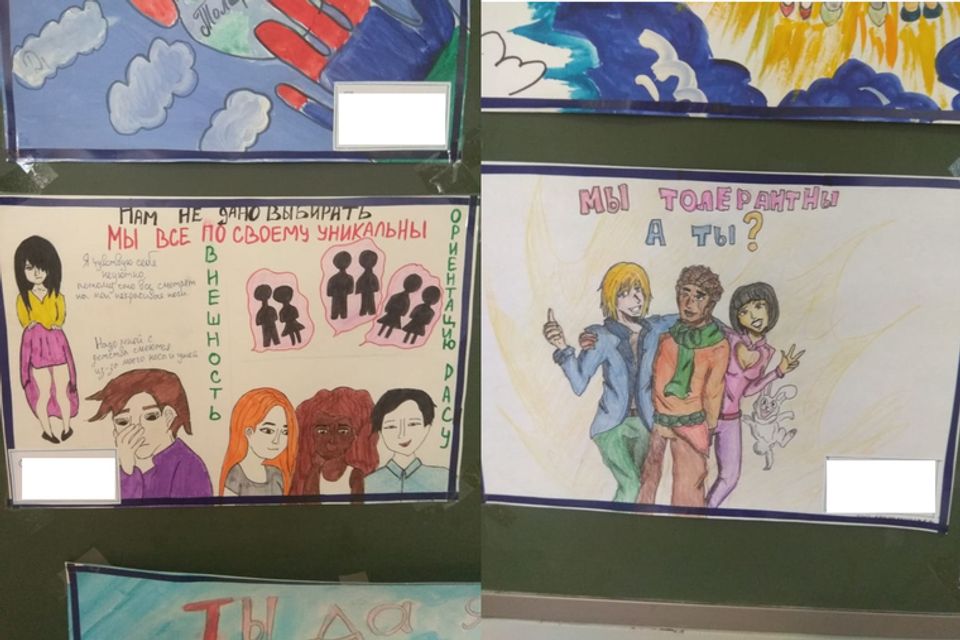 Examples of some of the works submitted by the students

Police officers in Russia’s fourth largest city, Yekaterinburg, have confiscated several drawings by high school pupils to investigate if they constituted “gay propaganda.” The 17 works were created to celebrate the International Day of Tolerance on 16 November. Officers are checking if they violate the Russian federal law “for the Purpose of Protecting Children from Information Advocating for a Denial of Traditional Family Values,” which was rubber-stamped by President Vladimir Putin in 2013.

The authorities seized the drawings after they were posted on pro-government website Ura.ru as part of a story with the headline, “Poster competition with gay and lesbian images held in Urals school.” The works by students from the fifth to ninth grades included captions such as: “We don’t choose our appearance, orientation, or race. We are all unique in our own way” and, “We are for peace! We are for tolerance!” Rainbows, heterosexual couples, children, and people of different races also feature in the drawings.

However, Yekaterinburg’s Department of Education told the Russian new agency Ria Novosty that there is nothing controversial about the works. “They reflect universal human values: friendship, respect, mutual understanding and acceptance of the values and attitudes of other people. In some works, a rainbow is depicted—a symbol of purity, childhood, friendship symbolising the unity of people of different nationalities." They concluded: "There were no drawings promoting non-traditional values.”

According to local news reports, psychologists were sent to School No.115 by the authorities and conducted “outreach work” with the students and teachers who organised the art competition. The regional Ministry of Internal Affairs told another local news outlet that examining the drawings will take 30 days and that it had received many negative responses to the contest from parents who have children at the school.

Russia’s “gay propaganda law” has come under fire in the past. Last year, the European Court of Human rights ruled that it “reinforced stigma and prejudice and encouraged homophobia.” Under the legislation, individuals deemed to be promoting “homosexual behaviour among minors” can be handed a fine of 5,000Rb (£59), while businesses and schools can be hit with a penalty of up to 500,000Rb (£5,900).