The deal with the Department of Justice, which also includes guilty pleas and a $8bn fine against Purdue Pharma, does not prevent future claims against family members or company executives 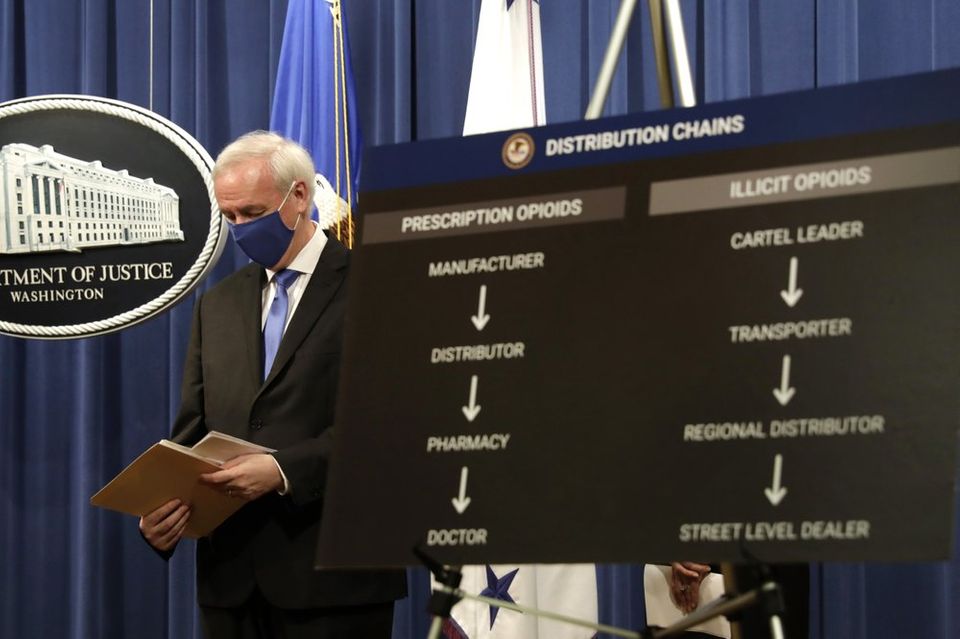 At a news conference held by Deputy Attorney General Jeffrey A. Rosen at the Justice Department in Washington, DC, a poster compares the distribution chain for prescription and illicit opioids Yuri Gripas/Pool via AP

Under a major settlement announced today by the US Department of Justice, members of the Sackler family involved with Purdue Pharma have agreed to pay $225 million in civil penalties to resolve the government’s allegations that the company's aggressive marketing of OxyContin caused doctors to overprescribe the opioid, leading to abuse and addiction.

It also settles the government’s claims that the Sacklers transferred assets from Purdue into holding companies and trusts to protect that money from future creditors in a bankruptcy case. However, it does not release the Sacklers or Purdue executives from criminal or civil claims in future lawsuits, the Justice Department says in a statement.

The Sackler family amassed a fortune through Purdue, and several members used the largesse to support cultural institution in the US and the UK. (Arthur Sackler, one of three brothers who built up Purdue Pharma, died in 1987, before the development of OxyContin, and his heirs sold their interest in the company before its release.) After the company’s involvement in the opioid crisis came to light, the artist Nan Goldin, who had suffered from addiction to the drug, started organising actions against the Sacklers’ “toxic philanthropy” at museums and galleries that have accepted funding from the family, including the Metropolitan Museum of Art, the Solomon R. Guggenheim Museum, the Tate and the Victoria and Albert Museum. Institutions began to distance themselves after family members were named in dozens of lawsuits filed by states and communities hit by the opioid crisis, and several announced that they would no longer be accepting Sackler donations.

In a statement, the Sackler family members said that those “who served on Purdue's board of directors acted ethically and lawfully, and the upcoming release of company documents will prove that fact in detail. This history of Purdue will also demonstrate that all financial distributions were proper.”

Their statement adds that the board “relied on repeated and consistent assurances from Purdue's management team that the company was meeting all legal requirements, as shown in hundreds of pages of compliance reports that will become part of the public record”. The family said the agreement with the US government was made “to facilitate a global resolution that directs substantial funding to communities in need, rather than to years of legal proceedings”.

The Sackler family will also give up its ownership of Purdue, which will be run as “public benefit company” after it emerges from bankruptcy. This means it will continue to produce “legitimate prescription drugs in a manner as safe as possible, but it will aim to donate, or provide steep discounts for, life-saving overdose rescue drugs and medically assisted treatment medications to communities”, the Justice Department says in its statement.

Critics of this move, including the attorneys general of 25 states that have filed lawsuit against the Sacklers and Purdue, say in a letter that “the Sacklers’ proposal to cloak the OxyContin business in public ownership compromises the proper roles of the private sector and government. Thousands of Americans have died, and it is a top priority of every state to enforce the law against the perpetrators whose misconduct caused the opioid crisis”.

Under the settlement, in which Purdue Pharma also pleads guilty to criminal charges of conspiracy to defraud the US government and violating the federal Anti-Kickback Statute, the corporation is fined $8bn by the US government. The accord must still be approved by the judge overseeing the company’s bankruptcy case in White Plains, New York.

The actual amount paid out by Purdue will likely be substantially less than $8bn, given that creditors must often accept a fraction of the debts owed in a bankruptcy. In its statement, the Sackler family says that none of its members “was involved in that conduct or served in a management role at Purdue during that time period”.

Massachusetts Attorney General Maura Healey said in a Tweet today: "DOJ failed. Justice in this case requires exposing the truth and holding the perpetrators accountable, not rushing a settlement to beat an election. I am not done with Purdue and the Sacklers, and I will never sell out the families who have been calling for justice for so long."

"This news is nothing to celebrate," says the group PAIN (Prescription Addiction Intervention Now). "The DOJ settlement with the Sacklers and Purdue is not a win—it’s a spin. The crimes have been laid out, but no one has been indicted. Headlines have reported an $8bn settlement, when in reality, the Sacklers have only been fined $225 million. This proves that there are two justice systems in America—one for billionaires, and one for the rest of us. If Purdue is made into a so-called 'public trust,' those they’ve harmed would be forced to be complicit in profiting off the future sales of OxyContin, the very drug that ignited this epidemic. Today's announcement has politicized the opioid crisis, falling conveniently before the election so that Trump can claim a victory. This is no victory for those who have been impacted by addiction and overdose."