Two weeks after winning a competition from more than 100 submissions, Lava Thomas’s commission offer was rescinded and the city said they would restart the process anew 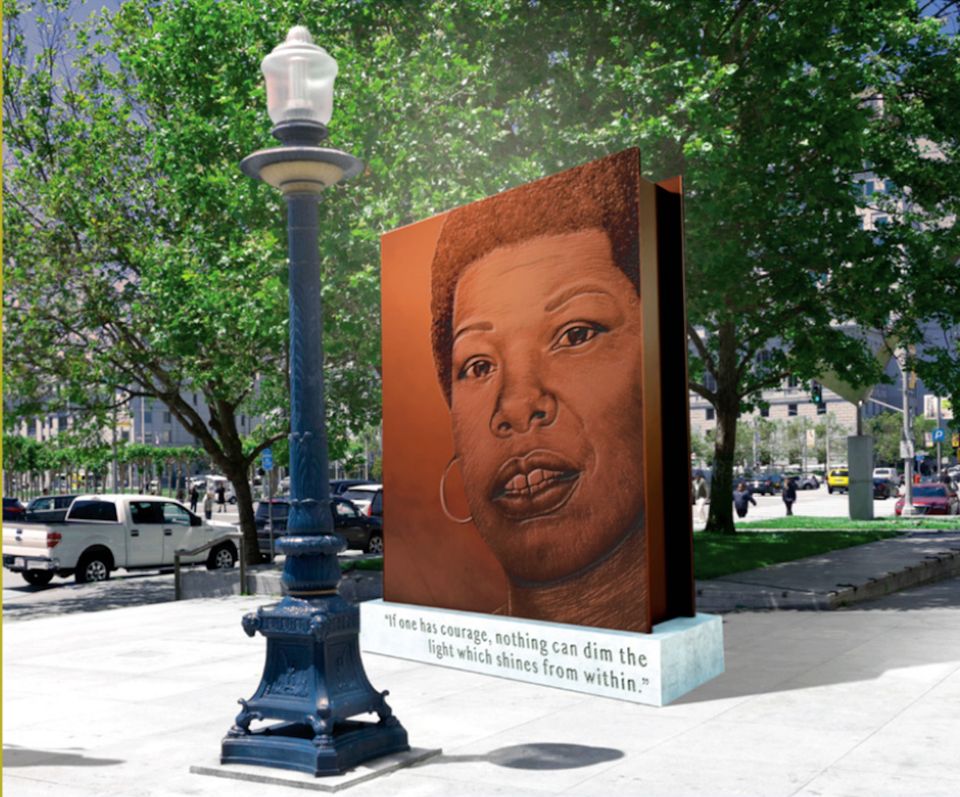 After a lengthy selections process, San Francisco’s Arts Commission announced that Lava Thomas would create the city’s planned monument to the author and civil rights leader Maya Angelou. Two weeks later, the city rescinded their offer and this week decided to restart the entire process over concerns that the top-rated work was not a traditional statue. “It’s a mess,” Thomas told The Art Newspaper. “I won on 9 August, then I didn’t.”

Legislation passed by San Francisco’s board of supervisors last year called for the creation of a Maya Angelou statue, and the city’s art commission intended to install it outside the Main Public Library. The law was part of a broader initiative to close the gender gap in the city’s public art collection, where only two of the city’s 87 sculptures—roughly 2%—depict women. One is a sculpture of Florence Nightingale installed outdoors near Laguna Honda Hospital, and the other is a bust of Senator Dianne Feinstein, which sits in City Hall by the former mayor’s office in Room 200.

The West Coast city would like to see female representation increase to at least 30% in the future, and it follows similar efforts from cities across the US. (In New York, a $10m programme called She Built NYC has already announced six new monuments to women in the making—and has had its own share of problems with the selection process.)

On Wednesday, District 2 Supervisor Catherine Stefani, who sponsored the public art legislation, called on the Arts Commission to restart the selection process with clearer criteria for a monument. “As I carried the legislation across the finish line to elevate women in monuments, I wanted to do it in the same way that men have been historically elevated in this city,” Stefani said at the meeting, according to the San Francisco Examiner. “It is incredibly important to me that we get this first representation right.”

What has happened is hella shady

When the Arts Commission released its artist call last November, it received more than 100 submissions. From those, a panel selected a shortlist of 13 artists and ultimately chose three finalists whose proposals went on display at the Main Branch Library. Only one of those finalists, Jules Arthur, included a figurative sculpture in their plans.

In her proposal, Thomas expressed a desire to convey Angelou’s achievements, intelligence and wisdom “to emphasise her insistence on our shared humanity, especially in this climate of increased racial hostility and polarisation”.

The work, which depicted Angelou’s face on a large bronze book, was inscribed with a quote by the famous author, who was also San Francisco’s first African American female streetcar conductor: “If one has courage, nothing can dim the light which shines from within.”

In an attempt to save her proposal from the legislative trash can, Thomas appeared at Wednesday’s Visual Arts Committee meeting with followers to demand more transparency in the committee’s operations.

“Artists rely on the integrity of the selection process when we apply for grants, fellowships, commissions, and residencies,” she wrote in a social media post advertising the meeting. “The inviolability of this selection process is the only professional guarantee that we working artists have.”

According to the San Francisco Examiner, her criticism of the committee was well-received by the meeting’s audience. “What has happened is hella shady,” said Angela Hennessy, an Oakland-based artist and Associate Professor at California College of the Arts, who served on the competition’s judging panel.

“I feel like the only fair way to move forward here is to give all the artists a chance to meet the legislative intent by issuing a new RFP [request for proposals] with clear criteria that adheres to the legislative intent,” Stefani told the committee, also expressing that she preferred the tabled proposal by Arthur.

The Visual Arts Committee’s chair Dorka Keehn referred to Stefani as among the “project sponsors” who “have the right to choose to not accept the recommendations of either the panel, the committee or the Arts Commission.”

"Given the lack of clear consensus on the selection, the Arts Commission’s Visual Arts Committee felt the best move would be to start this process over, and seek a more unifying outcome," the commission's acting director of cultural affairs Joanne Lee said in an email. "All artists who responded to the Request for Qualifications will be invited to compete in the next public RFQ."

But will Thomas consider resubmitting? “No,” she told The Art Newspaper by phone. “Dr Angelou defied convention, so to want a monument that is traditional and conservative defies what Dr Angelou stood for and what her life meant,” Thomas explained. “We artists want to break the bronze ceiling. The city should have treated us with professionalism, respect, and integrity.”

Ultimately, the committee agreed to reopen the project using a new description. "This will be an important, permanent work of public art," Lee said. "It’s more important to get it done right than to get it done fast." Whether or not the project will be completed by 31 December 2020, as currently stipulated by law, is another question.