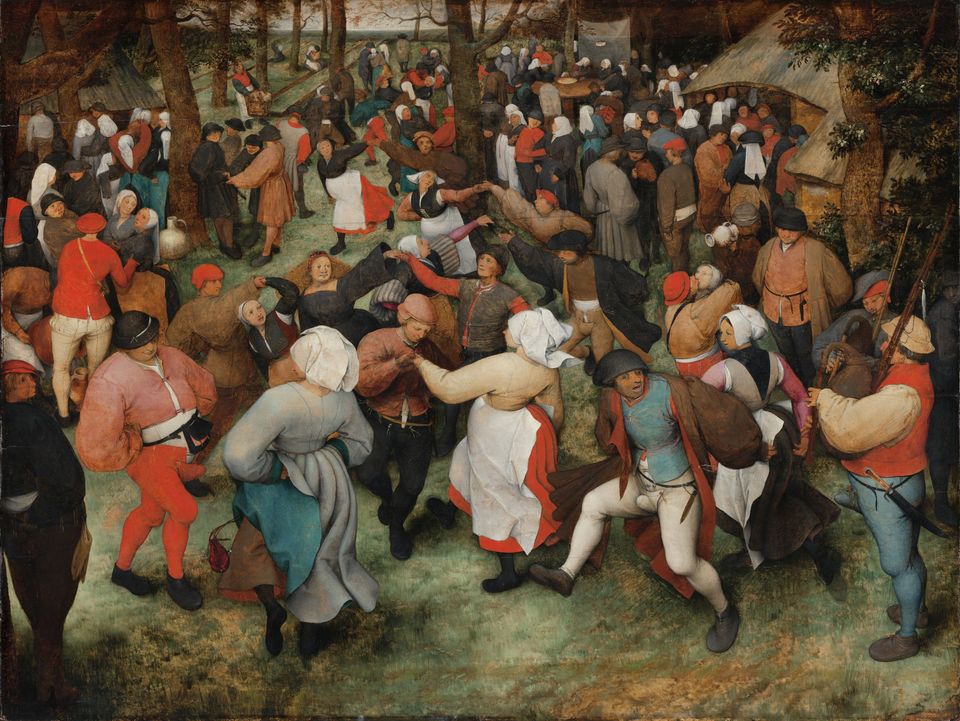 To mark the 450th anniversary of Pieter Bruegel the Elder’s death, the Detroit Institute of Arts (DIA) is showcasing its painting by the Netherlandish master: The Wedding Dance of 1566, acquired in 1930 in a bout of ambitious collecting that helped to vault the museum into world-class ranks.

In an exhibition opening Saturday and stretching across three galleries, the DIA will revisit the story behind the acquisition and deconstruct how the oil-on-panel work was painted, presenting four years of archival research and scientific testing by the museum’s European art and conservation departments.

The show, titled Bruegel’s The Wedding Dance Revealed, opens with the acquisition process, which was accompanied by great fanfare. The museum’s German-born director, Wilhelm R. Valentiner, who led the institution from 1924 to 1945, spent his summers collecting in Europe and spotted the painting in a gallery in London in June of 1930. Telegrams flew across the Atlantic between Valentiner and the Arts Commission, a board appointed by the city of Detroit to oversee the museum, leading to the negotiation of a purchase price of nearly $38,000 covered by municipal funds. 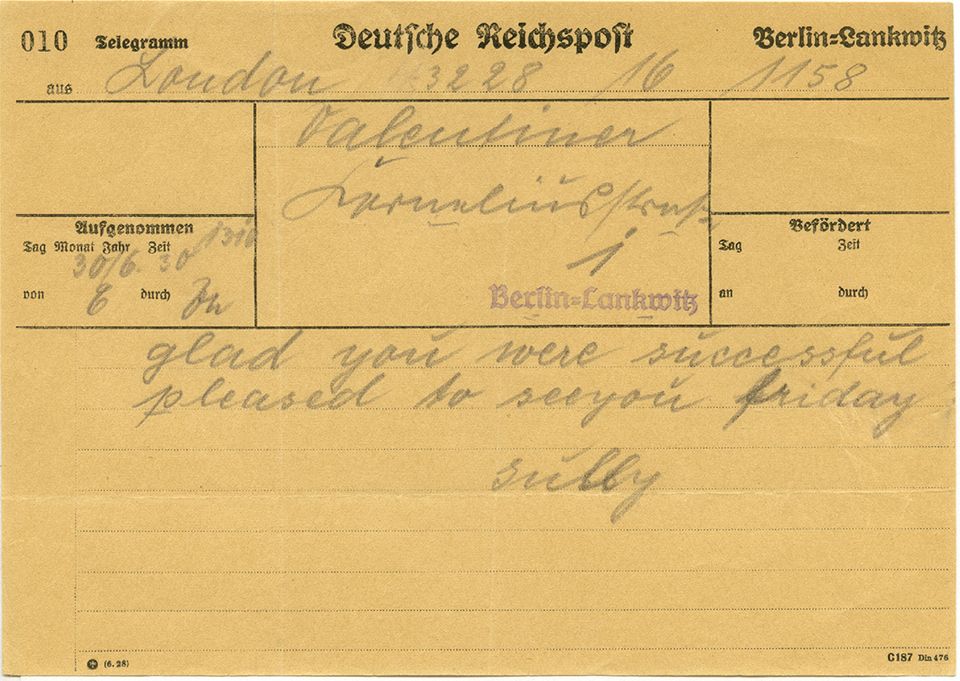 As a writer observed at the time in Art News, “the retrieving of Bruegel’s authentic panel is indeed a most lucky occurrence for the art world in general and especially for America and the Detroit Institute of Arts.”

The next gallery features the painting itself, presenting its vivid scene of dancing peasants unframed in a case that allows visitors to view it in the round. This space focuses on a visual analysis of the work based on discoveries by the museum’s science and imaging labs, including the composition of Bruegel’s detailed underdrawing. The final gallery focuses on the work’s creation in 1566, analysing what pigments and brushes were used. 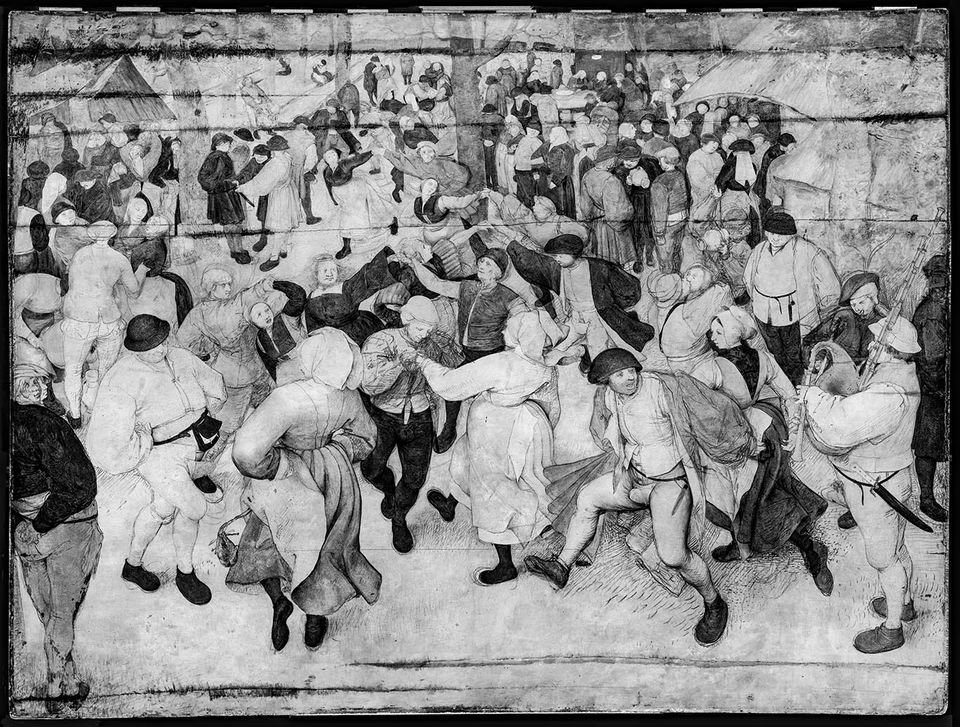 The show also revisits a 1941 restoration treatment that removed much of the overpaint that had been applied to The Wedding Dance over the centuries, leading to a surprising but humourous revelation: the codpieces adorning some of the dancing men. Close examination of the paint indicates that a vandal scribbled or scratched lines into the five most pronounced codpieces at some point in the painting’s history, following by their being overpainted.

“When they were revealed in 1941, the codpieces were not very welcomed,” says Ellen Hanspach-Bernal, the museum’s paintings conservator. “We have a lot of letters in our curatorial and registration files where people beg the museum to use the censored version in their publications. Even at the DIA in the 1960s, they were still using reproductions without the codpieces.” The exhibition delves into other details of the 1941 treatment, which left the painting with the abraded but authentic surface for which it is known today.

One of the more intriguing new conclusions of the conservators involves the horizon pictured at the top of the painting, which turns out to have been added by another artist. Tellingly, an underdrawing is missing beneath the paint on this added 2.5in strip of wood, and the pigments are more coarsely ground.

William Suhr, the conservator who treated the painting in 1941, conjectured that the strip was attached in the 19th century. But the museum's testing revealed the presence of lead tin yellow, which fell out of favour in the mid-18th century. As a result, conservators date the added strip to within the first 200 years after Bruegel completed the painting.

“I assume the reason it was added had to do with ideas of taste and what this kind of composition should look like–that it needed a horizon and a proper ending,” says Hanspach-Bernal.

The tests also shed light on Bruegel’s artistic process, including the spectacularly detailed underdrawing revealed by infrared reflectography (IRR). The artist apparently intended it to be a flexible draft: in the underdrawing, for example, he depicts the bride in the wedding dance with a crown but changes that to a headband in the finished painting.

Bruegel sketched the bride in The Wedding Dance with a crown in his underdrawing, left, but with a headband in the finished painting Detroit Institute of Arts

While Bruegel seems to have stuck with his general composition of the scene, he makes frequent adjustments to the positioning of hands, legs, feet and hems of the dancing peasants. Superimposing the underdrawing over the finished painting also reveal changes in some of the faces.

“It is a very searching, quick, almost frantic drawing where a lot of things are figured out, but at the same time it is remarkably secure in really transferring this really complex composition,” says Hanspach-Bernal. Lost to history, she notes, are the smaller sketches that Bruegel no doubt worked from in composing the underdrawing.

An analysis of the painting’s pigments with X-ray fluorescence (XRF) spectography showed that many of the reddish greys or browns in the painting were originally blues that have degraded over time, conservators report. XRF tests of those areas indicated the presence of smalt, a violet blue pigment made by grinding cobalt glass that was popular in the mid-16th century but often turned out to be unstable. The vivid vermilion reds in the painting thus would have been juxtaposed with violet blue, not the dusty brown we see today, creating a more vivid sense of movement, the conservators say.

Images in the exhibition will present hypotheses of how The Wedding Dance appeared when Bruegel completed it. “We actually recreated what we think the blue might have looked like in the painting before it shifted to that brown colour,” says Aaron Steele, an imaging specialist for the DIA. 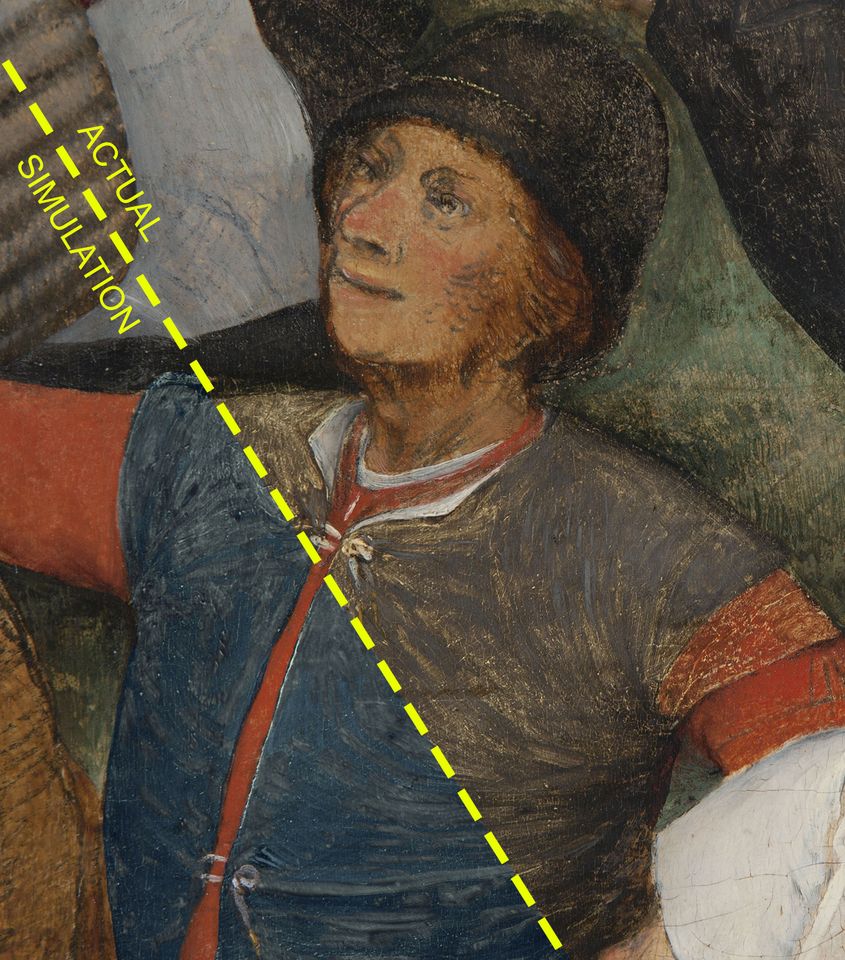 A composite image showing the painting’s current condition in the upper half and a digital simulation of how the blue may have originally appeared in the bottom half.  Detroit Institute of Arts

An analysis by a visiting dendrochronology expert determined that the oak pieces for the painting’s panel came from trees that were felled in the Baltic region an average of six years before Bruegel painted the work, Hanspach-Bernal reports. X-rays confirm that the individual planks making up the panel are joined with dowels. An expert, Tomasz Wazny, assesses the edge of The Wedding Dance's wood panel as part of a dendrochronological analysis Detroit Institute of Arts

In another insight, an analysis of the pigments through XRF spectography, visible near-infrared fiber-optics reflectance spectroscopy (VIS-NIR-FORS) and other techniques demonstrated that Bruegel used cochineal red lake pigment, most likely imported to Antwerp from the Americas, conservators say. This bright red dye, extracted from scaly insects, became a profitable export when Spain began colonising Central America in the early 16th century, Hanspach-Bernal notes: “There’s a real direct connection between that sort of economic situation and Bruegel’s practice of shifting to this new pigment.” Exhibits in the show explore the extraction of the dye from the insects.

Invaluable to the research for the show were two contemporaneous copies of The Wedding Dance, at the Royal Museum of Fine Arts Antwerp and the Gemäldegalerie in Berlin. Both copies are better preserved than the Detroit painting, giving researchers a notion of what the DIA’s painting probably originally looked like. For example, the bride’s face is much clearer in the Antwerp copy, titled The Dance of the Bride; and many of the areas in the original Wedding Dance that appear reddish brown are blue in the Antwerp copy, possibly because its creator used a more stable type of smalt.

One of the more striking discoveries of the conservation team was Steele’s discovery in 2015 of Bruegel’s signature, BRVEGEL, in capital letters below the date in the bottom right grassy area of the painting. (The artist had removed an H from his name in 1559.) Green overpainting probably obscured the signature when Suhr did his 1941 treatment, Steele writes in the Bulletin of the Detroit Institute of Arts, and it would have been cropped out in any case by the painting’s frame. The signature was detected through high-resolution imaging. 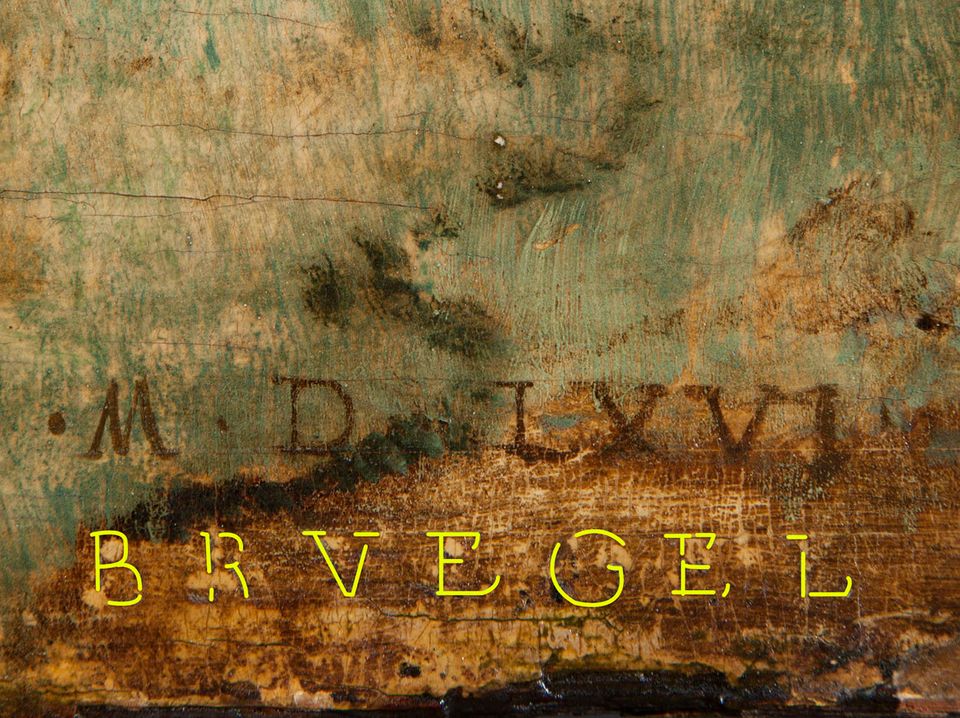 “It’s extremely abraded and very, very hard to see, but it’s there and it does match up with other Bruegel signatures, which is very nice,” he said in an interview. “So now we can publish it as signed.”