A detailed report calls the trade “the largest, legal unregulated industry in the United States” and recommends increased transparency and government oversight 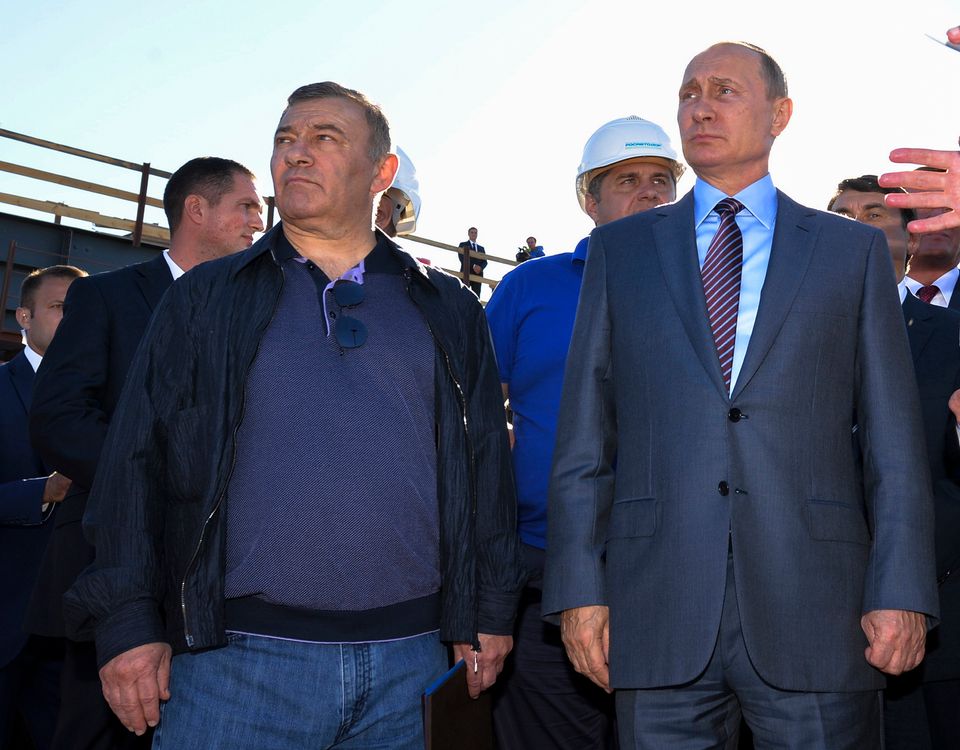 Russian President Vladimir Putin joins billionaire Arkady Rotenberg (left), during to a visit to the construction site of the Kerch Strait bridge in Kerch, Crimea. Investigators traced $18m in art purchases to shell companies linked to Rotenberg and his brother Boris, who are close Putin associates who American officials say benefited financially from the annexation of Crimea Alexei Druzhinin/Sputnik, Kremlin, File Pool Photo via AP

A Senate investigation has determined that within months of the US imposing sanctions on the Russian construction billionaire brothers Arkady and Boris Rotenberg, the duo illegally spent more than $18m on art in the US. Describing the art market as “the largest, legal unregulated industry in the United States”, a report on the inquiry released Wednesday found that the secrecy inherent in the trade allowed the brothers to skirt the government’s financial restrictions.

The report, by the Committee on Homeland Security and Governmental Affairs' Permanent Subcommittee on Investigations, also recommended a number of measures to increase transparency and tighten oversight of the art market, including amending the Bank Secrecy Act to apply to businesses handling high-value art, and providing official guidance for auction houses and art dealers.

It is illegal for a US-based company to have financial exchanges with people or organisations sanctioned by the government. Art dealers, however, are not required to know the identity of the purchaser of works, so blue-chip sales are often handled through an intermediary, as was the case with the Rotenberg brothers, the report says. The duo hired Moscow-based art adviser Gregory Baltser to purchase works through his private firm Baltzer, with funds traced directly to shell companies linked to the brothers, it states.

From May to November 2014, they spent more than $18m on art–including at least $6.8m shelled out for nine works at Sotheby’s New York Impressionist and Modern art day sale, including paintings by Marc Chagall and Georges Braque, and another $7.5m paid for Rene Magritte’s 1961 painting Chest, bought through a private US dealer, the report says.

The Rotenbergs’ relationship with Baltser continued for years, the report adds, and in 2019 both Sotheby’s and Christie’s competed for a chance to consign Bridge II by Lyonel Feininger—a painting that Baltser claimed was owned by a company incorporated in the Marshall Islands, despite Senate investigators asserting that it was likely owned by the Rotenbergs. Sotheby’s won the consignment and estimated the painting would make $5m, but it was ultimately withdrawn from auction due to a lack of potential bidders.

In a statement, Baltzer denied that it had been involved in such transactions. The firm “maintains a strict compliance program, and has never conducted any transaction prohibited by any sanctions list,” it says. “Baltzer can confirm that neither it nor Gregory Baltser has ever, at any time, represented or transacted in any way with Boris or Arkady Rotenberg. Baltzer strongly denies any suggestion to the contrary.”

In total, the report alleges that the brothers spent or moved around $91m after the imposition of the sanctions, $18.4m of which involved art and antiques. The duo are said to be members of Putin’s inner circle, and the 150-page report included an image of Arkady Rotenberg practicing judo with the Russian president.

“It is alarming and completely unacceptable that common sense regulations designed to prevent money laundering and the financing of terrorism do not apply if someone is purchasing a multi-million dollar piece of art,” said Senator Tom Carper of Delaware, who led the investigation along with Senator Rob Portman of Ohio, in a statement issued with the report’s release. “As a result, criminals, terrorists and wealthy Russian oligarchs like the Rotenbergs are able to use an unregulated art industry, as well as real estate and other investments, to hide assets, launder funds and evade sanctions. Unfortunately, our failure to close these obvious loopholes make US sanctions—an important national security tool—far less effective than they could be.”