The large object spotted by biologists resembles the work of sculptor John McCracken, or a prop from Kubrick's sci-fi classic 2001: A Space Odyssey 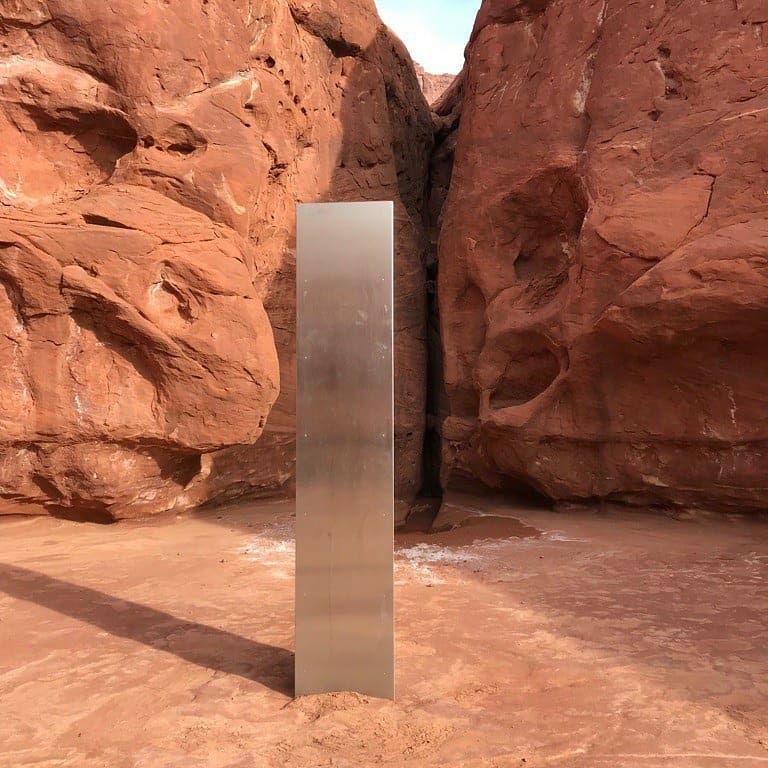 Update | A spokesman for David Zwirner has told The Art Newspaper: "While this is not a work by the late American artist John McCracken, we suspect it is a work by a fellow artist paying homage to McCracken."

A mysterious object resembling the freestanding plank sculptures of the late Minimalist artist John McCracken—or the alien-built monoliths in Stanley Kubrick’s sci-fi classic 2001: A Space Odyssey—has been discovered in a remote area of the Utah desert, prompting theories ranging from extraterrestrial visitation to avant-garde installation.

Biologists of the Utah Division of Wildlife spotted the monolith from a helicopter while conducting a routine count of bighorn sheep in the area. The location of the monolith has not been disclosed, but aerial footage showing the object installed within a red rock canyon suggests that it lives somewhere in southern Utah, which has a distinct topological landscape.

According to Bret Hutchings, the pilot of the helicopter, the monolith, which appears to be made from steel or metal, is between 10 and 12 ft tall and was likely installed on the site rather than dropped from above by celestial visitors. “I’m assuming it’s some new wave artist or something or, you know, somebody that was a big 2001: A Space Odyssey fan,” Hutchings told KSL news.

No artist has come forth to claim credit for the monolith yet, and David Zwirner, which represents McCracken, did not respond to a request for comment at the time of this writing. There is no known record of the artist's work installed in the Utah desert, although McCracken did live in-between nearby northern New Mexico and New York until his death in 2011.

The wilderness of the Southwestern US has a rich and storied history of Land Art and especially for works that retain their magic and mystery by being largely inaccessible or challenging to locate, from Robert Smithson’s 1970 magnum opus Spiral Jetty in the Great Salt Lake to Michael Heizer’s 1969 Double Negative near the Utah border in Nevada.