SFMoMA shows off its hard-won treasures

Richard Serra’s 213-ton, figure-eight-shaped sculpture Sequence (2006) is a fitting introduction to the expanded San Francisco Museum of Modern Art (SFMoMA), which reopened on 14 May after a three-year, $305m expansion. Like the sculpture, the new museum is immaculately constructed, blue chip and impossible to take in all at once.

SFMoMA is now the largest institution dedicated to Modern and contemporary art in the country. The ten-storey extension designed by Snøhetta, together with the original Mario Botta-designed building, offer 170,000 sq. feet of exhibition space: 26% more than the Museum of Modern Art and more than three times as much as the Whitney Museum of American Art in New York. The West Coast institution also has more space dedicated to photography than any other museum in the US.

The West Coast hustle In any city, this would be an accomplishment. In San Francisco, it is a triumph. The northern California metropolis is home to a handful of world-class collectors. But many have been more interested in setting up private foundations than donating work to an existing museum. Over the past 20 years, SFMoMA’s leadership has hustled, cajoled and sometimes compromised to add nearly 19,000 works to the collection. The museum’s director Neal Benezra left “no stone unturned”, says the local gallerist Anthony Meier.

The museum has also pioneered controversial new loan arrangements. The inaugural display includes 260 works owned by the family of Donald and Doris Fisher, the founders of the Gap clothing company. After an unsuccessful bid to build a private museum downtown, the San Francisco couple agreed in 2009 to loan 1,100 paintings and sculptures to SFMoMA for 100 years. The deal was a major factor in the museum’s decision to expand.

“Historically, museums have just expected major private collectors to give art at the end of their lives,” Benezra says. “But it stopped happening. We thought, ‘is there a different model?’” 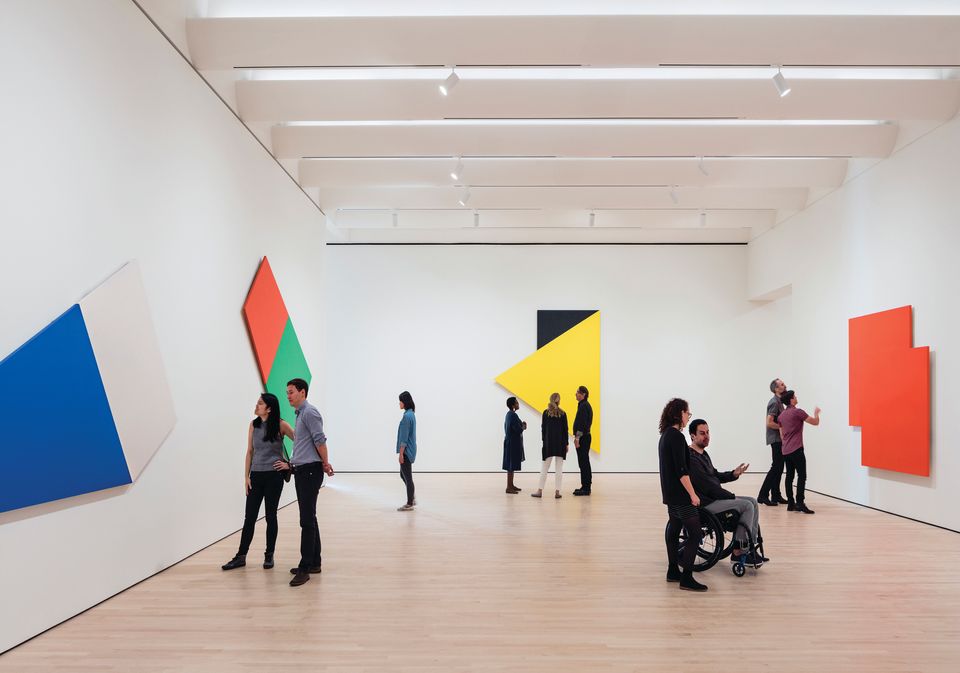 A gallery dedicated to works by Ellsworth Kelly from the Fisher Collection. Photo: © Henrik Kam, courtesy of SFMoMA

Historic loan, with conditions The loan comes with strings attached. The museum must organise Fisher-only displays once every decade. Furthermore, three quarters of the works on show at all times in designated galleries must be from the Fisher Collection.

Wandering the three floors of the new wing currently dedicated to the collection, it is clear why the museum was willing to compromise. It is one of the finest private holdings of US and European art in the world. (I had never seen a better Cy Twombly painting than the Fishers’ hypnotic, looping canvas from 1968.) The deal instantly makes SFMoMA a destination for the public to see mini-retrospectives of the titans of the 20th century. The collection includes 124 works by Sol LeWitt, 45 by Alexander Calder, 45 by Ellsworth Kelly and 24 by Gerhard Richter.

The collection is also the product of just two individuals’ taste. “The Fishers didn’t work closely with anybody other than each other,” says Sandy Rower, the president of the Calder Foundation. Perhaps unsurprisingly, it offers a limited picture. On some floors, women and artists of colour are almost entirely absent. Other artists get more real estate than they deserve (two galleries dedicated to Chuck Close is overkill). Simply put, the display reflects art history as written by the market victors. As Donald Fisher wrote in his autobiography in 2002: “One of my principles is to never buy an artist that I can’t sell at auction.”

The museum’s curators will have a chance to correct these imbalances when they begin to integrate non-Fisher works into the display next year. The museum is planning a show of double portraits that will juxtapose a David Hockney painting from the Fisher Collection with works by Frida Kahlo and Alice Neel from its own holdings. It is also preparing a focused presentation of art from the early 1960s, including work by Andy Warhol, Vija Celmins and Richter.

Bob Fisher, one of the couple’s sons and the president of SFMoMA’s board, says that the museum will “depend on collectors buying the art my parents did to tell the full story of these artists”. But in order to remain relevant, the museum must do the opposite. It must put the same determination and grit into expanding its holdings beyond the usual suspects as it did into building a blue-chip foundation.

The money behind the new museum The most difficult part of a museum expansion is not raising the money to build, but making sure that the institution can afford to keep the lights on for decades to come. SFMoMA’s annual operating costs are expected to rise from $35m to $65m a year. “I’m not sure museums were so attentive to that issue historically,” says Neal Benezra, SFMoMA’s director. To cover the increase, the museum more than tripled its endowment, adding $245m as part of a $610m capital campaign. Major donors include the banking titan Charles Schwab, the hotel executive Diana Nelson and the hedge fund manager Stuart Peterson. Before the museum closed for renovations in 2013, nearly half of its revenue was self-generated: tickets, gift shop sales and special events, for example. This arrangement “required you to do more popular interest shows than one might like”, Benezra says. The expanded museum will rely more on fundraising and the endowment (66% of the total operating budget, compared with 55% before). “We’re constantly trying to find the balance between being mission- and market-driven,” Benezra says.