Show and sell: the added value of a museum exhibition

How soon is too soon? Private collectors are selling off works as little as a few weeks after lending them to high-profile shows 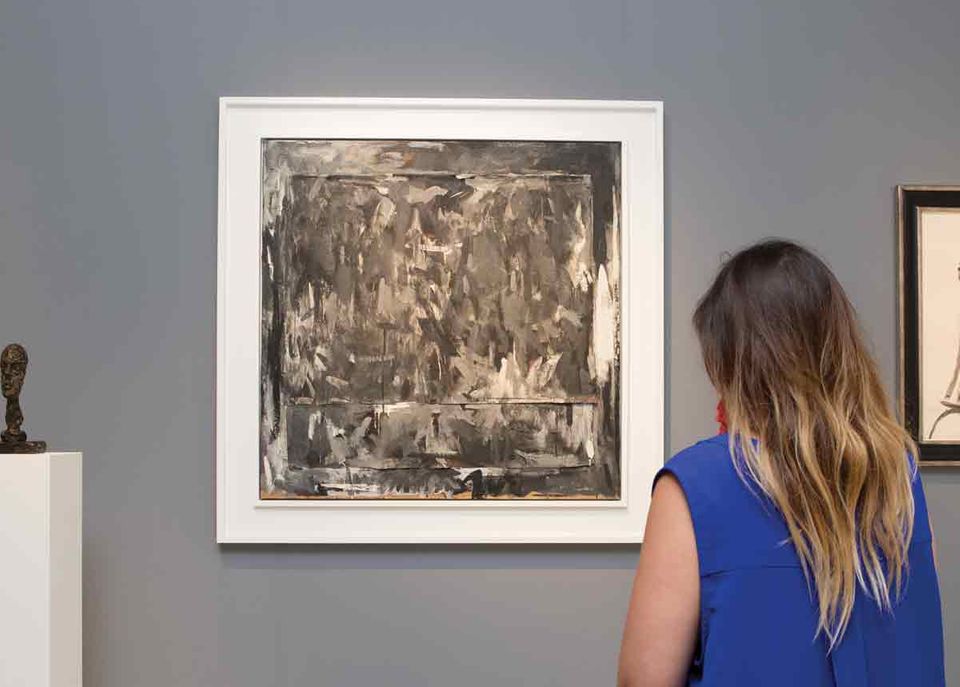 Jasper Johns’s Disappearance I (1960), priced at $18.5m with Di Donna, was shown at the Broad in Los Angeles last month www.david-owens.co.uk

As the art world gathers for the annual Art Basel fair, the talk is inevitably turning to the recent series of auctions in New York that racked up an astonishing $2.7bn and produced some stunning prices. Among these was the highest-ever third-party guarantee, at $150m, given by the Nahmad family of dealers for Modigliani’s sensuous 1917 painting Nu couché (sur le côté gauche).

Sotheby’s sold the work for $157.2m in New York on 14 May, but the sale was not without controversy. The languid nude had very recently appeared in Tate Modern’s blockbuster exhibition devoted to Amedeo Modigliani, which closed on 2 April. The work, lent by a “private collection”, was one of the highlights of the London show, which included another 11 nudes by Modigliani, now one of the highest-priced artists in the world. But some curators at the Tate were apparently shocked to see the swift appearance on the market of the work, which had been lent by the Irish racehorse mogul John Magnier.

The case is far from isolated. In the same week, Sotheby’s New York offered David Hockney’s Pacific Coast Highway and Santa Monica (1990) in its contemporary art sale. The work was recently shown in the Metropolitan Museum of Art’s Hockney retrospective, which ended on 25 February. Estimated at $20m to $30m, again with an irrevocable bid and a guarantee, the work fetched $28.5m with fees, setting a new auction record for the artist, even though it fell short of its target.

A few months earlier, at Sotheby’s London on 5 October, another work by Hockney, 15 Canvas Study of the Grand Canyon (1998), sold for just over £6m with fees (est £3.8m-£5m). The painting had been shown in Tate Britain’s Hockney retrospective, which ended on 29 May 2017, but had not continued to New York—rather, it had gone straight to the auction block. “Fresh from the walls of the Tate,” announced the auctioneer Oliver Barker as it came under his hammer.

At Art Basel this week is another work that recently appeared in a major exhibition: Jasper Johns’s Disappearance I (1960), which is on the New York-based dealer Di Donna’s stand. The folded canvas is covered with encaustic and once belonged to the late Alfred Taubman, a former owner of Sotheby’s, but failed to sell in the auction of his collection in 2015. More recently, it was shown in a Johns retrospective that opened at London’s Royal Academy of Arts and closed at the Broad in Los Angeles last month. The work is now being offered with a price tag of $18.5m.

In general, it is considered unethical to lend a work to a museum exhibition and then immediately send it for sale—but as Maurice Davies, the head of collections at London’s Royal Academy of Arts and the former policy director at the UK Museums Association, points out: “Common sense suggests that display by a reputable museum increases financial value… so museums can’t but help making a sale somewhat more likely.” He does question, though, whether this can be proved.

Nevertheless, museum directors try to avoid this scenario by imposing various types of contract on lenders. Maxwell Anderson, the former director of the Dallas Museum of Art, says: “When borrowing one or two works from private collectors, museums sometimes include a condition in the agreement that the loans not be sold for a period of several months following the close of the exhibition.”

The issue is a complex one, however. First, with such huge prices being achieved in the market today, museums and galleries have no alternative to borrowing star pieces for their big shows. In the case of Tate Modern’s current exhibition, Picasso 1932—Love, Fame, Tragedy (until 9 September), around one-third of the exhibits come from private collections, with a few from art dealers. The show focuses on a year that is among the artist’s most desirable and highly priced periods. Without the loans, the exhibition simply could not have happened.

Second, museums cannot be too difficult with lenders, otherwise they might not get the works at all—so they have to balance the need to get a significant piece with the possibility that it may appear on the market soon afterwards. They do not want to alienate lenders and so jeopardise future relationships, which is why, as Anderson says: “Museums are unlikely to hold a lender to [such a] condition; they are not litigious.”

The Tate says that in the case of the Modigliani, the institution’s loan agreement “states that works lent for exhibition must not be subject to ongoing negotiations for sale”, and that “the lender announced his decision to sell the work only after it had been returned to his care at the close of the exhibition”.

However, the alacrity with which Magnier got his painting to market—the press release announcing that it was to be sold appeared less than three weeks after the Tate’s show ended—indicates that negotiations were already well advanced while the work was still hanging in the exhibition. Magnier did not respond to a request for comment.

As for New York’s Metropolitan Museum, it sidestepped the issue, merely saying that “the Hockney—and all works of art at the Met—was displayed because our curators determined it to be a worthy example of an artistic achievement that our visitors would enjoy and deserve to see”. And the Tate was anxious to underline that loans enable the public to see works of art that are generally hidden in private collections.

Maurice Davies says: “Circumstances vary, and sometimes lenders know exactly what they are going to do well in advance—and maybe the museum turns a bit of a blind eye because they are so keen to have the loan. At other times, they are approached by an agent when the work is on display.”

The Modigliani and the Hockney are far from the sole examples of such “show and sell”. Back in 2008, the Estella collection of Chinese contemporary art was actually traded while still on the walls of Denmark’s Louisiana Museum and the Israel Museum in Jerusalem. In 2014, Magritte’s Les chasseurs au bord de la nuit (the hunters at the edge of night, 1928) was sent for sale at Christie’s London just weeks after the work was shown at New York’s Museum of Modern Art; other such instances have occurred regularly.

There is another way of looking at this issue, however. Since museums are unwittingly acting as showrooms for works subsequently sent for sale, perhaps they should benefit when those works make big prices—with, say, 1% of the price given to them.

Vendors may not have a legal obligation to do this, but they could have a moral obligation. Their works of art benefit from exposure in public shows, so perhaps the museums involved should benefit too. This would be good for museums’ budgets—and should not be too hard on the vendor.