The artistic legacy of Alighiero Boetti, whose star has been in the ascendant in recent years, is to be reassessed courtesy of Luca Massimo Barbero. The director of the art institute at the Fondazione Cini says his show dedicated to the late Arte Povera artist, which opens today (12 May) at the Fondazione Cini, will throw new light on how Boetti conceived and executed his works.

The show, organised in collaboration with the Archivio Alighiero Boetti in Rome and the London and Paris-based Tornabuoni gallery, brings together the largest and smallest examples from Boetti’s most famous series, dating from 1967 to 1994: his Ricami (embroideries), Aerei (planes), Mappa (map), Tutto (everything; his final series of embroidered works) and Biro (works made with a ballpoint pen). There are 11 sections in this non-selling show, with two works on view in each.

Barbero says that he wants to move away from the thematic slant that curators tend to favour. “The idea came about after discussions with different curators, especially Agata Boetti [the artist’s daughter]. The idea is to make a rigorous comparison between the concept of dimension and its development. We can assess in some cases how the largest works were conceived before the smaller pieces, and paradoxically, see how the embroideries were reduced to certain dimensions. The curatorial thesis allows us to see these works up close and from a distance, almost like double vision,” he says. 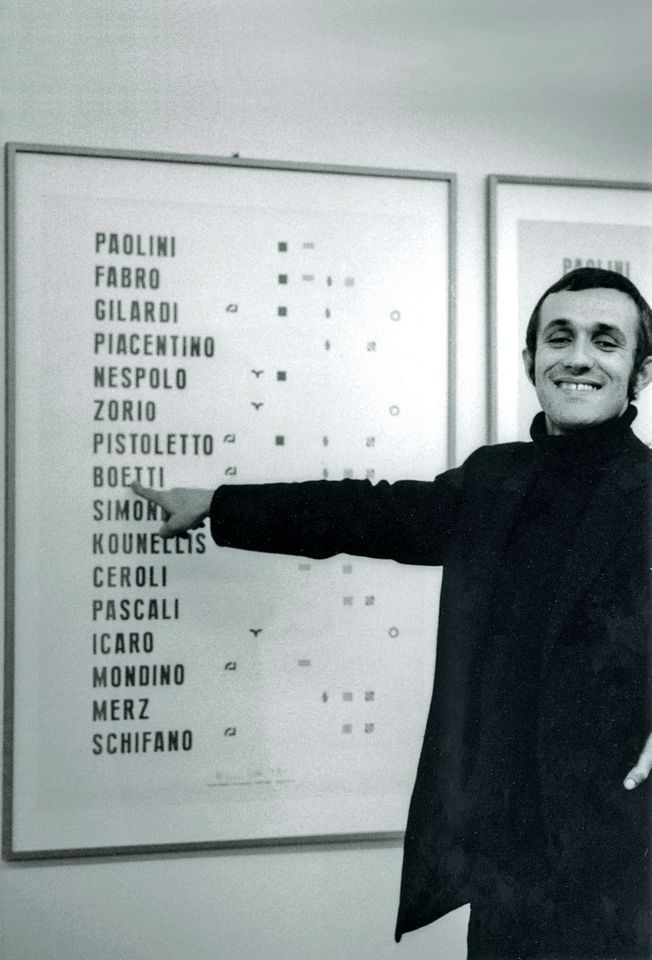 Barbero says the show will include some surprises. “The little-known work Estate ’70 [summer ’70] encapsulates the show’s philosophy, and Boetti’s methods. It was made one summer at Franco Toselli’s gallery in Milan,” he says. The piece, on loan from the artist’s family, is a 20m by 2m length of wallpaper, onto which Boetti drew a grid, and then applied coloured stickers. “His thought processes were free, natural and awash with images. In some ways, his combinations are like those of a computer.”

Other loans include the watercolour triptych Aerei (1989) from the Fondation Carmignac in Paris, Mimetico (camouflage) (1967) from the Fondazione Prada, and Lavoro Postale (permutazione) (postal work (permutation)) (1972) from the Stedelijk Museum in Amsterdam. Titoli (titles) (1978), a large-scale monochrome embroidery, is another highlight. The show culminates with Copertine (magazine covers) (1984), a series in which Boetti and his assistants traced a multitude of magazine covers in pencil.

The Tornabuoni gallery has a strong personal connection with Boetti. “He was a good friend of my father Roberto, who founded the gallery in 1980,” says Michele Casamonti, the gallery director. He stresses the show is not a retrospective: “We think that now is the moment to discover something new about Boetti, to go deeper and research a theme that has relevance to art practice today. That is why we came up with the idea of looking at his formats in Minimum/Maximum. Whether the work is 20m long or the size of a piece of paper, the idea behind it is the same—the smaller one is not a study for the larger one; it is the same idea on a different scale. We hope this show reveals some of the invisible rules behind Boetti’s work that guide everything he does.”