Something in the stars? Art world goes spiritual

With artists and galleries embracing the new age, is there a commercial pull, too? 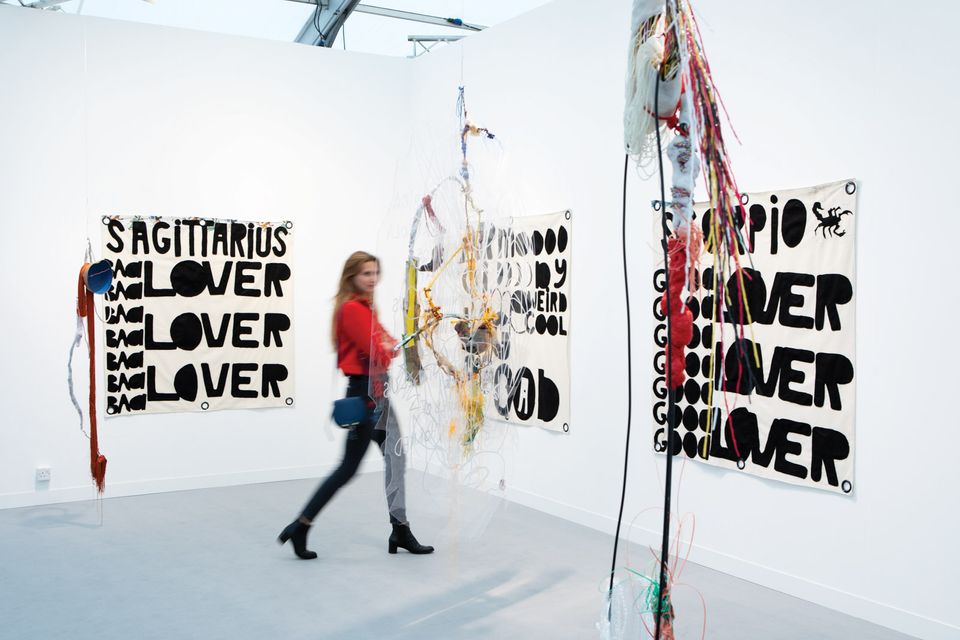 Spirituality is on trend. Tarot, the occult, astrology, meditation apps, crystals—as political turmoil surrounds us, interest in “new age spiritualism” is booming. And this week, the esoteric is in the ascendant at Frieze and in numerous exhibitions around London.

“I think today people realise that science doesn’t have the answers, religion doesn’t have the answers, art doesn’t have the answers…we need a hybrid that takes a bit of everything in order to find something to believe in,” says Damien Hirst, whose exhibition of mandalas, ritual geometric patterns used for meditation, at White Cube (until 2 November) had visitors queueing around the block when it opened last month. While Hirst—who has dwelt upon spiritualism and religion his whole career—says such works do not reflect any beliefs he may have, he observes: “Everybody’s on the lookout for something that can get them through the darkness.”

The retreat from religion, particularly among the left-wing art world, is a driving factor behind this rise in spirituality. “Organised Christianity has proven itself largely morally bankrupt,” says the artist AA Bronson, who first became interested in shamanism and alternative belief systems at the age of seven. “Perhaps the climate crisis and the recent uprising of young people suggests a new relationship to the natural and spiritual worlds. In my opinion this is a real shift in our cultural reality.” A work by Bronson’s collective General Idea is on show at Frieze London with Maureen Paley.

Marc Glimcher, the president and chief executive of Pace, echoes this sentiment. “For many, organised religion’s rejection of universality has left a gap,” he says. Last month, Glimcher hinted at his mystic depths by opening his new gallery in New York with a blessing from a shaman. It was, Glimcher says, “a moment for the family that is Pace to reflect and appreciate one another and the journey”. Glimcher observes “a growth in the search for an expansion of consciousness today; artists are often the first to recognise and articulate this”.

Many of these ideas have their roots in the counterculture of the 1960s and 1970s. “What Damien Hirst is doing [with the mandalas] isn’t particularly new; he’s just doing it in a more acceptable time,” says the dealer Alison Jacques. At Frieze London her gallery is showing works by Lenore Tawney who became deeply involved with spiritualist ideas in the 1970s. “When Lenore was exploring these ideas of Eastern philosophies and Western mysticism, she had a small group of mainly female followers but was quite marginalised,” Jacques says.

Today, such ideas have entered the mainstream and have become a saleable commodity. The new Pace gallery in New York has crystals embedded in its walls and the London gallery Sadie Coles HQ is selling “healing” gems and minerals in its pop-up shop with the US artist Andrea Zittel (open throughout Frieze week). Tarot, too, has witnessed a revival, this month: Taschen will republish Salvador Dalí’s 1984 tarot deck. Spiritualism has arguably been co-opted by capitalism and “spiritualist merch” is a booming business.

But some artists are more dismissive of the spirituality-meets-wellness industry. The artist Grayson Perry has produced a £95 yoga mat as part of his new exhibition at Victoria Miro, Super Rich Interior Decoration (until 20 December). The design bears the words “my spiritual side” on one buttock and the names of various star signs. “We are now in a post-materialist consumerist world where what we actually buy now is status around our virtue,” he says, referring to “that Gwyneth Paltrow world”. Meanwhile, the US artist Shana Moulton’s new video work commissioned by the Zabludowicz Collection in London (on view until 15 December) explores the relationship between spirituality and consumerism through her alter-ego Cynthia, who uses a clichéd cocktail of wellness rituals, new-age spirituality and crystals to cope with anxiety.

At Frieze London, the Parisian gallery High Art is showing wall hangings based on star signs by the French artist Mélanie Matranga. They are a reaction against the “positive affirmations only” use of astrology, says the gallery’s Romain Chenais. Also at the fair over the weekend, Goodman Gallery’s stand will feature the work of the intersectional preacher, yoga teacher and artist Tabita Rezaire (who is also included in the gallery’s inaugural show in its London space), who uses her “digital healing activism” to assist in the “dismantling [of] our white-supremacist-patriarchal-cis-hetero-globalised world screen”, she says.

As with any subculture that is embraced by the mainstream and commodified, has the concept of the spiritual lost its purpose? Hirst says: “I think everything is commodified, but you just have to believe that the commodification is not something that can corrupt it. I feel like that about art on a daily basis.”