Sotheby's sues Greece over its claim to ancient bronze horse

A case of man bites dog: auction house turns the tables on Greek government after it was forced to withdraw the figure from New York sale in May 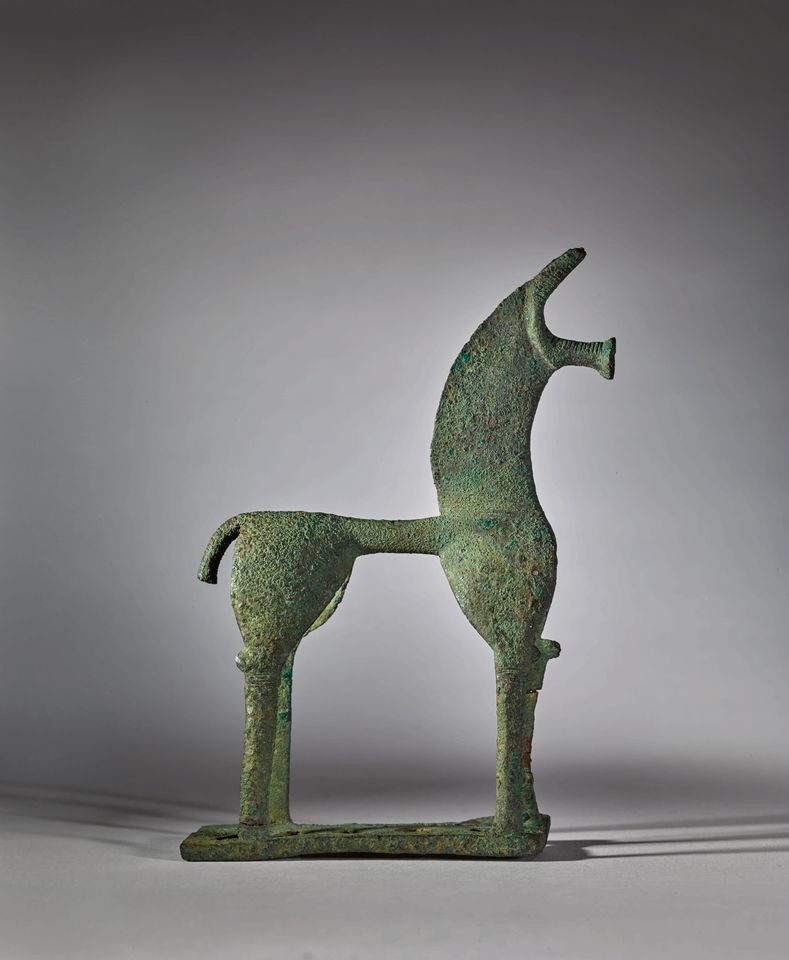 The ancient bronze horse was withdrawn from sale after Greece demanded its return, but now Sotheby's is fighting back Sotheby's

Sotheby’s is suing Greece in an unusual response to a Greek demand that the auction house withdraw from sale and return to the country an 8th-century BC Geometric Period horse. The diminutive bronze, which stands around 14cm high, was due to be sold in New York on 14 May, estimated at $150,000 to $250,000, but was withdrawn the day before the sale following Greece's objection.

The Greek government has alleged that the horse was likely to have been exported illegally from Greece. “There are no records in the archives of our service (ie; an export permit from Greece) to prove that this figurine has left the country in a legal way,” states a letter to Sotheby’s, dated 11 May, from Elena Korka, head of the General Directorate of Antiquities and Cultural Heritage.

In response, Sotheby’s says that there is no evidence that the horse was smuggled in violation of law. In its complaint, Sotheby’s asserts that “the bronze horse”, which was on the cover of the 14 May sale catalogue, “was acquired lawfully and in good faith by the late Howard and Saretta Barnet 45 years ago and has been part of their collection ever since.”

The Barnets acquired the object in 1973 from the dealer Robin Symes. It had previously been sold at auction in Basel in 1967, which, says Sotheby’s, renders irrelevant Greece’s invocation of the 1970 Unesco Convention on the Means of Prohibiting and Preventing the Illicit Import, Export and Transfer of Ownership of Cultural Property, to which Greece became a signatory in 1981 and which the US implemented in 1983.

Sotheby’s also argues that bronze horses of a similar style were created throughout mainland Greece and on Crete: “At least 1,100 such bronze horse figures are known to exist, and hundreds of such figures have been privately owned or in museum collections outside of Greece for decades if not centuries”.

The complaint continues: “As a practical matter, Greece’s claim to ownership of the bronze horse, however meritless, has impaired Sotheby’s ability to sell it on behalf of the Barnet Family.” Sotheby’s is asking reimbursement for court costs and attorneys’ fees, and whatever other relief the court decides.

The auction house’s legal manoeuvre is known as a declaratory judgment, an action that reverses the normal plaintiff-defendant roles in such a dispute, making Greece a defendant because of its assertions as a claimant.

Experts are divided on how the gambit might play out. Even if the Greek claim fails to pressure Sotheby’s into handing over the horse, the Greeks could punish the consignor by delaying the case, says E. Randol Schoenberg, the Los Angeles attorney who achieved the return in 2006 of Nazi-looted paintings by Gustav Klimt to the American heirs of the Bloch-Bauer family, the works’ pre-war owners.

“They could continue to cloud title to the work of art,” he says, “It’s one of the tactics you can use if you’re a claimant; often there’s not a lot of good evidence and you just want to keep the claim hanging out there, hoping that something else will show up.”

One expert, who asked not to be identified, says that Greece “has decided to go after as many things as they possibly can, not necessarily because they expect to get them, but because they want to make it unpleasant for the trade and thereby discourage activity.”