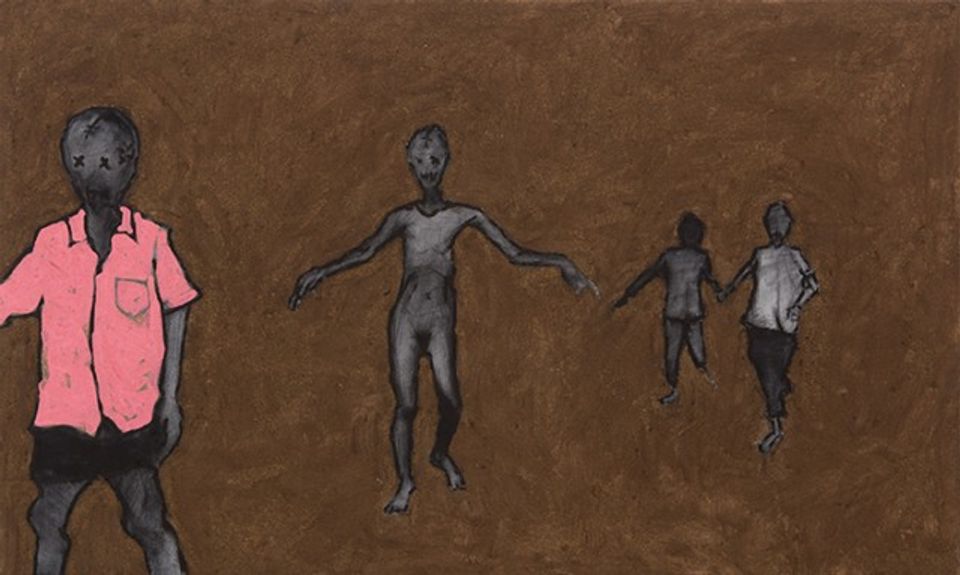 Mawande Ka Zenzile, who is one of three artists to represent South Africa at this year's Venice Biennale, is best known for his use of cow dung in paintings such as Untitled (2015) © Stevenson Gallery

A South African artist who has pioneered the use of cow dung in contemporary art, in hard-hitting pieces that have confronted torture and colonisation, was announced this week as one of three artists showing in the country’s pavilion at the 58th Venice Biennale (11 May-24 November).

Mawande Ka Zenzile was named alongside Dineo Seshee Bopape, whose installation work has addressed the epidemic of sexual violence in South Africa, and Tracey Rose, a performance artist and multi-media artist well-known internationally for her use of her own body in provocative pieces on gender and race.

South Africa’s Department of Art and Culture (DAC) was still in final contract negotiations this week with the pavilion's curators Nkule Mabaso and Nomusa Makhubu and their Natal Collective. The pair are based at the Michaelis School of Art at the University of Cape Town. The curators will explore the themes of social, political and economic resilience in post-Apartheid South Africa under the title “The Stronger We Become”, the DAC says.

Most of Venice’s biggest participants had named their chosen curators and artists for 2019 by last summer, and the long lapse in South Africa’s announcement fed rumours that it might not appear in the Biennale at all.

But Brendan Copestake, whose company Parts and Labour is subcontracted by the curators to manage the exhibition's technical installation in Venice, says the entry was in time to feature in the Biennale’s printed catalogue, a deadline that has been missed in the past. “We are also working with the friends of the South African Pavilion, an independent arts organisation that has been set up to assist with any short falls that the pavilion may have, and also provide support,” he said.

National pavilions from eight of Africa's 54 countries are expected in Venice this year, after several years when African art has been a particular focus of the global art scene. South Africa will work with other countries in the Africa Art in Venice forum.

Zenzile’s paintings using cow dung and oil, which he calls an answer to the Western tradition of painting, have featured powerful images including the famous figure of the “hooded man”, a torture victim in the Abu Ghraib prison. Other inspiration comes from the murdered African anti-apartheid campaigner and writer Steve Biko.

Sinazo Chiya, a spokesperson for South Africa’s Stevenson Gallery, which represents him, says he had pioneered the use of the material. “Cow dung is used often in home settings across South Africa and really across the world, in structures and surfaces, domestic settings and rural areas, he’s responded to that in fine art, spotlighting indigenous identities, practices and modalities .”