South Korea has the highest number of private art museums in the world, according to a new report. The country has 45 such institutions, with no fewer than 13 in Seoul, making the South Korean capital the world's top private museum city.

The Private Art Museum Report, an international research project initiated by the art collector database Larry's List and Art Market Monitor of Artron, is one of the first systematic efforts to understand the rapid rise of private museums over the past decade. The survey authors collaborated with 166 private museums from more than 40 countries.

The report found that there are 317 “privately funded contemporary art museums” around the world. A fifth of them opened just in the past five years. An astonishing 70% of the 317 museums were founded after 2000. On average, a private museum will have opened in 2003. 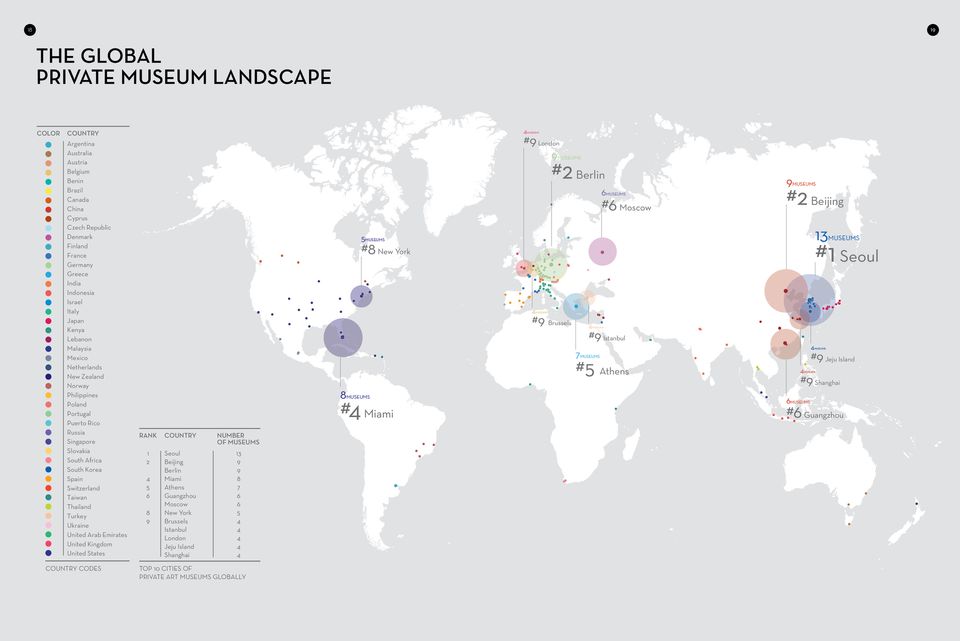 Seoul has the most private museums in the world. Image: © Larry's List

“Before our research, we found a lot of guessing and exaggeration on the situation of private contemporary art museums and at the same time we found very little data available,” says Christoph Noe, the founder of Larry's List and an author of the report. “Our motivation for the study was to get the facts first and to conduct a study as detailed as possible, directly also engaging with the private museum founders.”

Following South Korea (with 45 privately funded museums), the US ranks second with 43, followed by Germany (42), China (26), Italy (19) and Japan (11). After Seoul (13 museums), the cities with the most private museums are Beijing and Berlin (nine each), Miami (eight), Athens (seven), Guangzhou and Moscow (six each), New York (five) and, with four each, Brussels, Istanbul, London, Jeju Island and Shanghai.

Private spaces have been pulling in large crowds, often through innovative marketing and bigger budgets than government-funded museums. Around a third draw more than 20,000 visitors a year and the average size is 3,400 sq. m.

“What I personally found very exciting over the course of the study was to see the dedication and resources the collectors are putting into setting up and operating a private museum and by doing so they are very often filling a gap in a region’s museum infrastructure,” Noe says.

To produce the study, the researchers used the Larry's List database, conducted interviews with leading collectors and sent a questionnaire to the 317 private museums that it identified using the definition established by the International Council of Museums.

The report predicts that China and the Middle East will open more private museums in coming years. It also foresees greater cooperation between private institutions. According to the study, “During recent years, networks have been founded to increase the number of partnerships between private museums. Such cooperative relations will consist of loaning works, presenting travelling exhibitions and also sharing knowledge.”