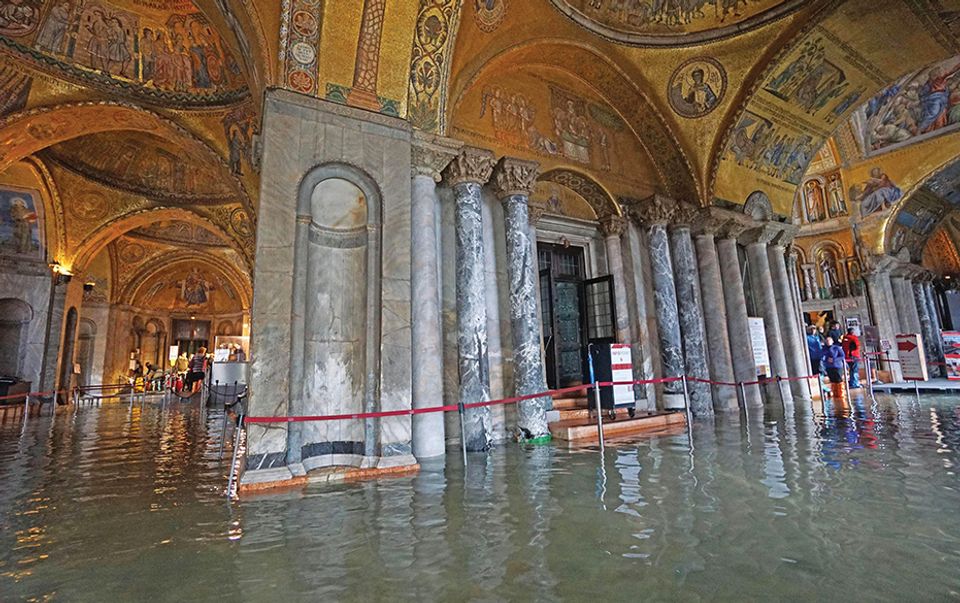 In October, water penetrated the main body of the Basilica for only the fifth time in its history © Andrea Merola/EPA-EFE/REX/Shutterstock

The administrators (Procuratori) of the basilica of St Mark’s in Venice have launched a strongly worded denunciation of the Italian government for its failure to protect the famous early medieval church from the flood waters that engulfed the lagoon city in late October.

In a statement, they said: “We consider that the state, which promised to protect St Mark’s and the entire city of Venice from flooding, should take responsibility for the immediate financing of the defence of the city, which is the heritage of the entire world.” A spokesman for the Italian department of culture and heritage declined to comment.

Carlo Alberto Tesserin, the senior Procuratore, said that the church had “aged 20 years in one day”. The flood waters reached 158cm above the measuring point (datum) established in 1897, and on 29 October, for only the fifth time in the church’s thousand-year history—but the second since 2000—water penetrated its main body, covering the inlaid marble floor in front of the altar of the Madonna Nicopeia and flowing into the baptistery and Zen Chapel.  The foyer (narthex), which runs the full length of the façade, was under 90cm of water for almost 16 hours.

The church is fragile because, behind the sheets of rare marbles cladding the walls, it is made of bricks “which the salts in the water cause to crumble, with the damp rising up many metres and attacking the ancient mosaics in the vaults”, Tesserin says.

The Procuratori have drawn up a list of works to be carried out, such as remedying the damage as best they can and building defences against future flooding events. “The initial amount needed is around €3m, with the basilica able to contribute €700,000,” says Pierpaolo Campostrini, an environmental scientist and a Procuratore.

The mobile flood barriers under construction at the openings between the sea and lagoon were supposed to be finished by 2011, but now the estimated date for them to start working is 2021. Even then, St Mark’s Square and the basilica will need local protection because, at 80cm above datum, they are the lowest lying part of Venice and it is not anticipated that the barriers will be closed until flooding reaches 110cm.

The reason for limiting the closures is the trade-off between the need to minimise the damage to the ecology of the lagoon that cutting off the sea will do and the need to protect the city.

Campostrini says: “A plan to defend St Mark’s Square up to [the level of] 110 cm is required, but the project to do so, launched in 1998, has not been completed. A new, simpler initiative has been proposed to protect the basilica against a level of 88cm above datum, which is scheduled for completion by the end of the year.”