In a long-running legal battle, the Shchukin Gallery seeks the return of five paintings worth $63m that the gallery says were taken by a Russian financier 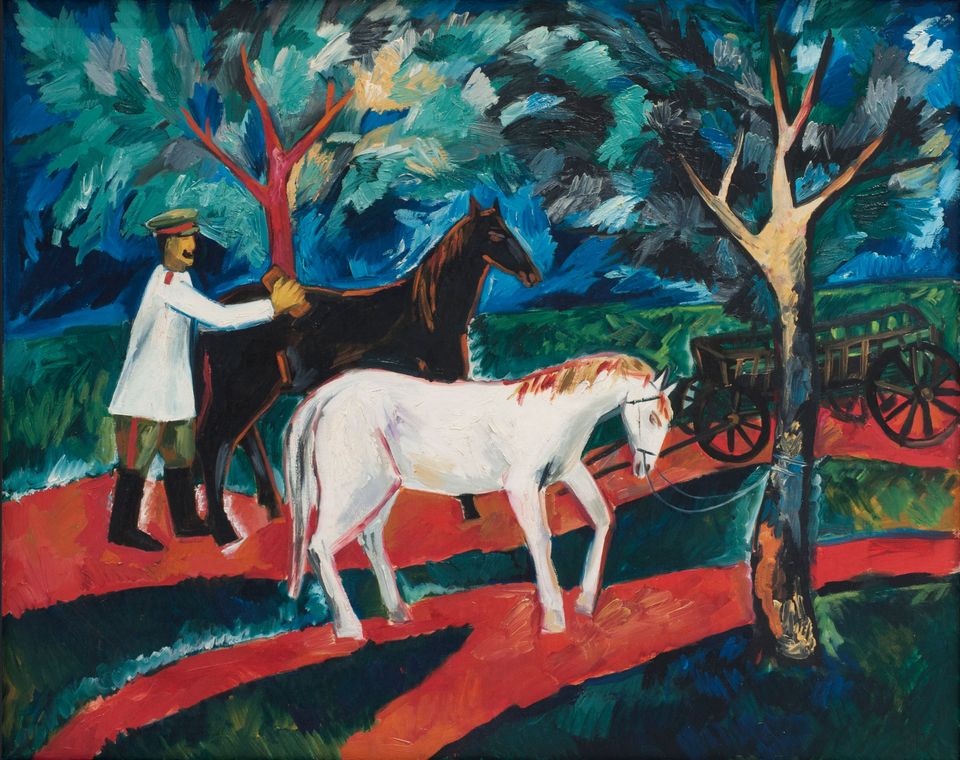 Natalia Goncharova's Soldier Washing Horses (1910), valued in court documents at $6m, is among the works that a gallery's lawyer says were taken 'hostage' Courtesy of Shchukin Gallery

In a long-running court battle, the Shchukin Gallery is seeking the return of five paintings by Kazimir Malevich and Natalia Goncharova worth $63m that the gallery says were taken by a Russian financier and have remained hidden ever since.

Back in 2013, Rustam Iseev, a Russian financier and client of the Shchukin Gallery, introduced the investor Vladislav Gershkovich to the gallery’s owners, Nikolai Shchukin and his wife, Marina, who were looking for capital to finance the purchase of five-early 20th-century paintings, three by Malevich and two by Goncharova. This introduction would result in years of bitter multi-jurisdiction legal filings, the most recent of which, initiated in April by Shchukin’s lawyer Stephen Weingrad of Weingrad & Weingrad, is seeking nearly $950m in damages and attorney fees for what Weingrad calls an “art hostage situation”.

According to Weingrad, Gershkovich helped Shchukin Gallery purchase the art in exchange for a percentage of the sum reaped when they were sold. A year later Shchukin Gallery, which had spaces in Paris and Estonia, opened premises in Chelsea in New York, with a room dedicated solely to the five paintings in question.

Alex Rosenberg was brought in to appraise the works in July 2015 and valued the five paintings at a total of $63m. It is at this point, Weingrad says, that Gershkovich demanded that Shchukin guarantee him a return on his investment or pay him back. But the paintings had not sold at that point, so Gershkovich instead negotiated a higher stake, including interest on his original investment, and increased control over the works.

A month later, Iseev allegedly approached Shchukin with a potential buyer interested in purchasing the entire collection, with one caveat: the buyer, a Russian oligarch, wanted to see the paintings on the wall of his New York apartment before he would commit to the purchase. “Normally, when art changes hands, there’s a piece of paper signed, like a receipt. That makes sense, right?” Weingrad says. “Based on an oral agreement and a handshake that he was taking the art to this oligarch’s apartment, Iseev flies to New York and loads the art onto a truck.” He adds: “Shchukin was so excited about the sale, they even helped him. But when they brought out the paper for Iseev to sign, he drove off.”

What followed was a stream of negotiations and settlement agreements, followed by lawsuits and countersuits filed in the US, France and Estonia, with multiple parties claiming to have rights to the paintings, the location of which has been hidden from Shchukin since 2015, according to Weingrad.

According to court documents filed by Weingrad, Iseev, who had stored the “hijacked” art in a Chelsea warehouse, saw an opportunity and refused to return the art without a signed agreement saying he was entitled to a $2m stake in the paintings, which he then allegedly backdated to 2013 to make it appear as if he gave Shchukin a loan around the same time that he introduced the gallery to Gershkovich. A few months later, in October 2015, Gershkovich again restructured his deal with Shchukin, this time gaining 50% ownership of two paintings by Goncharova and two paintings by Malevich.

All of these agreements, Weingrad says, were contingent on the art being returned to Shchukin: If the gallery did not sign, it would not get the art. But without the art, the gallery could not repay the debt it had agreed to. By May 2016, Iseev, Gershkovich and Shchukin mutually agreed to resolve their differences by using the art as collateral for a loan through Berlin Bank in Paris, which reviewed Rosenberg’s appraisal and agreed to lend Shchukin $5m using the art as collateral. For his part, Iseev agreed to ship the art to the Paris bank, and on 18 May of that year even used his credit card to confirm the shipping charges. But minutes after that confirmation, Iseev is said to have cancelled the shipment.

The same day, a court in Estonia ruled in Gershkovich’s favour in a case he brought against Shchukin, terminating the co-ownership settlement agreement and awarding him full rights to the paintings. Gershkovich was also awarded interest in a number of properties owned by Shchukin as well as the right to seize funds in certain bank accounts as well as holdings in the galleries. Weingrad’s petition claims that Gershkovich or his lawyer (who also represents Iseev) called Iseev and told him to cancel the shipment.

The petition Weingrad filed in April asks the court to enforce the settlement agreements that Iseev and Gershkovich made with Shchukin and put a restraining order on all other judgments. But Irina Frolova, Gershkovich’s lawyer, does not seem worried by it: “The recent petition is nothing more than Mr Weingrad’s attempt to use the press in order to damage the reputation of named-by-him parties,” she tells The Art Newspaper by email.