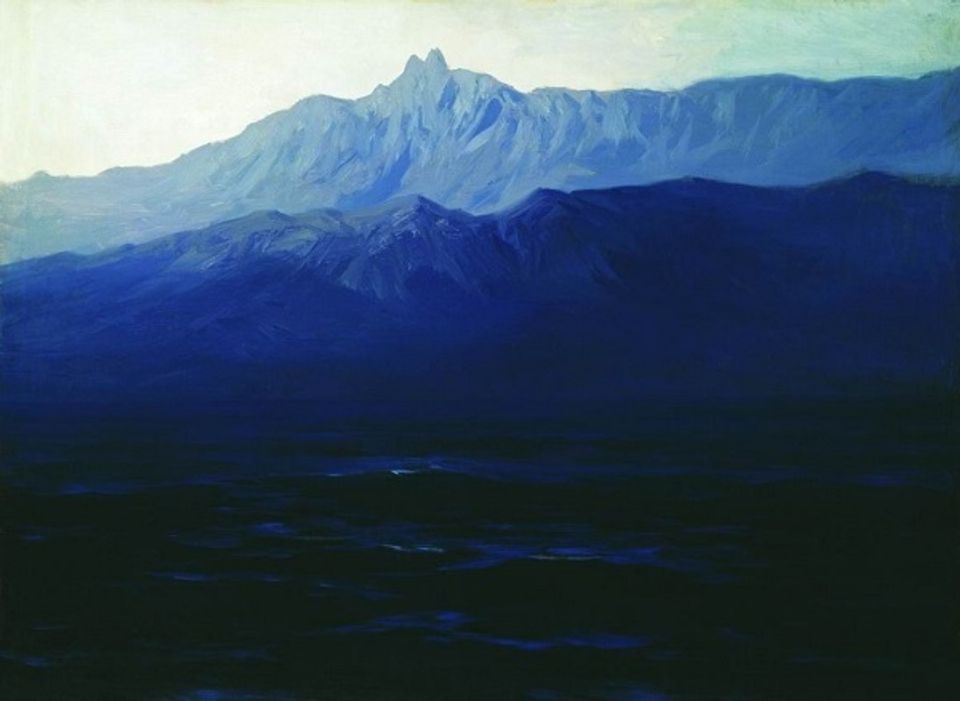 A man who grabbed a valuable late 19th- early 20th-century scene of Crimea by the artist Arkhip Kuindzhi off a wall at the State Tretyakov Gallery in Moscow on Sunday evening in full view of visitors and personnel, has been apprehended and the painting recovered. But the incident has raised serious questions about museum security in Russia and has inspired a slew of ironic memes.

The painting titled Ai-Petri. Crimea (1898-1908), has been on loan to the Tretyakov from St. Petersburg’s State Russian Museum for a retrospective (until 17 February) of works by one of Russia’s most famous landscape artists. It has resulted in long lines and extended hours since it opened in October. The exhibition is running at the Engineering Building annex adjacent to the gallery’s main building.

Security camera footage released on Monday shows a totally brazen act. A man who looks like any other visitor walks straight up to the painting, picks it up off the wall, and walks through the exhibition hall with it swinging from his right hand. Only the few people who had been standing immediately next to him look a bit stunned. No one else in the crowd appears to notice, some thinking he was museum staff it was later reported.

Irina Volk, a spokeswoman for Russia’s interior ministry said on Monday that a 31-year old man, who had been detained for drugs possession in December 2018 had been caught and that the painting was found at a construction site near Moscow. According to Tass, he could face up to 15 years in prison.

On Monday, Olga Golodets, a deputy prime minister who oversees cultural affairs, ordered the ministry of culture to investigate all federally-run museums for security compliance and hold extra training for staff.

Russian museums have been complaining of a security shortage since budget cutbacks in 2015. Mikhail Piotrovsky, the director of the State Hermitage Museum, lobbied for reinforcements from Rosgvardia, a national guard service created by President Vladimir Putin. A Rosgvardia official said on Sunday that the agency’s staff only man the entrance of the Tretyakov’s Engineering Building.

In May 2018, a visitor to the museum’s main building vandalised a painting by Ilya Repin, Ivan the Terrible and His Son Ivan (1885) with a metal security pole. Police are currently also investigating a report of a 16th-century icon missing from the storage of the State Historical Museum.

Zelfira Tregulova, the general director of the Tretyakov Gallery, said at a news conference on Monday that the Kuindzhi painting, which does not appear to have been damaged, would not return to the exhibition. A culture ministry official said it had been insured for 12m rubles, but denied media reports that it was worth $1m at auction, saying that a museum piece cannot have an estimated auction price. A Kuindzhi painting sold for over $3m at Sotheby’s in 2008.

Since the Ai-Petri depicts a mountain peak in Crimea, Facebook users compared the theft to Russia’s annexation of Crimea. Many also joked about similarities to a tragicomic Soviet film about two elderly men who steal a Rembrandt from a museum. Others suggested that the Tretyakov was spending too much time cracking down on unauthorised museum tours that have reportedly led to some people who were simply talking to each other about paintings from being kicked out of the museum, rather than guarding its treasures.