Sticking the knife into the patriarchy: Artemisia Gentileschi painting to be sold for the first time in Vienna 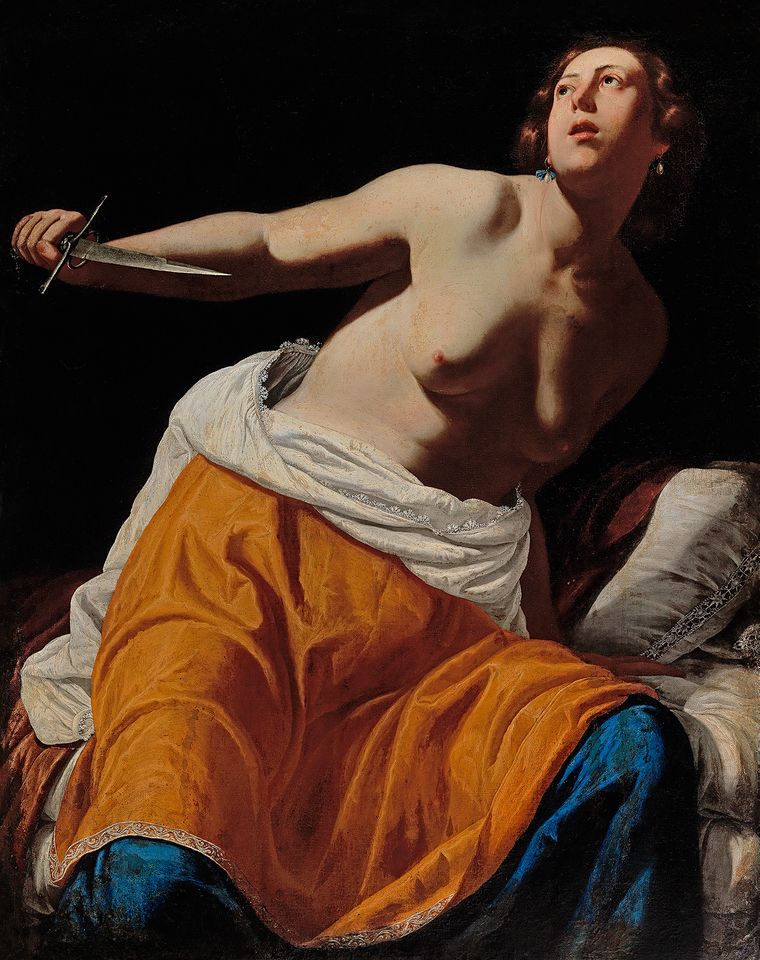 Lucretia, by the female Italian Baroque painter Artemisia Gentileschi, has never before been publicly exhibited Courtesy of Dorotheum

Never before publicly exhibited, this painting of Lucretia by Artemisia Gentileschi (1593-1654) will come to auction for the first time in its history at Dorotheum in Vienna on 23 October.

Gentileschi is one of the very few female Italian Baroque painters known today and her depictions of strong, embattled women have led her to become something of an Old Master poster girl for the #MeToo era. Tying into a wider reassessment of female artists of all periods, interest in Gentileschi's often violent depictions of strong female protagonists from classical mythology has risen sharply in the past year alone. In July, London’s National Gallery bought Gentileschi’s Self-portrait as Saint Catherine of Alexandria (around 1615-17) for £3.6m from the London-based dealer Robilant + Voena. The previously unknown painting had sold at Drouot in Paris last December for a record €2.3m, more than ten times the €300,000-€400,000 estimate.

The 2016-17 exhibition, Artemisia Gentileschi and Her Times, at the Museo di Roma has also drawn attention to her work and this painting of Lucretia was included in the exhibition’s catalogue by Nicola Spinosa in 2015, and in 2016, when he published it in the catalogue of the Gentileschi show in Palazzo Braschi, Rome.

Lucretia has been consigned from a private European collection, which it is believed to have entered it in around the mid-19thcentury, says Mark MacDonnell of Dorotheum. A painting of Lucretia entered the collection of the Jatta family from Ruvo di Puglia in the 19th century, and documents in the family archives refer to a painting of a belle donne nude con pugnale (beautiful nude women with daggers). Another depiction of Lucretia from the same collection by the 17th century Neapolitan artist Diana de Rosa is also included in the Dorotheum sale.

It is the first painting by Gentileschi that the Viennese auction house has handled—her work rarely comes up for sale, and the Artnet price database lists 62 auction entries, all modestly estimated. Lucretia’s cautious estimate of €500,000-€700,000 is, MacDonnell says, “very prudent, but not reflective of its commercial value which we expect to be much higher”.

“There has been a lot of confusion over the attribution of her work but both Nicola Spinosa and Riccardo Lattuada, who has examined the work in Vienna, are as convinced as we are that this painting is by her”, says MacDonnell, who has been working on the painting for six months. (The art historian Wolfgang Prohaska has also agreed with the attribution).

Although initially thought by Spinosa to date to Gentileschi’s Florentine period in the late 1620s, or early 1630s, he has since revised his opionion, believing it to have been done in her Neapolitan period, around 1640-45. Lattuada places it earlier in her Neapolitan period, around 1630-1635, due to its stylistic similarities to the works of Massimo Stanzione (who she worked with when she first moved to Naples in 1630) and Simon Vouet, an acquaintance from when she lived in Rome.

“Artemisia was a very controversial artist in her time—her rape trial [against the painter Agostino Tassi] created a certain notoriety. But she wanted to use this notoriety and she forced her patrons to confront these difficult, violent subjects of suffering and strong women,” MacDonnell says. Her work fell out of the canon during the 18th and 19th centuries, he says: “They were too dramatic, too violent, too indelicate for a ‘polite’ female artist, certainly in the 19th century. But, I think their power resonates with today’s climate.”